No. 1 Virginia pulls out miracle win over Louisville 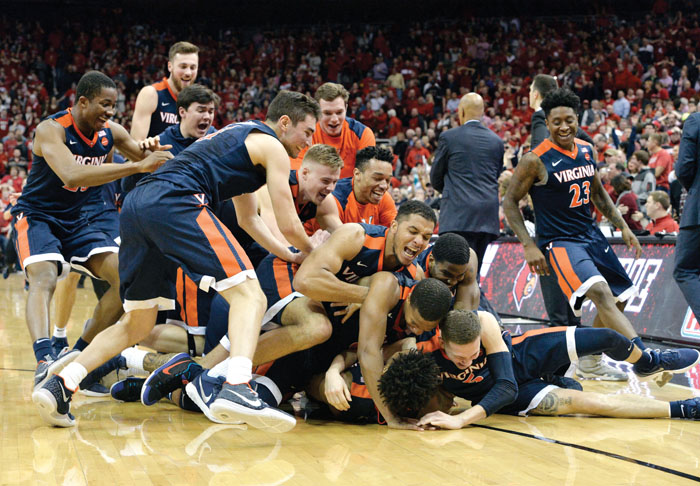 LOUISVILLE, Ky. (AP) — De’Andre Hunter’s only thought with 0.9 seconds remaining was how fast he would shoot the ball if he got it in his hands, though he wasn’t sure if his desperation heave from the left side of the 3-point circle had the distance or accuracy.

Fortunately for the Virginia freshman guard, his shot had the glass to bank it through as time expired, completing a rally from 13 points down and giving the top-ranked Cavaliers an improbable 67-66 victory Thursday night over stunned Louisville.

Next came the dog pile of delirious players celebrating in front of the Cardinals’ bench, with Hunter lost somewhere in the middle of it all.

“I just knew I had to get a shot off quick,” said Hunter, standing in a boot with his right knee wrapped in ice after turning it in practice this week. “The play wasn’t originally drawn up for me, but Ty (Jerome) told me to step back and if I had a look to shoot it. That’s what I did, and it’s my first game-winner ever.”

Hunter was called for charging with 38 seconds left, resulting in Ryan McMahon’s free throw a few seconds later that gave Louisville a 61-58 lead. McMahon added another free throw before Ray Spalding and Darius Perry each added two at the line to make it 66-62 with 5 seconds left.

Virginia didn’t wilt, answering with two free throws by Jerome with a tick left. A turnover by Mamadi Diakite put the ball in the hands of Louisville junior forward Deng Adel, who shuffled his feet while trying to inbound it on the baseline and was called for traveling.

“I kind of forgot I couldn’t move,” said Adel (18 points), who was consoled by Cardinal teammates after the buzzer. “Usually they allow me to run the baseline (and) will allow running the base line after a score. I just forgot I couldn’t take an extra step and I was just trying to get it to Darius.”

Hunter delivered with that final chance to help Virginia make ACC history as the first team to go 9-0 on the road in league play. That achievement eventually sank in once the Cavs digested arguably their biggest win this season in a charged, hostile atmosphere.

“I thought if we kept plugging, it was there,” said Virginia coach Tony Bennett, calling the milestone “a really good accomplishment.”

Jerome scored 21 points, including 18 after halftime, while Devon Hall and Kyle Guy each had 10 and Hunter seven as Virginia became the first ACC team with perfect road league record since Duke (8-0) in the 2011-12 season.

Louisville (19-11, 9-8) meanwhile was left to digest a disappointing loss after coming close to earning the signature win it sought to boost its NCAA Tournament hopes. Missed free throws down the stretch that could have sealed the win ultimately came back to hurt the Cardinals.

The loss spoiled the home finales for Cardinals senior Quentin Snider (13 points) and Anas Mahoud, whose two quick fouls in the second half sent him to the bench with four. Snider had three of the Cardinals’ 6 3-pointers on 15 attempts.

The Cavaliers didn’t flinch or fade despite trailing, and stuck with their game plan until getting a final chance that went through. Shooting 56 percent in the second half helped along with holding Louisville to 36 percent after halftime.

They also outrebounded the Cardinals 34-27.

Louisville: Facing a tall order against a Cavaliers squad that had beaten them five straight times, the Cardinals had their chances to seal it but missed free throws late before Adel’s turnover gave Virginia a final chance. With it went a golden opportunity to get the signature win they needed, one that they let slip away.