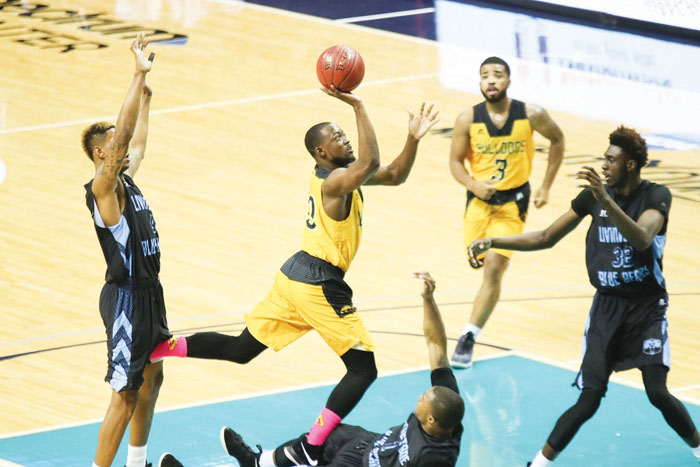 CHARLOTTE — Livingstone took things to the buzzer here Thursday night at the Spectrum Center, but the Blue Bears saw their season come to an end.

With just over a second left, guard Roger Ray’s long 3-point attempt from the right wing missed and Bowie State held on for an 80-77 CIAA Tournament quarterfinal victory.

The highly competitive, nationally-televised (Aspire Network) contest went back-and-forth throughout, and the Bulldogs (14-14) took command three times, only to see Livingstone (12-13) fight back.

Three free throws from Ahmaad Wilson gave Bowie a 75-67 lead with 1:47 left. But Livingstone’s Carmeron Burhannon, Wednesday’s hero with 33 points against Elizabeth City State, drained a long 3-pointer to get his team right back into the game.

Four free throws later, Bowie led, 79-71, with 47 seconds remaining and it was close to over for the Blue Bears.

However, Bowie’s Yohance Fleming fouled Burhannon and then he was whistled with a technical foul. Burhannon and Ray each sank two free throws and all of a sudden, Livingstone had pulled to within 79-75 at the 43-second mark — and had possession of the ball.

LC guard Ramel Belfield was called for a charging foul but his defense forced a turnover and Ray was fouled with 21 seconds left. Ray sank both free throws, slicing the deficit to 79-77.

The Blue Bears patiently tried for a steal, but finally had to foul, stopping the clock with just three ticks left. Wilson made 1-of-2 free throws before Ray’s final desperation shot.

Coach James Stinson’s Blue Bears started the game hot, running out to a 13-6 lead. But after the first TV timeout, the Bulldogs put together their own run and forced ahead. Bowie led at halftime, 42-36.

Led by Burhannon, Belfield, Rashard Todd, Navar Elmore and Ray, Livingstone pulled ahead at 60-59, with 8:07 remaining. A Burhannon free throw at 7:20 put LC up by two points but from that point on, the Blue Bears was fighting uphill again.

Burhannon, a senior, led the Blue Bears in his last game with 22 points, but was just 6-for-17 shooting from the field. He did make 9-of-10 foul shots.

Ray, a sophomore, scored 19, also sinking 9-of-10 at the charity stripe. Lydell Elmore, like his 6-9 twin brother Navar, a freshman, led the rebounding with six boards.

Jamison had a double-double for Bowie with 12 points and 13 rebounds. However, Omari George led the way for the Bulldogs with 27 points, including 17-of-21 at the foul line. Wilson scored 14 points for the winners.

Bowie moves into tonight’s semifinals against J.C. Smith, also at the Spectrum Center.