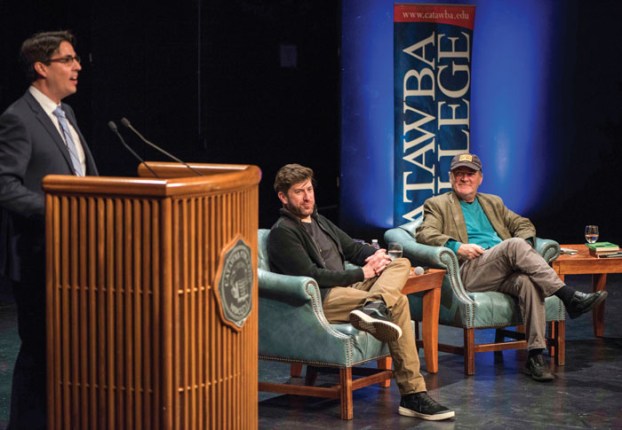 George Singleton and Tom Cooper, Southern authors with a sense of humor

SALISBURY — Everyone was laughing at Thursday’s Brady Author Symposium at Catawba College.

A smaller-than-usual crowd was enjoying authors George Singleton and Tom Cooper, who were reading from their works and answering questions, teasing each other and making fun of themselves and others.

Cooper, who appeared to be a bit nervous, loosened up and fed off Singleton’s jokes.

Singleton, in a baseball cap and sports coat, was just having a good time poking fun at his Southern home and some of the boring novels he’s read.

Forrest Anderson, a Catawba English professor, moderated the symposium. Anderson and Cooper were graduate students together at the University of Florida, and Anderson had taken one of Singleton’s classes.

Cooper is the self-deprecating type, talking about how poorly he writes. Singleton is a wickedly funny, no-nonsense, tell-it-like-it-is guy.

They make a good pair.

Singleton writes short stories. His observations on everyday life, the foibles of Southern characters and whatever else crosses his path are wry, sometimes profane and always funny.

Cooper, with one novel completed and another one on the way, is a little more cautious.

Singleton told of his circuitous route to finally finding his writing voice.

“I wrote a 400-page horrendous novel set in Paris because I had been there for three months. My professor said, ‘But you’re from Greenwood, South Carolina. Why don’t you write about that?’

“My second novel was 250 pages and took place in Washington, D.C., where I had spent nine months. My professor said, ‘You’re from Greenwood, South Carolina …’ ”

His third novel was set in Memphis, “where I had never been, and it was 400 pages.”

Cooper joked that he probably wrote 10,000 pages before he figured out what he was doing. Why keep at it?

“It takes mulish stupidity,” he said. “I don’t have any other skills. I’m horrible at guitar. … I don’t do anything special. You just play to your strengths.”

Singleton agreed he has no skills, either.

He remembers reading “Wuthering Heights” and Dickens, and “all that depressing stuff.” He was inspired by Henry Gibson on “Laugh-In,” who used to read silly poems.

“I read a bunch of stuff, then I wrote and hope I don’t get worse.”

He has a friend who completes about one short story a year.

“He sweats over it all. He calls me to tell me he changed a “the” to an “a.” But he gets in Atlantic Monthly and Esquire magazines.”

“It’s like the other guy is using a 22 and aiming precisely and taking a long time to do it. And I’ve got a shotgun and I just aim up in the air and boom!”

Cooper said his second novel was terrible, and he worked three years on it.

“I tried and tried. I changed names. I crossed out adjectives and adverbs. I put them back. …”

Six months ago, he sent it to his American and French publishers. And waited. He noticed the French publisher, who does meticulous editing of Cooper’s work, didn’t respond.

Cooper guesses the second novel is “unrelenting dreck,” and he figures, “Well, at least I wrote one book.”

So he started over. He went back to the Moleskin notebooks he used in high school and put the computer away. His novel, “Florida Man,” will be out later this year.

“That three years was not wasted time; it was necessary to learn.”

Singleton’s agent told him, “No more short stories. You need a novel.” So he got a new agent, who sold two short story collections and then died.

He has a new book of short stories coming, but his publisher made him promise to do a novel. “Sure, sure,” Singleton agreed. “What else could I do?”

He admits that the older he gets, the less pleased he is with his verbs.

This prompted a question — do the writers have a support network?

“I don’t,” Singleton said. “I have writer buddies, but we talk about fishing and cars and drink beer.”

Showing people unfinished work, he said, is like handing someone a raw egg so he can figure out if the cake will taste good.

Cooper doesn’t talk about writing, either.

”I think it sort of steals your thunder.”

Until he has completed the third or fourth draft, he never shows his work to anyone, but then he will talk to other writers. “The Marauders” was rejected by everyone.

“I was about to turn 40 and starting to wonder if I would ever publish.”

His brother made suggestions — take this out, change this character. His partner, Cathy, did the same thing, and Cooper was able to fix problems.

The inevitable question came, “Where do you get your ideas,” and Singleton joked, “Last night I stole Tom’s Moleskin for some ideas. … I’ll start writing and think, ‘Man, I wrote that story 20 years ago.’ How many strangers can you bring into town?” he asked, listing a number of plot lines.

“So I just put two people in an uncomfortable situation and see what happens.”

Cooper squirmed a little at the question.

“I live in New Orleans. It is unbelievable the chaos and confusion” and weird things that go on all the time.

“I just hang out at home with cats all day. Inspiration is not a big part of it. I just do it. It’s like fishing — some days you catch something, some days you don’t.”

Singleton was more concise: “Put your butt in the chair and do it.”

Cooper said one problem is that people don’t get bored anymore.

“They have all sorts of electronic devices, but they never sit staring at a wall and trying to amuse themselves.”

Singleton, who teaches at Wofford College, says he spends all day grading papers and “so much of the student writing is boring,” giving a silly example.

Cooper agreed he does not miss grading essays. “It affected my writing, some of it.”

He writes every day.

“I may get bored with a scene or a character and get up and walk around a lot. I talk to the cats, I email my mom.”

He’s also writing scripts for a TV show based on “The Marauders,” by the same producers who did “Breaking Bad.”

Singleton was a philosophy major, “so I read a bunch of that crap, but then I started reading Thomas Pynchon and Donald Barthelme and Cormac McCarthy. Then at 33, I started reading the classics. Now, I mostly read friends’ books. People keep asking me to do these blurbs.

“I love music biographies of the old blues guys,” Cooper said. “I always wanted to write about those guys — they really lived.”

Someone asked if the authors thought they were part of the genre called Rough South. Singleton asked if anyone had read the anthology “Grit Lit.” He said his problem with the Rough South label is there’s a lot of racism.

“I never use racial slurs or write about racism. It’s just not right,” he said.

Cooper joked that he’s not part of anything, maybe soft lit, “gritless lit,” he said, and everyone laughed.