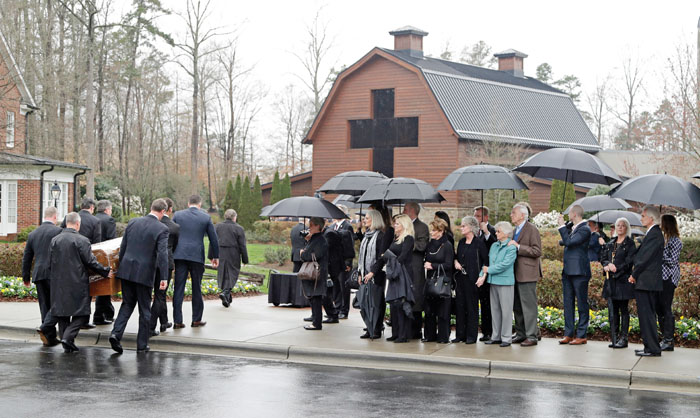 CHARLOTTE — As his public appearances dwindled in recent years, the Rev. Billy Graham began choosing songs, scripture and speakers for one last public opportunity to spread the Gospel — his own funeral.

Plans for Friday’s service took shape in the years after his last crusade in 2005 as he huddled with confidants and loved ones in his North Carolina mountain home.

Musicians who had shared Graham’s stage would sing.

Some of the best preachers Graham knew — his own children — would deliver personal messages.

And evoking the “Canvas Cathedral” revivals that helped launch his ministry seven decades ago, mourners would gather under a tent to pay their final respects.

For his family, the idea became capturing the feeling of the crusades that made Graham “America’s Pastor” and the world’s best-known Protestant preacher of his era.

“His fingerprints are on this service for sure,” family spokesman Mark DeMoss said in a phone interview. “The Graham family has long considered that his funeral eventually would really be his last crusade.”

Graham, who died last week at age 99, brought a message of salvation to millions during visits and live broadcasts to scores of countries.

While the invitation-only crowd Friday on the grounds of his Charlotte library is limited to 2,000 or so, internet live-streams are will allow many more to watch at noon.

The service will feature songs from gospel musicians who performed at Graham’s crusades: Linda McCrary-Fisher, Michael W. Smith and the Gaither Vocal Band. They are all friends who sang for Graham at his home in recent years, DeMoss said, adding: “They’re not just artists.”

Graham’s oldest son, the Rev. Franklin Graham, will deliver the funeral message after shorter addresses by his other children.

The service, expected to last about 90 minutes, also will include prayers by pastors from as close as Charlotte and as far away as Asia.

Afterward, Billy Graham will be buried next to his wife in a memorial prayer garden at the library, with his grandchildren serving as pallbearers. His casket was made of pine by inmates at the Louisiana State Penitentiary at Angola.

The grave marker reads: “Preacher of the Gospel of the Lord Jesus Christ.”

The funeral serves as the culmination of more than a week of tributes that included crowds lining the road for a procession from the mountains to Charlotte, where Graham grew up.

About 13,000 people — including former Presidents George W. Bush and Bill Clinton — filed past his casket during a public viewing in Charlotte this week.

And on Wednesday, Graham became the first private citizen since civil rights icon Rosa Parks in 2005 to lie in honor at the Capitol Rotunda in Washington.

Still, loved ones said Graham saw himself as a humble preacher who would have been embarrassed by such fanfare.

And most of all, to Graham, Friday’s goodbye marks an end only to his earthly journey.

“Do I fear death? … No. I look forward to death, with great anticipation,” Graham told a Newsweek reporter in 2005. “I am looking forward to seeing God face to face. And that could happen any day.”