Bella’s Bark and Brew to open in downtown China Grove 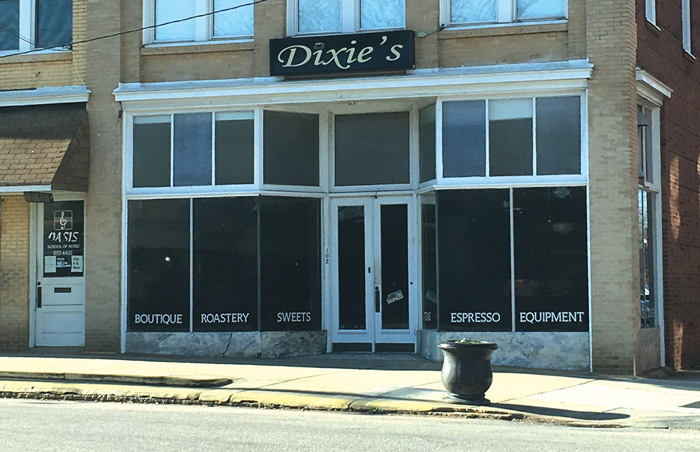 An exterior shot of Dixie's Roasting Company, which will soon be Bella's Bark and Brew. (Submitted by Jean Helms)

Jean Helms, owner of Bella’s Barkery in Salisbury, and her husband, Chris, have leased the building and plan to turn it into a dog-themed sports bar that will open in May.

“It’s not going to be the typical sports bar with jerseys everywhere. It’s a little bit differently themed,” Chris said.

“So we started thinking about other things that we could do. And Chris has always wanted to own a bar,” Jean said. “So then (we thought) how do we work it into Bella’s Barkery and creating a brand and still be a community outreach for the dogs?”

Jean said the idea for Bella’s Bark and Brew grew from there.

“We’re hoping that dogs will be able to come into the actual establishment. If not, we will make a nice patio area where that’s available outside,” Jean said.

“It depends on permitting,” Chris said.

Jean said only dogs on leashes would be allowed in and that owners would be “responsible for what their dog does.”

“Hopefully, people will know whether their dog can handle going to that or not,” Jean said.

Chris and Jean said dogs are not allowed inside businesses that cook food. But they think they’ve figured out a way around that.

“We’re partnering with some of the restaurants on Main Street to provide a modified version of their menu and then we will go and pick up the food,” Jean said. “We will have someone who is a designated runner each night that will go and get takeout and bring it back to the restaurant.”

Jean said they also plan to work with food trucks.

“And that’s kind of exciting because that will get a variety of food to China Grove and it will change. And we can gauge what people enjoy by how much they’re selling and have those back and then keep trying new things to keep it exciting,” Jean said.

Jean said they are also avoiding making the bar into a restaurant because they want to maintain the building’s “historic integrity.”

“We can’t tear it apart and turn it into an actual restaurant that requires fire sprinklers and things like that in the ceiling,” Jean said.

Jean described the building as having a “1930s speakeasy kind of a feel to it.” Chris said the details of the building are what drew them to it.

“We initially went there to rule it out. We were looking at another location in Kannapolis. So we just went there to rule it out and fell in love with the place,” Chris said. “It’s got the original floors with the all-glass tiles that were hand-laid. It’s got the original tin roof that’s still up in there. So it just sets up really nice for a bar.”

Chris said he’s always dreamed of owning a bar because of the “social aspect” of the business.

“There’s other places that serve alcohol down through that area but nothing where (it’s) more of a social gathering type area. There’s nothing like that in China Grove. So we’re hoping to bring that to it,” Chris said.

Chris moved to China Grove when he married Jean in 2013. Jean has lived in China Grove since 2004.

Jean said she remembers when Dixie’s used to have bluegrass music every Saturday morning.

“Saturday mornings is when all the community would just join there and make a big circle and play music for two hours,” Jean said. “And we’re bringing that back on Sunday. So we’re super-excited about that.”

“We want it to be a live music venue,” Jean said. “Every Friday and Saturday night is a party. It’s our party, and it’s not in our house. So I love that idea.”

When it opens for business, Bella’s Bark and Brew will be open from 5 to 11 p.m. Thursday through Saturday and noon to 6 p.m. Sunday.

“And then as we see that the community is interested in wanting to come other days, we’ll increase that,” Jean said.

The Helmses said they will also be open for special events like Monday night football and race nights.

Jean said they are hoping to open the bar by May 4, when China Grove will be hosting its first-ever First Friday.

George Singleton and Tom Cooper, Southern authors with a…