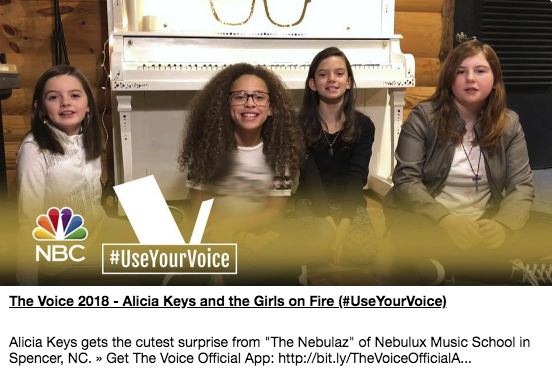 Today a special video was released on “The Voice” You Tube channel. The video features the girl band Nebulaz of Nebulux Music School (Spencer) and Alicia Keys. While noting Women’s History Month, the video is a testament to encouragement and inspiration.

Alicia Keys is a 15-time Grammy Award-winning singer/songwriter/producer, an accomplished actress, a New York Times best-selling author, an entrepreneur and a powerful force in the world of philanthropy and in the global fight against HIV and AIDS. Keys became a coach on NBC’s “The Voice” for its 11th season, alongside Miley Cyrus, Adam Levine and Blake Shelton.