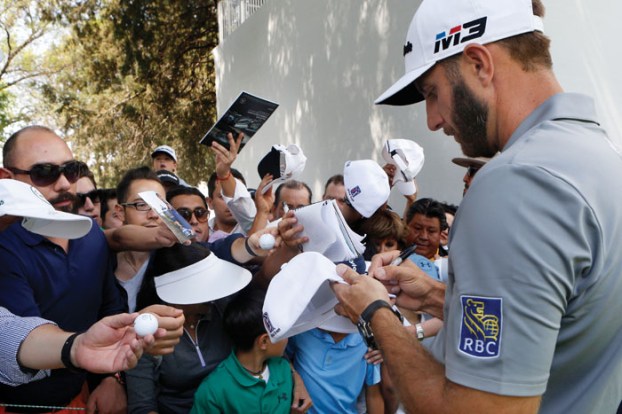 Dustin Johnson signs autographs for fans during during after practice round of the Mexico Championship, at the Chapultepec Golf Club in Mexico City, Wednesday, Feb. 28, 2018. (AP Photo/Marco Ugarte)

MEXICO CITY (AP) — One of the intriguing aspects of the Mexico Championship is the thin air and the long ball.

But that’s not what wins the tournament.

Dustin Johnson still smiles at one of the best shots he hit all year — a sand wedge. His lead was down to one shot when Tommy Fleetwood made birdie on the 18th hole, and Johnson tugged his tee shot into a wicked spot in the bunker.

“The ball was below my feet. It was not sitting great,” Johnson said. “And I didn’t really have anywhere to miss it coming out of where I was. It was either hit a good shot or I was probably going into a playoff.”

He hit one of the most underappreciated shots of the year to about 20 feet for a two-putt par and a one-shot victory. It was his fifth World Golf Championships title in his first start at No. 1 in the world, a position he has kept all year.

Justin Thomas was playing in the final group and remembers it well.

“Hands down,” he said when asked if it was one of the better shots of the tournament.

Thomas revised his assessment a few minutes later, only because he thought his 6-iron for a hole-in-one on the 223-yard 13th hole in the third round was pretty good. Even though a hole-in-one typically is a case where the hole gets in the way? “That’s where I was aiming,” Thomas said.

Back to Johnson’s shot.

“I was in the fairway and saw Tommy make birdie on 18,” Thomas said. “There’s a tree on the left that was in his way. The ball was below his feet, and there’s quite a bit of sand in those bunkers. He had to catch it perfectly.”

“We were walking to the green and converged about 20 yards short and I just looked at him,” Thomas said, raising his eyebrows. “He said, ‘I don’t want that one back.’”

One of Johnson’s biggest highlights this year was the drive he hit 432 yards, 6 inches on the 433-yard 12th hole at Kapalua, which he won by eight shots. In that case, the hole really was cut 6 inches from where his ball stopped rolling. It was a great shot to be anywhere on the green, and it was symbolic of Johnson’s power.

But there’s more to his game. And there’s a lot more to playing Chapultepec.

Jordan Spieth, whose 63 was the low round of the tournament last year, wasn’t in the final group and didn’t see the shot until it was shown on TVs around the club this week. He thought it was a reasonable example of how thin air and outrageous distances make for nice tales, but not necessarily trophies.

“There’s only a couple of holes where it makes that much of a difference,” Spieth said. “Length really doesn’t matter out here. One of the par 5s, No. 6, you can’t reach if you don’t have length. Other than that, it really doesn’t matter. What DJ did was control his distance and wedge play. If he’s doing that and putting well, then he’s really hard to beat.”

Spieth didn’t decide until last week to enter the Mexico Championship as he tries to find the right path to the Masters. He was slowed significantly by mononucleosis in December, restricting his preparations for a new year to just four hours of practice. But he felt good enough to play, and he feels like he’s hitting his stride.

He was the star attraction over the final two holes of his nine-hole practice round, mainly because of who was in his group.

It wasn’t Rickie Fowler, or Patrick Cantlay and Jason Dufner.

Lorena Ochoa, Mexico’s biggest golfing star even in retirement, came out to join them at the end. She has a monthly golf special on the CNN outlet in Mexico and played and talked with Spieth. Children surrounding every nook between stairs and stands, behind ropes and barricades, screamed out in unison, “Lorena!”

“I was super impressed how nice he was,” she said. “I hit the ball OK under pressure with him, and the group and the gallery. I’m happy I still have some golf.”

The field is 65 players after three players chose not to play, mainly for scheduling purposes — Henrik Stenson, Jason Day and Rory McIlroy. Hideki Matsuyama and U.S. Open champion Brooks Koepka are out with injuries.

That means Johnson is virtually certain to stay No. 1 in the world. Even if Jon Rahm wins, Johnson would have to finish worse than 58th. He is only the fifth player to stay No. 1 for an entire year since the ranking began in 1986.

“Had to put in a lot of hard work,” he said. And hit a lot of good shots, with more than just the driver.