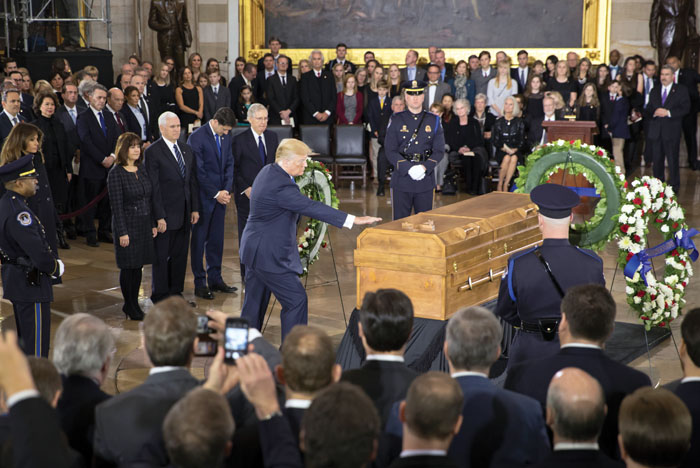 President Donald Trump touches the casket of Rev. Billy Graham, who died last week at age 99, during a ceremony in the Capitol Rotunda where he will lie in honor as a tribute to America's most famous evangelist, Wednesday. He is joined from by first lady Melania Trump, Karen Pence and Vice President Mike Pence, Speaker of the House Paul Ryan, and Senate Majority Leader Mitch McConnell. AP Photo/J. Scott Applewhite

WASHINGTON — The president gently touched the bare wood of Billy Graham’s casket. The speaker of the House bowed his head. And hundreds of other lawmakers, family and friends stood in a rare salute Wednesday to the man they called “America’s Pastor.”

“He ministered to all walks, from some of the greats whose statues line this hall — Eisenhower, King, Ford, and Reagan — to the everyday citizens lining up today to pay their respects,” said House Speaker Paul Ryan, gesturing to Graham’s casket under the eye of the Capitol Rotunda.

President Donald Trump, who met Graham but is closer to his son, Franklin, nonetheless recalled that the elder Graham had long been part of his life. Trump said his father, Fred, “said to me, ‘Come on, son … Let’s go see Billy Graham at Yankee Stadium.’ And it was something very special.”

He called Graham “an ambassador for Christ who reminded the world of the power of prayer and the gift of God’s grace.”

Graham’s influence stretched far beyond the city where he counseled presidents and lawmakers to a global flock over the better part of seven decades. He is known for having met every modern president, Trump included, and counseled most.

But he learned to be wary of the heat of politics. Close to Richard Nixon, Graham later said the details of the Watergate scandal made him feel used.

But the world of American politics and government embraced Graham on Wednesday, a week after he died at age 99. Those gathered, including Vice President Mike Pence, some members of Trump’s Cabinet and members of the House and Senate, stood around the casket.

They were ringed by paintings of the nation’s founders.

“The man we recognize today shared the Gospel with more people, face-to-face, than anyone else in history,” said Sen. Majority Leader Mitch McConnell.

As the leaders stood by the casket, Trump reached out to touch it. Ryan, nearby, bowed his head.

Some 30 family members accompanied Graham’s casket to Washington, where he had befriended presidents of both parties. Graham’s son, Franklin, tweeted a photo Wednesday of family members loading the casket onto a jet emblazoned with “Samaritan’s Purse,” the name of a Christian relief charity that he chairs.

Graham is lying in honor before a funeral Friday at his library in Charlotte, North Carolina.

The Rotunda entrances were draped with black fabric, and Graham’s casket rested on a black-draped catafalque beneath the soaring ceiling and its painting, the “Apotheosis of Washington.”

Former President Bill Clinton recalled seeing one of Graham’s crusades as a child, a profound experience that became more amazing over his life. Graham counseled him as Arkansas governor, and later as president in the White House itself.

“In that little room, he was the same person I saw when I was 11 on that football field,” Clinton said Tuesday after viewing the casket at Graham’s home.

In Washington, Ryan said there had been no doubt that Graham would receive the honor of a public viewing in the Rotunda. He told reporters that almost immediately upon hearing of Graham’s death he, Trump, McConnell and Rep. Patrick McHenry, who represents the Graham family’s district, agreed it would happen.

Graham shares the honor of a public viewing in the Rotunda with 11 presidents and other distinguished Americans, starting with Sen. Henry Clay of Kentucky in 1852 and, most recently, Sen. Daniel Inouye of Hawaii in 2012.

Graham is only the fourth private citizen to lie in honor since 1998. The others are two U.S. Capitol Police officers who died in the line of duty in 1998 and civil rights hero Rosa Parks in 2005.