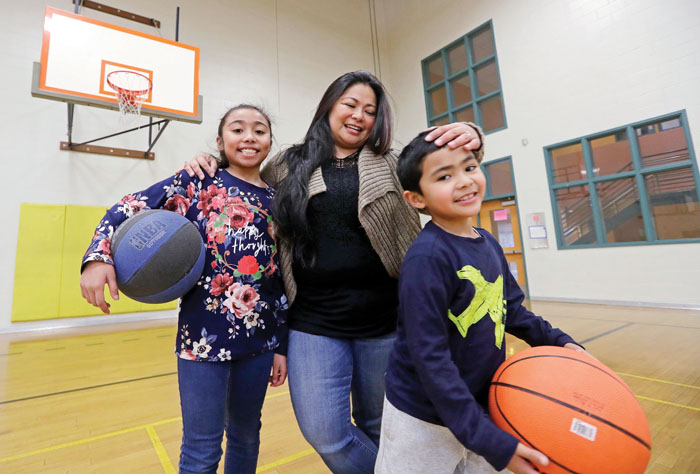 In this Thursday, Feb. 15, 2018, photo, Lara Mae Chollette, a coach of youth soccer and basketball, poses for a photo with her daughter Linda, 10, left, and son Jaylen, 7, at a community gym in Seattle. Horrific cases and allegations of predatory crimes against youth in gymnastics, swimming and football, among other sports, have jolted many parents who say they believe sports can be an important part of their child's development. Some now feel compelled to take a more cautious approach in monitoring adult interactions, as advancement beyond pee-wee leagues become increasingly coach-driven. (AP Photo/Elaine Thompson)

SEATTLE (AP) — With Olympic prodigies having just dazzled audiences worldwide, parents in the U.S. are reconciling the thrill of the gold with their fears from recent sexual abuse scandals in elite youth sports.

Shannon Stabbert said her 6-year-old daughter wants to be a gymnast, but the Seattle mother decided to put her in a martial-arts program instead.

“I have no doubt she will be quite amazing at gymnastics,” Stabbert said. “I just don’t feel like it’s a mentally, physically, emotionally healthy sport for girls.”

High-profile cases of sexual abuse and other predatory behavior in gymnastics, swimming and other sports have jolted many parents who believe athletics can be an important part of their child’s development. Some now feel compelled to be more cautious in monitoring their child’s contact with coaches and other adults.

Experts say the spotty rules and certifications for coaches and glorification of sports culture can make children who feel pressure to achieve even more vulnerable. No longer a casual pastime, sports teams can leave kids as young as 5 in the care of undertrained, undersupervised coaches.

Emmett Gill, a professor at the University of Texas and expert on the personal development of student-athletes, said success often means children leave their communities to compete, which can leave them at more risk.

“It’s clear that the coach’s responsibility, and their permanent goal, is to win, and that can sacrifice protecting vulnerable children,” Gill said. “We really have forgotten about that good, old neighborhood team. Now youth sports is a bunch of strangers on teams with the best athletes, with the purpose of winning.”

One national organization trying to prevent abuse of young athletes is the U.S. Center for SafeSport, a Denver-based nonprofit that formed last year.

It launched following the initial allegations of sexual abuse against Larry Nassar, the disgraced sports doctor for USA Gymnastics who will spend his life in prison for sexually assaulting some of the nation’s top gymnasts under the guise of medical treatment.

The U.S. Olympic Committee developed SafeSport, but it’s now an independent organization that works with law enforcement to investigate abuse allegations for the 49 Olympic and Paralympic sports.

In addition to offering an online link for anonymous abuse reports, SafeSport also provides educational and training material for youth leagues nationwide. The goal is to prevent abuse altogether.

“We have got to get upstream and do more to educate athletes, to educate parents, to educate coaches and to educate sport administrators,” SafeSport CEO Shellie Pfohl said. “I want every parent to know what questions they should be asking when they sign their child up.”

Since its inception, SafeSport has received 470 reports of either emotional or physical abuse, including 165 reports this year and 222 active investigations overall. In some cases, the organization didn’t have jurisdiction over a youth league to investigate an allegation.

Youth leagues outside Olympic and Paralympic sports don’t have a national organization to investigate reports of physical abuse, harassment, hazing and other issues. Many of those leagues have spent years trying to mute overreaching parents through codes of conduct but now have to walk the line between input and child safety.

“There’s a balance between appropriate parental involvement and engagement, meaning are there overzealous parents who may upset the team dynamic or be inappropriate in terms of their treatment of the coach or athletes, and balancing that with parental due diligence,” Pfohl said. “We want parents to be empowered to not only ask these questions but to hold people accountable.”

Gill, the expert on student-athlete development, urges all sports programs to create safety guidelines that clearly indicate the protocol for adults who suspect abuse. Though teachers and doctors must report it, coaches and volunteers do not.

“If we’re really about youth development and character development, this is going to be in front — and the most important part — of our bylaws,” Gill said.

Even the regulators are not immune. The chief safety officer of USA Swimming, Susan Woessner, announced last week that she was resigning after revealing she had kissed a coach accused of sexual abuse and later assisted in the governing body’s investigation of him.

Sean Hutchison is under criminal investigation after Olympic swimmer Ariana Kukors said he abused her as a minor. Woessner said she wasn’t in a relationship with Hutchison.

USA Swimming also issued a letter to parents saying it had failed members and its system was “not flawless” and vowing to “ensure that there is never a lapse of a support system again.”

For many parents, they say they will look to set more boundaries and ask more questions.

“Sometimes you kind of wonder: Am I missing something as parent? Am I not looking? Am I not asking the right questions? Am I trusting too much?” said Lara Mae Chollette, a Seattle mother of three.

Chollette, who works in human resources, said she’s also wondered lately whether parents should stay for lengthy practices. If someone else is watching her kids, she finds out the ages of the other siblings who may come along. Her husband also has made a rule against taking responsibility for another child for overnight trips.

As a coach herself of youth soccer and basketball, Chollette said she knows the schedules, other parents and how people come and go from the sports facilities, which is helpful.

This story corrects the spelling of Sean Hutchison’s last name.