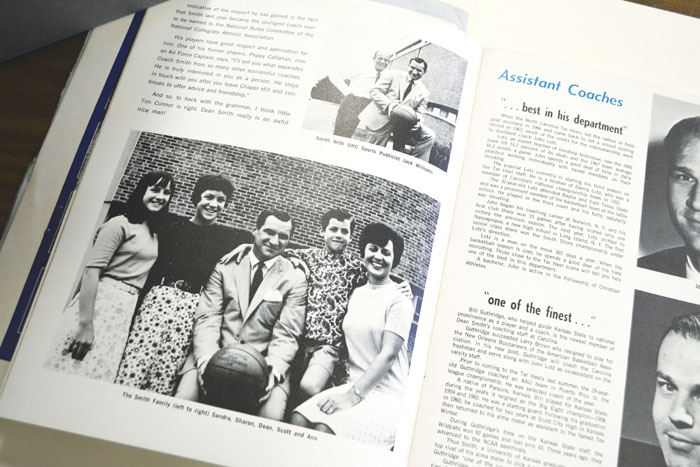 Dean Smith is shown with his first wife, Ann, and three of his children, Sandy, Sharon and Scott, in an early UNC program. Sandy Smith Combs lives with her family in Salisbury.

CHAPEL HILL — “Thanks go to my players. I do remember all of them.”

Those last two sentences in the introduction of “A Coach’s Life” are heartbreaking now, since Coach Dean Smith lost all those memories of his basketball players.

And yet, in the collection of Smith’s papers, they’re all there. Every single one of them.

Smith died Feb. 7, 2015. At the end of last year, his family donated some 12,000 items from his early years, career and life after retirement to Wilson Library at the University of North Carolina at Chapel Hill.

Part of the Southern Historical Collection, the papers are a fascinating look at not just the coach but the man.

Sandy Combs, one of Smith’s daughters who lives with her family in Salisbury, says her dad eventually decided to leave his papers to the university.

“He was encouraged by a lot of friends to preserve the history of the Carolina basketball program,” Combs says. “It humanizes him. Dad was such a humble man and never showy. He didn’t want to have a Dean Smith library. But I think he felt he needed to do this.”

It’s too hard now, but Combs says she hopes to see the collection at some point in the future.

“With this collection, you realize he was a wise and genuinely caring person. There was no magic about it. He cared about all people regardless of background or status.”

It’s a neat collection to consider just before our state — and indeed the entire country — is gripped by March Madness.

The vast collection is available to view by appointment. You can look at it online and request by email the files you’d like to see.

“Vast” is an appropriate word, as the collection takes up 52 feet of linear shelf space — about the width of a college basketball court. Newspapers, programs and magazines document Smith’s time at the University of North Carolina.

There are nearly two dozen scrapbooks, many compiled by his parents, that also follow his career. There are nearly 250 manila file folders kept after the coach retired in 1997. He continued to go into the office until his health prevented that in 2012.

There are photos, and there are also audio recordings of interviews Smith did with Sally Jenkins and John Kilgo in preparation for his memoir. Those recordings — featuring that flat, familiar Midwestern accent — will soon be available via streaming online.

There are strict rules and security for any papers examined in the Southern Historical Collection. People can check out only one box at a time, and you must take notes in pencil only.

The library’s fourth-floor reading room is a quiet place, save for the whir of the heat on a chilly day.

Starting at the beginning seems to be a good plan to tackle an afternoon’s worth of work. You could easily spend days here — maybe more — in order to see everything.

One folder documents a ninth-grade class recognition service at Lowther Junior High on Friday, May 24, 1946.

A souvenir program from the Cleveland Indians vs. New Yorks Giants game in Topeka on April 14, 1948. The program cost 10 cents and is filled in with pencil in a young Smith’s careful cursive with players’ names and statistics from the game.

Junior high and high school newspapers are darkened with age. Smith was captain of one of four boys football teams at Lowther Junior High, according to an edition of “The Key” dated Oct. 31, 1945. It noted Smith’s team had a perfect record of 4-0.

In the larger Emporia High School newspaper, Smith is shown as a trainer for the State AA basketball tournament in the March 14, 1947, edition, with Emporia called “the basketball capital of Kansas.”

Smith attended the University of Kansas and served in the Air Force before landing in Chapel Hill in 1958 as an assistant basketball coach. He became head coach of the Tar Heels a year later, a position he held for 36 years. He was coach of the 1976 Olympic basketball team, which included four UNC players: Walter Davis, Phil Ford, Mitch Kupchak and Tommy La Garde.

There’s a folder with expenses — many of them handwritten — from the Olympic training camp in Chapel Hill that summer. A trip to the Angus Barn steakhouse in Raleigh cost a total of $528.67 with a 15 percent tip. Tea was 25 cents, milk was 50 cents and an 18-ounce ribeye cost $17.10.

In another folder is a collection of Carolina Blue magazines, many of which chronicled the Tar Heels’ 1982 national championship run. Smith’s mother, Vesta, had written in green-tip felt pen, “Keep all articles.”

An article that ran Feb. 6, 1982, talked about “Michael Jordan, an exceptional freshman.” There were seven copies of an article that ran in the Topeka Capital-Journal on April 1, 1982, welcoming Alfred and Vesta Smith back home after they watched their son win his first national championship.

Lots of these articles are noted in Smith’s handwriting, “to folks” or “send to folks.”

An article in Business North Carolina in March 1989 called Carolina “the IBM of college basketball.” Smith received a copy from Paul Rizzo, then dean of the business school, with the handwritten notation, “Dean, IBM is proud to be in your company!”

The Salisbury Post made an appearance in the collection, as Smith received an honorary degree from Catawba College President Steven H. Wurster. The article was published on May 13, 1985.

A year later, an article in the Boston Globe said that Smith didn’t recruit as much as select his players. Smith wrote the reporter and thanked him for the complimentary article. In the P.S., however, he wrote, “I visited in 10 homes this year, and six chose other schools. We have received three commitments. That is not exactly ‘selecting.’ HA!”

A fan wrote to Carolina Country, an electric cooperative magazine, about a personal letter she’d received from Smith shortly after the team won the national championship in 1993. A maintenance man at the Smith Center brought in the clipping, Smith noted at the top of the page. “I guess the letters really are special to some people,” Smith wrote.

Like everyone else, Smith made long to-do lists, filling every line of an 8 1/2-by-11 notepad. There were wedding gifts to buy, car insurance to check on for a daughter — all checked off. The entry “Organize my tape room!” had not been struck through.

In September and October 1999, Smith wrote reminders to call Bob Knight, Lefty D, Walter Davis and Sam Perkins. He also listed thank-you notes he needed to write and airline reservations he needed to make. There was also a note to “Take video camera to beach with instructions!”

Matt Turi, who works in manuscript research, says there’s been intense interest in the collection. It was donated in 2017 and was processed fairly quickly, becoming available in December.

“As soon as the collection went up,” he says, “people wanted to come. They don’t mean very much sitting in the dark. That’s not what we want.”