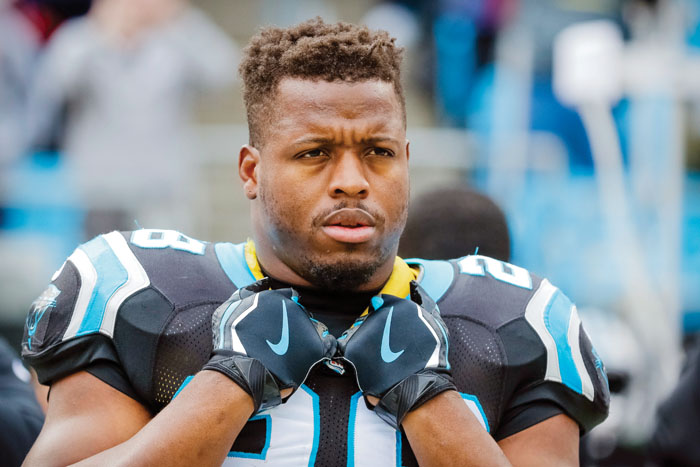 FILE - In this Dec. 24, 2017, file photo, Carolina Panthers' Jonathan Stewart watches before an NFL football game against the Tampa Bay Buccaneers in Charlotte, N.C. The Carolina Panthers released Stewart on Wednesday, Feb. 28, 2018. Stewart played all 10 seasons with the Panthers after being drafted by Carolina in the first round in 2008 out of Oregon. (AP Photo/Bob Leverone, File)

“Jonathan played the game the way you want. He brought an element of toughness as a runner that set the tempo for our team,” coach Ron Rivera said in a statement. “He is a great pro, and I appreciate who he is as a young man and thank him for the contribution he made.”

Stewart played all 10 seasons with the Panthers after being drafted by Carolina in the first round in 2008 out of Oregon.

INDIANAPOLIS (AP) — John Elway is giving his clearest indication yet that he’s going to pursue Kirk Cousins, the prize of this year’s free-agent quarterbacks.

“We’re going to explore all options in free agency and see where that goes,” Elway said Wednesday at the NFL combine. “Obviously we’ve got the fifth pick in the draft, too. That will all play into it. We’ll continue to look at all of the options out there when it comes to quarterback.”

The Denver Broncos general manager stressed that he’ll look at “anybody that won’t be under contract.”

With the Washington Redskins moving on to Alex Smith, whom they’ve agreed to acquire from Kansas City, that group of free agents would include Cousins, who figures to command more than the record $27.5 million that Jimmy Garoppolo will receive in his new deal with the San Francisco 49ers.

“Yes, the plan is to have them back,” Elway said.

That means, Elway will pick up Thomas’ $4 million bonus in March, which will keep the last two years of the wide receiver’s contract in place.

The returns of tight end Jake Butt and slot receiver Carlos Henderson, who spent their rookie years on IR last season, could help bolster the Broncos’ offense, as well.

Elway has been stung by the draft selections of Brock Osweiler and Paxton Lynch, but he hit the jackpot six years ago when he landed Peyton Manning.

The Broncos have missed the playoffs each of the two seasons after Manning retired, including a 5-11 season last year when they cycled through quarterbacks Trevor Siemian, Osweiler and Lynch twice .

“There is a possibility of some really good quarterbacks coming out of this draft,” Elway said.

Elway got burned two years ago when he moved up to take Lynch with the 26th overall pick only to watch him founder on the sideline most of the past two seasons.

“Believe me, I’m not done swinging and missing,” Elway said with a laugh. “Misses don’t bother me. We just have to figure out a way to get it right. That is what we are working on.”

Even with so much uncertainty at quarterback, Elway has been in a good mood this week.

“If there’s any year I wanted to play it was last year, to come back and play as a player and try to get things turned around,” Elway said. “Sitting in my chair was a long, long year.”

Elway is also a member of the league’s competition committee which has been discussing simplifying the catch rule that’s become so cumbersome in recent seasons and which commissioner Roger Goodell has put atop his offseason fix-it list.

Elway said the competition committee is making progress in that regard.

“I think it’ll be much simpler and I think everyone will understand what a catch is and what it isn’t,” Elway said. “I think that we’re in the process of everything that we covered so far, it’s going to be much better.”

So, “survive the ground” will soon be out of the NFL’s lexicon.

“Yeah, going to the ground, that’ll be changed,” Elway said.

Goodell wanted the league to go back and start from scratch after tweaks to the rule only made it more troublesome.

“Or let’s go back to what the old definition of what a catch was, right? Two feet down, control and move and then you’ve got a catch,” Elway said. “That’s what it’s going to be more like.”