NASCAR veterans aren’t pulling over for the rookies 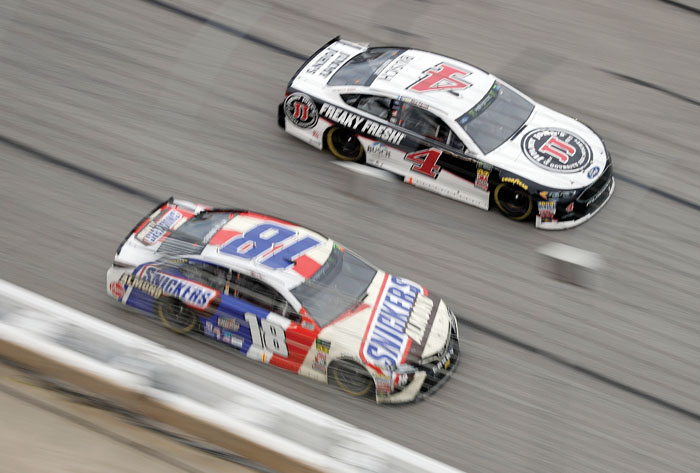 CHARLOTTE (AP) — Kevin Harvick put the brakes on the “New NASCAR!” movement with a dominating victory on a weathered old racetrack.

Away from Daytona, the veterans showed the young new drivers how to race on the dogged surface at Atlanta Motor Speedway. Harvick put on a clinic, and the top eight finishers were the familiar faces that seem to compete for wins every week.

All the new kids who sparkled in the Daytona 500 had their hands full at Atlanta, a track that requires an entirely different skill-set. In the season-opening showcase, the idea is to go as fast as you can while avoiding the mishaps of others.

But the style of racing at Daytona, as well as Talladega, comes just four times a year. The rest of the NASCAR schedule is where the true talent rises. So at Atlanta, where experience matters, the finishing order showed five former series champions — four Daytona 500 winners — cross the finish line in order.

“This is a racetrack that takes a lot of experience, and there’s a lot of things that you have to know about your car and know about the racetrack to get the car around,” Harvick said. “This is where experience pays off.”

That doesn’t fit the fresh narrative that came out of Daytona, where the new crop of NASCAR drivers ruled. Alex Bowman won the pole, Chase Elliott and Ryan Blaney won qualifying races, Blaney led the most laps in the Daytona 500, Austin Dillon won the race and Bubba Wallace finished second in his debut. At 27, Dillon is the oldest driver in that bunch.

The shift in focus to the new generation is not lost on anyone who follows NASCAR, particularly the veteran drivers. Some have nitpicked about the marketing push behind this “New NASCAR!” and they had to have felt the change in dynamic at Daytona.

Denny Hamlin, a former Daytona 500 winner who finished third in the 500 and fourth at Atlanta, shared his thoughts on Twitter on Monday night by posting a video of pro bowler Pete Weber screaming “Who do you think you are? I am!” after winning his fifth U.S. Open title in 2012. Hamlin added his own message: “All the old drivers after Sunday.”

A reply chided Hamlin that Elliott is the future, and “In a couple years you will be watching him win from your recliner,” the fan wrote. Hamlin didn’t back down. “Agree. But I won’t be on that recliner for some time,” he posted.

This isn’t about jealousy, rather reality. The older drivers know their laps are limited, but they aren’t going to simply go away. Experience matters and it’s going to take seat time for the newcomers to figure out how to contend on a weekly basis.

Elliott, for example, is winless in the Cup Series but has seven runner-up finishes. He’s still working on closing races. Kyle Larson was the same, and when he finally figured it out, he knocked out four wins last season and was a legitimate title contender.

Harvick noted there’s going to be a balance all season between the radically different ends of the spectrum. The younger drivers may have better finishes this weekend at Las Vegas because the track is “a little calmer with things that you don’t have to have in your memory bank.”

Clint Bowyer, who finished third behind teammate Harvick at Atlanta, believes there will be a better mix at Las Vegas because “it’s qualifying laps every single lap, and those kids will show back up.”

And when they do, there will be room for both new and old. Harvick, who has started the transition from race car driver to analyst with a radio show on Sirius and a recurring spot in Fox’s broadcasting lineup, understands its going to take everyone for NASCAR to go through these current growing pains.

“We’re in a great spot in our sport because we have these young guys that are fired up and can drive the car fast and have great stories and have ties to great family heritage,” he said.

“The diversity from young to old is something that we haven’t had in a long time, and we’re going to corral everybody to make sure that they realize that we all need each other in order to make this sport what we all want it to be.”