The greatness of Billy Graham 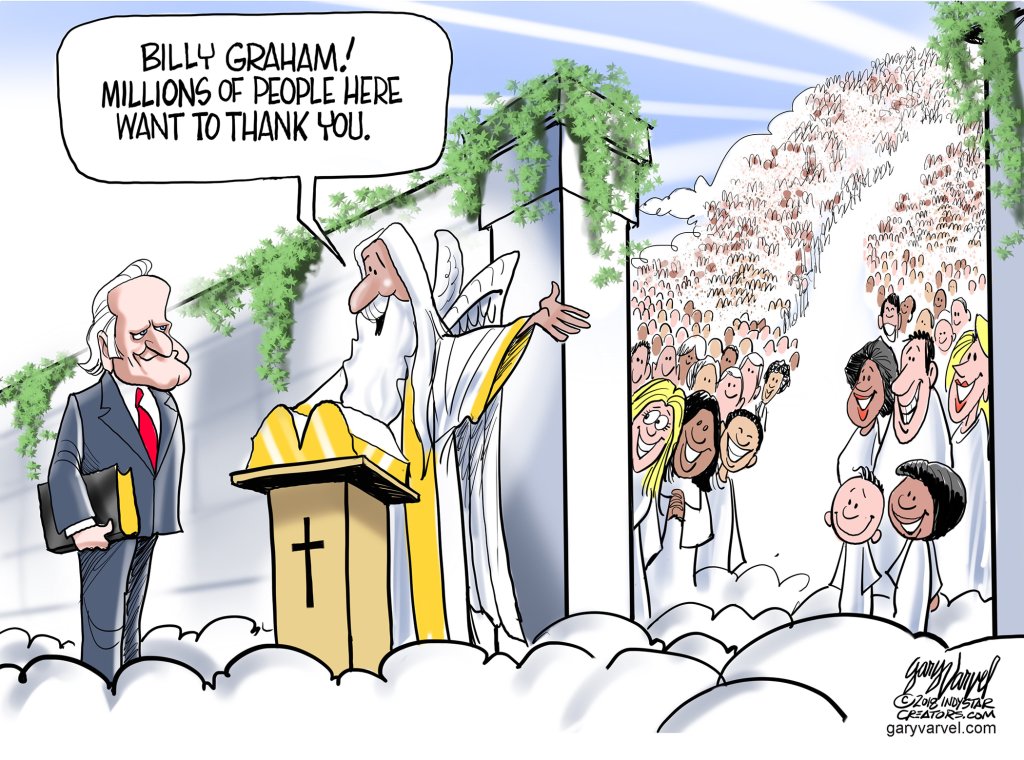 On Wednesday, the body of Billy Graham lay in honor in the Rotunda of the Capitol in Washington. He is only the fourth private U.S. citizen to be afforded that honor. He is recognized as the greatest Christian evangelist of the 20th century. He preached in person to over 215 million people. Untold millions more watched him on television or heard him on radio. What made this man great? Why did God use him so mightily? Consider:

1. He fulfilled God’s calling to be an evangelist. From 1947 to 2005, Billy preached 417 evangelistic crusades in 185 countries. Billy would go anywhere in the world to present the Gospel. God rewards faithfulness.

2. Billy kept his faith in the Bible as the Word of God. He quoted the Bible more often in his sermons than any preacher. He let the Bible preach itself and do its saving work.

3. He was a man of integrity. There was never a sexual or financial scandal in his life. He was never alone with a woman who was not his wife. He received a regular salary from his association. He was above reproach and therefore widely respected.

4. He knew service requires sacrifice. Billy loved his family. Yet, he would be away from home for as much as seven months. This was his cross. God’s kingdom took top priority.

5. Billy was a champion of human rights. In the early ’50s, when it could have ruined his career, he took the initiative to integrate his audiences. God blesses the just man.

6. Billy was a visionary. He used all forms of media to spread the Gospel. He was the first evangelist to use the power of television and movies. His radio broadcasts were heard around the world. He wrote a newspaper column and published magazines. He authored 33 books. Billy widely sowed the “gospel seeds.” They bore much fruit.

7. He was a leader of men. The Billy Graham Evangelistic Association (BGEA) was led by godly men brought together by Billy’s vision. Cliff Barrows and George Beverly Shea were the originals. Today the BGEA numbers over 500 employees. Billy gave God all the glory and his team all the credit.

8. Billy depended on the local churches. He would not hold a city-wide meeting unless invited by local pastors. The BGEA worked with churches to organize each Evangelistic Crusade. Billy worked with all Christian denominations. God blessed Billy’s ministry because he remained tied to the local church.

9. Billy was a humble servant of God and man. Although he was the counselor of 12 presidents, he regularly witnessed to individuals. The great theme of Billy’s preaching was the love of God. Billy demonstrated that love in his life and ministry.

10. He was a man of prayer. He once said that his greatest regret was not spending enough time in prayer. Yet, his evangelistic team saw him spend countless hours in prayer. Billy prayed and God heard him.

11. He was bold. When everyone else advised against accepting an invitation to preach in the Soviet Union, Billy listened to God and went to Moscow. His ministry in that communist empire changed history.

12. And finally, there was Ruth, his beloved wife. Billy often said that she was the finest Christian he had ever met. She was every bit his spiritual equal. Now he is reunited with Ruth. No more long separations.

In 1873, revivalist Henry Varley said to evangelist Dwight L. Moody, “The world has yet to see what God can do with a man fully consecrated to Him.”

In Billy Graham, the world saw what God could do with such a man.

Will there ever be another so greatly used to further the cause of Christ? Let us pray so! May God bless the memory of Billy Graham. Job well done, sir. Rest in the arms of our dear Savior.