Rev. Billy Graham was the same in public and in private, mourners say 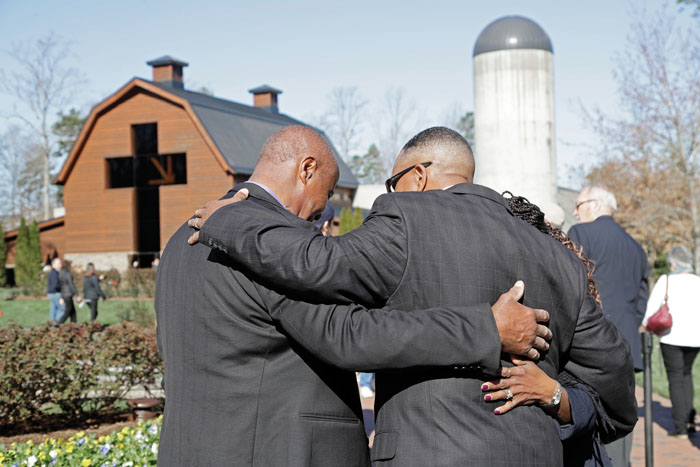 A group of people pray after paying their respects to Rev. Billy Graham during a public viewing at the Billy Graham Library in Charlotte, N.C., Tuesday, Feb. 27, 2018. (AP Photo/Chuck Burton)

CHARLOTTE — Former President Bill Clinton first saw the late Rev. Billy Graham as a boy when a Sunday school teacher took him to a football stadium for a crusade.

More than 30 years later, Clinton would join 10 other presidents who were ministered personally by “America’s Pastor.”

As Clinton paid his respects to Graham on Tuesday, one thing stuck out in his mind about those one-on-one White House chats.

“In that little room, he was the same person I saw when I was 11 on that football field,” Clinton said.

Clinton joined former President George W. Bush and thousands of other mourners to view Graham’s closed casket at his restored boyhood home. His library and headquarters of his evangelical center are on the campus in Charlotte.

Like so many mourners, Clinton recalled his first memory of that Graham crusade 60 years ago in Little Rock, Arkansas. He called it a profound experience in his life.

“I’m just here as another person — grateful,” said Clinton, who visited without his wife, Hillary.

Bush visited Monday and said Graham also had a profound impact on his life.

In an autobiography, Bush said Graham planted the seed in his soul that led him to recommit his heart to Jesus Christ during a private talk with the minister in 1985.

Clinton and Bush said they came early because they could not make it to Graham’s funeral on Friday.

Bush said his father, George H.W. Bush, won’t be there because of his health, and Barack Obama has said he won’t attend.

President Donald Trump plans to attend the funeral, held in a tent as a nod to Graham’s 1949 crusade in Los Angeles.

That crusade, which propelled him to worldwide fame, was held inside a circus tent. Graham first met a president in 1950, when at the invitation of a congressman he prayed with Harry Truman.

Dwight Eisenhower was the first to summon Graham to the White House, and every president up to Obama has either had Graham come there to meet personally or visited him in his home in the North Carolina mountains.

Graham said he learned something from talking to the powerful and the weak. “Whether the story of Christ is told in a huge stadium, across the desk of a powerful leader, or shared with a golfing companion, it satisfies a common hunger,” Graham said.

Graham’s body will be taken to Washington today to lie in honor at the U.S. Capitol.

He is only the fourth private person to have that honor since Congress allowed it in 1998, joining Capitol Police Officer John Gibson and Officer Jacob Chestnut, killed in the line of duty in 1998, and civil rights hero Rosa Parks in 2005.