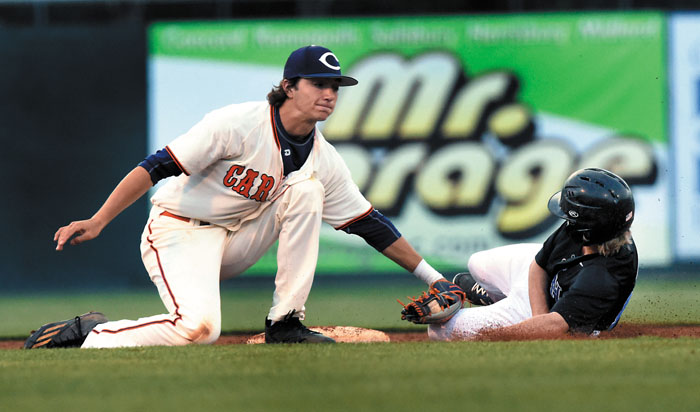 CHINA GROVE —There was a lot of buzz about Carson even before the team was handed the blessing/curse of a preseason No. 1 ranking in 3A by Impact Baseball.

Can this team really win a state championship after going 20-8 in 2017 and bowing out in the second round? Well, it might.

Cauble who took West Rowan to the state championship series in 2004, is the only head coach Carson has ever had.

If you’ve got deep pitching, you’ve got a chance to make some noise in May. Carson has its top three hurlers back.

South Carolina signee Owen White leads the staff. The right-hander figures to be as good as anyone in the state.

“Owen has put up phenomenal numbers, and he’s our No. 1, but after him, we’ve got 2A and 2B,” Carson coach Chris Cauble said. “Maddux has gotten bigger, he’s added extra velocity, and he’s putting it all together now. And Cameron has pitched as consistently as anyone we’ve got. He sneaks it by people. They don’t expect that kind of heat to come from that little body.”

Carson will have to get used to playing with scouts in the stands and radar guns being pointed whenever White pitches. He’s going to be drafted by MLB in June, although how high he goes remains to be seen. Baseball America doesn’t have White in its top 30 right now, but it does have him in the top 200. That’s from a pool of all the eligible college players as well as the high school seniors.

“How well Owen does this spring is going to determine whether he’s pitching for South Carolina next year — or pitching professionally,” Cauble said. “He’ll be successful either way. Great player. Better person.”

Beyond those three, there’s Pitt Community College commit Clayton Gilmore. The starting right fielder, he has a powerful arm and will get some innings. Cauble said his pure stuff ranks second on the team to White’s. Cauble is high on young lefty Logan Rogers. Deacon Wike, a transfer from East Rowan, may not make a huge impact this season, but Cauble expects him to be a critical arm in 2019.

Catching those folks will be returning starter Garrett Alewine.

“He was a rock and did a great job handling our pitching staff last year,” Cauble said. “His arm has gotten stronger and we also expect him to be a bigger part of our offense.”

Carson batted .279 in 2017 and usually didn’t scare anyone with the bats. Carson was shut out twice, and a 2-1, 13-inning loss at first-place West Rowan was the difference between tying for second place and winning the conference regular season..

Gone are infielders Logan Ridenhour and Ben Shoaf, who combined for 29 RBIs.

Carson’s best hitter last season — by a lot — was White. He batted .473 with 12 doubles, two homers and 22 RBIs. White is a smooth shortstop, so that’s where he’ll be stationed when he doesn’t pitch. Prugh figures to be the second baseman when Holshouser pitches and the shortstop when White pitches.

Cole Hales has a background as a pitcher, but he’s found a home at third base where Cauble loves his glove.

“He’s fearless, gets in front of everything,” Cauble said. “He makes amazing plays.”

A lot of Carson’s offense  should come from the three returning starters in the outfield. Luke Barringer, the 6-foot-5 left fielder, has power. He batted .297 and drove in 16 last season.

“He’ll give us some pop, some homers,” Cauble said. “We’ll be counting on him as one of the RBI guys in the middle of the lineup.”

Gilmore brings physical tools, as far as speed and arm, to right field. He batted .310 for the Cougars last season after transferring from A.L. Brown.

Then there’s center fielder Brycen Holshouser, who is coming off a successful summer with the Rowan County American Legion team. Holshouser batted .299 for Carson last year. He has the wheels to be a quality leadoff man.

Sollie Holshouser, the team’s third Holshouser, is a versatile player who can play infield or outfield. He’ll get at-bats. Tyler Thompson, mostly a third baseman, has a good stick.

Also keep an eye on freshman Cameron “CP” Pyle.  “If he keeps swinging like he’s been swinging, we’ll have to find a place for him,” Cauble said.

Zack Starnes, Garrett Early and Blaine Roberts are also going to have roles on the team.

Carson is in a different league this season, the 3A North Piedmont Conference. The league includes two of Carson’s biggest rivals, West Rowan and East Rowan. Cauble also expects South Iredell (17-9 last season) to be stout.

Playing in a six-team league instead of a 10-team league meant Carson had to find some non-conference opponents. Cauble purposely scheduled challenging teams such as 4A Myers Park.

Carson will again play in the Intimidator Classic Easter tourney in Kannapolis at the end of March.

Carson will get its basketball players late after the longest playoff run in program history. That list includes White, Prugh, Hales and Wike.

“Our schedule is tough,” Cauble. “We’ve got Mount Pleasant, Davie and Mooresville the first week. Maybe we’ll start out 0-3, but the plan is to take a baby step forward every day, try to keep getting better, and, hopefully, hit our peak for the playoffs.”

The short-term goals center on the NPC championship. Carson hasn’t won a regular-season title since 2013.

As far as long-term goals, you have to be a little lucky to get a shot at a state title, but Carson may be in the mix.

“The thing about baseball is the best team doesn’t always win,” Cauble said. “We’ve got to do the little things well. If we do them, maybe we can win some of those tight games we lost last year.”