National Guard honors those who helped with Operation Toy Soldier 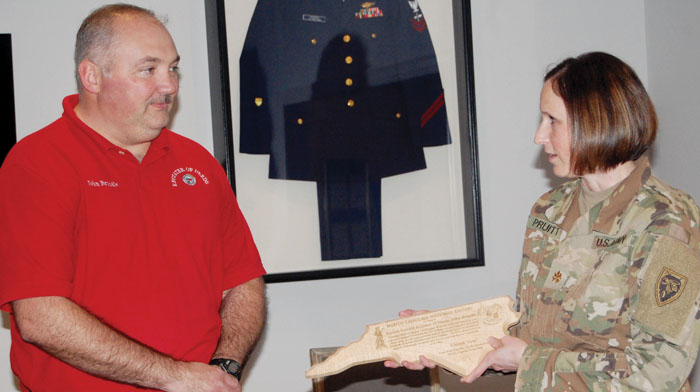 Maj. Michelle Pruitt of the National Guard presents Register of Deeds John Brindle with a wooden plaque for his work with the toy drive. Spencer Dixon/Salisbury Post

ROCKWELL — Rowan County residents were honored by the North Carolina National Guard for their work with Operation Toy Soldier on Monday at Powles Staton Funeral Home.

“Without all of your support, kids of National Guard members wouldn’t have had the Christmas that they did,” said Maj. Michelle Pruitt.

Operation Toy Soldier is an annual toy drive for the children of National Guard members. Throughout December, barrels are placed at businesses across the county for donations to be left. In addition, volunteers from the Rowan County Sheriff’s Office stand outside Walmart for 72 consecutive hours to collect toys.

Following the toy drive, donations are passed along to the National Guard for distribution.

“We have the easy part of collecting toys for the children,” said Russ Roakes of Powles Staton Funeral home. “The National Guard does all the hard work passing out the toys.”

Over the past four years, Operation Toy Soldier has collected more than 10,000 toys for children of National Guard members.

Before presenting the awards, Pruitt expressed gratitude on behalf of the National Guard.

“We had a great year, but without all of you, we wouldn’t be near where we are,” he said.

Powles Stanton Funeral Home, Lt. Mike Brady, Sheriff Kevin Auten, Register of Deeds John Brindle, and Arbe Arbelez were recognized for their dedication to the toy drive. Pruitt presented them with wooden plaques that were made by members of the National Guard.

“I am proud to have this on my wall,” said Brindle.

In addition to a plaque, Roakes received a special coin for spearheading Operation Toy Soldier for the past four years.

“Russ and the funeral home deserve a lot of credit because we couldn’t have done this without them,” Auten said.

Anyone who wants to be involved in the next Operation Toy Solider can contact Roakes at Powles Stanton Funeral Home, 704-279-7241.

“We are always looking for more people to help, more locations to place barrels, and more toys for the children,” he said.