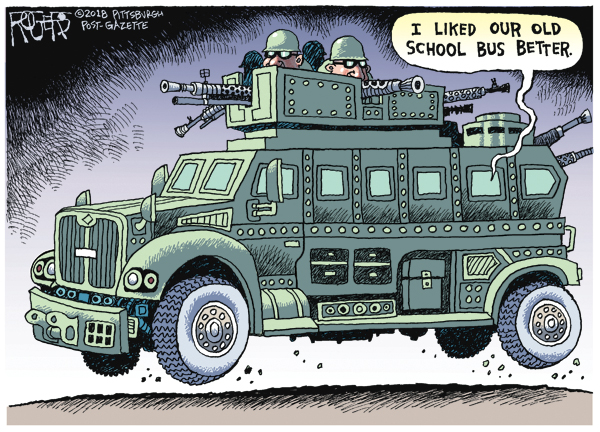 This is meant to offer a perspective many have not considered. I’m just gonna say it:

Arming teachers is asking them to be afraid. And that danger will be borne disproportionately by black and brown students.

These are the kids who already make teachers “afraid” by their existence alone. I speak from experience. I am an African-American and a former public-school educator. I saw how some of my colleagues were warier of a “Keisha” or more threatened by a “Lamar,” yet more tolerant of a “Chase” or a “Beth.”

This country already has a problem with the only group of public employees armed at the will of the state — police officers.

These are dedicated public servants who receive extensive training on assessing threats, de-escalating situations and on firearm usage. Yet this country has suffered the killings, at the hands of “highly trained” law enforcement, of too many unarmed, innocent young black men who were “perceived as a threat.”

And we want to arm less-trained, less-equipped individuals in often-fraught, under-resourced classrooms to take down a “threat” at will with lethal consequences?

Arming teachers with guns is asking them to be afraid.

We need to arm teachers, but not with guns. We need to arm them with better pay and more resources and stronger support. Doing so will be asking them instead to be encouraging and inspiring — the reason many pursued the lofty profession. Myself included.

This letter may rub wrong some who have never been stereotyped like I have, or profiled like I have. If you’re inclined to render an opinion, first consider what it feels like to “fit the description” for no reason other than the tone of your skin.

Bush: Graham knew who had the answers