John Hood: Taxes do have benefits — especially for roads 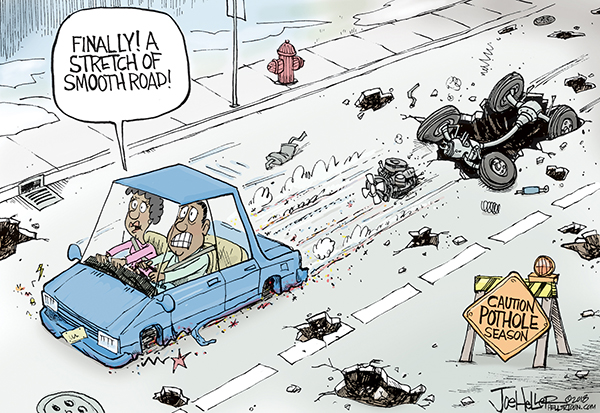 RALEIGH — Before the advent of the automobile — and thus before the advent of car and gas taxes to fund surface transportation — North Carolina and other states had public roads. They were built by conscription, not by tax-paid labor. And they were often pitifully inadequate.

Although the specific policies varied, here are the basics. Each county was composed of townships. Each township had a board of supervisors. They, in turn, appointed overseers for specific roads and bridges. Virtually every adult male was required to work a certain number of days each year. Overseers were responsible for assigning them to construction or maintenance tasks.

What happened if overseers and workers didn’t get their jobs done? They were subject to arrest, fines and other punishments. In practice, the system mostly relied on community spirit, peer pressure, and potential embarrassment. But the system didn’t work very well.

On Sept. 2, 1891, for example, the main newspaper in Caldwell County, The Lenoir Topic, republished an editorial from The Racket, a local scandal-sheet, on the poor condition of public roads. “The Grange road from Gamewell to Collettsville in Lenoir township was only worked one day a year and is subject to indictment for being out of repair,” it stated.

The man responsible for the road “was guilty of this misdemeanor,” the editorial continued, “and it is the duty of the supervisors to indict him, and if they cannot perform their duties they should resign.” The editor concluded from these and other examples that “taxation is the only thing that will give us good roads.”

A few days later, the overseer of the Grange road, Bristol Hood, responded in the Topic with a combination of contempt and indignation. He ridiculed the Racket as “a very popular paper, judging from the number of subscribers, which is about one dozen” and criticized the Lenoir Topic for reprinting the accusation that he was guilty of a crime without first asking him about it.

Then he turned his attention to the broader issue. “I agree with the Racket in regard to working roads by taxation,” wrote Hood, my great-grandfather, because public roads “can’t be marched along successfully in the line of progress without dollars and sense.”

Transportation has been and remains mostly a private affair. Individuals and businesses have built or purchased vehicles, fueled them, insured them and operated them. It was also feasible in most cases to charge users for using transportation infrastructure — think docking fees at seaports or river landings, fares for railroads and tolls at bridges. These were private goods, in economic terms, not public goods. Those who didn’t pay, either directly or by buying the goods thus transported, could be excluded from benefiting.

Surface roads were another story, however. It was very difficult to exclude non-payers. When turnpike companies, for instance, tried to collect fees, travelers often took rough bypasses called “shunpikes” to avoid the pay stations.

Until the automobile came along, then, roads were largely public enterprises. Major inter-city highways were financed by governments and often built by soldiers, as their main purpose was to move troops and messages. Minor rural roads and city streets, used more for commerce, were local responsibilities and, as in North Carolina, were built and maintained by domestic, not military, conscripts.

The 20th century brought welcome change. Gas-powered vehicles offered a market-friendly device — gas and car taxes — for users to pay for the overall road network roughly according to their use.

And substituting taxation for forced labor was clearly a more efficient way to finance local and regional roads. Conservatives and progressives agreed on that.

Bristol Hood was right about the policy, then — but that doesn’t mean I entirely buy my great-grandfather’s self-defense. According to family lore, he strongly preferred talking and writing to manual labor. A longtime justice of the peace, Hood often traveled the North Carolina mountains to teach poetry and literature.

Should itinerant poets be forced to build roads? No. Should they be compelled to pay for the roads they travel? Of course.

John Hood (@JohnHoodNC) is chairman of the John Locke Foundation and appears on “NC SPIN,” broadcast Fridays at 7:30 p.m. and Sundays at 12:30 p.m. on UNC-TV.