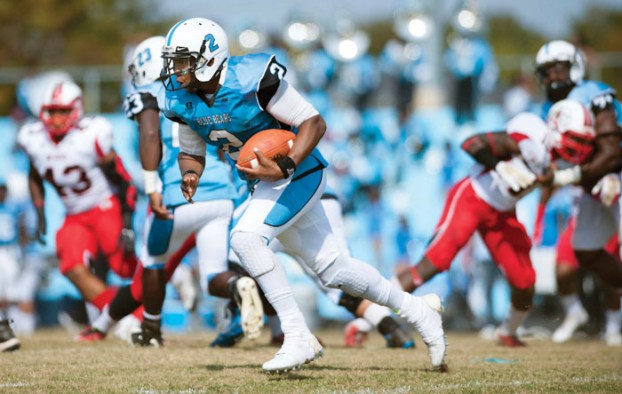 JON C. LAKEY / SALISBURY POST Quarterback Drew Powell (2), during a 2015 game for Livingstone. Powell is now playing for the Iowa Barnstormers of the Indoor Football League. 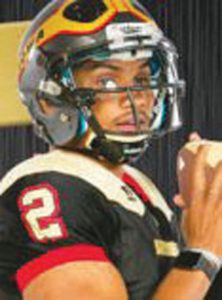 IowaBarnstormersPhoto
Quarterback Drew Powell of the Iowa Barnstormers (Indoor Football League). Powell, a four-year starter while at Livingstone College, was the IFL’s Week 1 Offensive Player of the Week. Feb. 28, 2018.

Staff report
DES MOINES, Iowa — Iowa Barnstormers’ quarterback Drew Powell was named the Indoor Football League’s Offensive Player of the Week for Week 1, the league announced Wednesday.
Powell is a former quarterback at Livingstone (2012-15), starting all four years during his career for the Blue Bears. During his senior season in 2015, Powell, a 6-3, 220-pounder, led the Blue Bears to a 5-4 season, the school’s first winning season in 17 years.
Powell earned IFL Offensive Player of the Week Honors in his first game with Iowa. He led the Barnstormers to a 41-20 win in the season opener against the Green Bay Blizzard.
Powell completed 20-of-26 passes for 208 yards and four touchdowns (no interceptions). He also ran 13 times for 48 yards.
After Green Bay had closed the gap to 27-20 in the fourth period, Powell threw TD passes to Roland Brady (10 yards) and Ryan Balentine (31 yards) to put the game away. The scoring toss to Balentine came with just 1:42 left in the game.
Powell played the last four games of the 2017 season for the IFL’s Nebraska Danger and rushed for 13 touchdowns. He followed Nebraska’s former head coach, Hurtis Chinn, to Iowa. Chinn is the Barnstormers’ assistant head coach/wide receivers this season.
Powell and the Barnstormers have a Week 2 bye before hosting the Arizona Rattlers on March.
NOTES: The Barnstormers’ special teams coordinator and defensive line/linebackers coach is Malcolm Nelson, a former assistant coach at Livingstone. … the Barnstormers have been around a while. The team is famous for giving a start to the career of Curt Warner, who went on to an NFL Hall of Fame career with the St. Louis Rams and Arizona Cardinals.
You Might Like

By David Shaw sports@salisburypost.com CHARLOTTE — Someone must have set Livingstone’s alarm clock for just before halftime Wednesday morning. It... read more