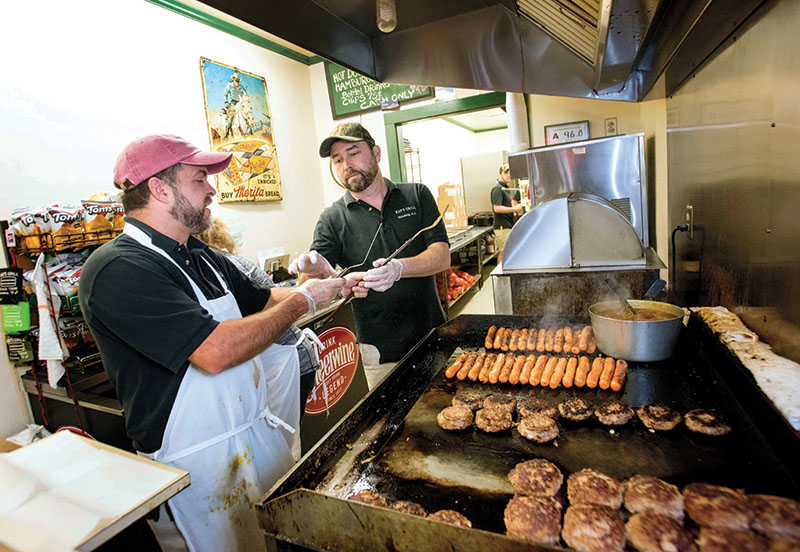 Greg Culp, left, hands off the fork and spatula to longtime associate Jamie Gobbel at Hap's Grill. Should Hap's be on D.G. Martin's list? File photo

Other North Carolinians sing the praises of Bridges, too. Famed novelist Ron Rash, when asked about his favorite place to eat, answered emphatically, “Bridges Barbecue in Shelby.”

Good, but there is a problem, as any barbecue lover can explain. There are two Bridges barbecues in Shelby. One is owned by the family of Red Bridges and the other by the family of Alston Bridges.

They are both mighty good and both have their ardent fans.

These two Bridges barbecues belong on everyone’s bucket list of North Carolina’s iconic eateries, the ones we should be sure to visit before we die.

Coincidentally, I am working on such a list for a chapter in a new Roadside Eateries book.

Here are some of my candidates for inclusion in any list of North Carolina’s iconic eateries.

*The group of seafood restaurants in Calabash: Together an icon for fresh seafood.

• Bum’s and Skylight Inn barbecues, Ayden: Two restaurants in the same small town that have attracted worldwide attention and praise.

• B’s Barbecue, Greenville: As described in Our State Magazine, “no phone, no frills, and no equal.”

• Cypress Grill, Jamesville: Down by the river, but open only during the season from January through April.

• Ralph’s BBQ, Roanoke Rapids: Much more than barbecue with a wonderful buffet.

• Sunnyside Oyster Bar, Williamston: Has been in operation since 1935 and is a mainstay in Martin County.

• Parker’s Barbecue, Wilson: Feeding the families of eastern North Carolina and beyond for over 40 years.

• Bullock’s Bar-B-Que, Durham: A fixture serving a diverse clientele since 1952.

• Short Sugar’s Pitt Bar-B-Que, Reidsville: Boasts about being voted Best Bar-B-Q in the nation by members of the United States Congress.

• Stephenson’s Bar-B-Que, Willow Springs: Since 1958, when the late Paul Stephenson switched from growing hogs to cooking them.

• Shatley Springs, Crumpler: From April through November, a popular spot for crowds who value this remote Ashe County spot for country cooking, the famous spring water, and beautiful mountain scenery.

What do you think?

I already have a reaction from my friend Randy Gardner, who wrote, “This is a mighty fine list. I would replace Stephenson’s BBQ with Hap’s Hamburgers & Hotdogs in Salisbury. And if pressed I would take Zack’s in Burlington over The Snappy. We ate at Doug Sauls’ in Nashville yesterday. It is really good BBQ. Good sides too; blackeyed peas, Brunswick stew, green beans, boiled potatoes, and of course, cole slaw. I ate at Wilber’s Tuesday and I swear to God, to paraphrase Bob Garner; ‘There’s none better’.’ In other words, it’s still the BEST.”

It was great to hear from Randy Gardner, but I would like to hear from you, too. Share your thoughts about the list by writing me at nceateries@yahoo.com.