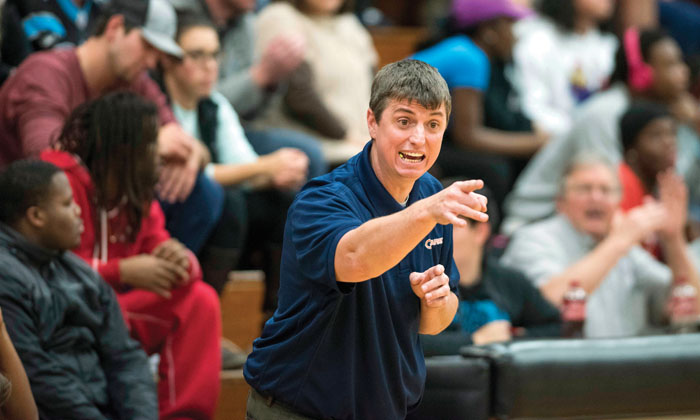 CONCORD — The final chapter of Carson’s history-making boys basketball season has been written — and it’s not a happy ending.

The high-flying Cougars put their season-long carpet ride in a full, upright position and came in for a landing Tuesday night at Cox Mill, where the state’s top-ranked 3A squad dealt them an 87-57 fourth-round loss.

“It’s sad,” coach Brian Perry said, moments after some 1,600 witnesses watched Carson put its most-prolific season to bed. “It’s not so much about losing this game. I’m just disappointed that I’m not going to be in practice with this group — as a team — anymore. It was such a good ride.”

It certainly was, but every song has a final verse — no matter how memorable or uplifting it is. Carson (26-3), as energized as it was entering the game, was no match for the Chargers and their hyperkinetic, Globetrotters’ style of play.

“We’re crying right now,” senior Jamarius Hairston said. “But when some time passes and we move down the road, we’ll look back at this and smile. All the memories, all the moments, they’re not going away.”

Carson’s season included four championships. The was the nerve-wracking, final-round victory over Salisbury in the Christmas tournament. Then came a 9-1 stroll through the North Piedmont Conference, followed by a splinters-and-all crowning performance in the conference tournament. Most recently, the Cougars outscored Charlotte Catholic to win a sectional title. Along the way, they went 13-0 on their home court; enjoyed winning streaks of 11 and 10 games; set a school record for victories in a season; and treated their armada of fans to a four-rounds-deep joyride.

“We had chemistry,” senior Jailen Williams said, a post-game smile masking his pain. “Most of us have played together since fifth grade. Chemistry got us through a lot. The love we have for each other did the rest of it.”

There wasn’t enough of either last night. Carson was repeatedly denied entry into the lane by Cox Mill wide-bodies Leaky Black — a 6-8 senior with a ticket punched to UNC — and 6-6 junior Wendell Moore, a acrobat in shorts who has already received offers from 15 Division I programs. That meant no drive-and-kick distributions by Williams and no well-measured 3-pointers by sniper Owen White.

“Their length was unheard of,” said Williams. “Wendell and Leaky both have about 6-10 wingspans. They forced us to change the angle of our shots, forced us to take shots we don’t normally take. It’s because they’re a great team.”

Hairston led the Cougars with 18 points, mostly on layups when he found wiggle room under the basket. Williams added 14, but couldn’t navigate through the trees and was essentially neutralized. And White — the senior who can dial one-plus-the-area-code with his eyes closed — made only one long-distance connection, a too-late-to-matter three with 3:05 remaining.

“Well, that was our plan,” winning coach Jody Barbee said, shortly after Cox Mill (27-3) won its 16th straight game and improved to 14-0 at home. “We didn’t want to get into a battle of trading 3-pointers with them. But with our legs we can speed people up, which we did. And with our length we can make them uncomfortable, which we also did. They don’t practice against us every day.”

All of which amplified Carson’s difficulty. The Cougars actually led for 33 seconds, using a pair of Williams free throws to go up, 9-8, with 3:14 remaining in the first quarter. Cox Mill responded with a 10-0 run, followed by a 9-2 run, followed by a 9-3 spurt. By halftime the Chargers owned a 46-22 edge and Carson, despite its best intentions, was running on fumes.

“Around the middle of the third quarter, I looked down at their bench and they were gassed,” Barbee said. “You could read their body language. And that was the objective. We wanted to run a lot of people in and out and wear them down.”

Moore paced all scorers with 22 points for Cox Mill, including nine in the third period. Black had 16 and 6-6 junior teammate Caleb Stone-Carawell contributed 15.

In the end, Carson’s reach never exceeded its grasp — and the climb was obviously worth the fall. “Brian took them as far as they could go,” Barbee said.

A kind sentiment, but it did little to soften the Cougars’ pain.

“Hey, I got to play basketball with my best friends,” Prugh said before the gymnasium lights were appropriately dimmed. “It’s as simple as that. I’ve never been part of a team this good. We reached some things that aren’t going to be reached for a long time.”

NOTES: Cox Mill will meet Greensboro Smith in the state semifinals Saturday at Lawrence Joel Coliseum. … The Cougars finished with six 3-pointers, a notch below their season average of eight per game. … The Chargers scored five baskets on slam dunks — three by Black, one by Moore and a final one by 5-10 reserve Khalid Davis.