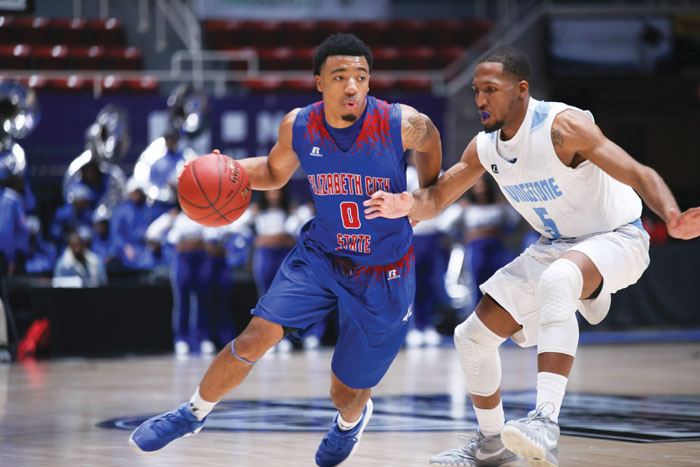 CHARLOTTE — Someone must have set Livingstone’s alarm clock for just before halftime Wednesday morning.

It took that long for the Blue Bears to shake off the slumber of a 10 a.m. start at Bojangles Coliseum, where they opened the CIAA tournament with a dizzying, 99-95 win over Elizabeth City State.

“It was a factor for both teams,” coach James Stinson said, after Livingstone (12-12) hurdled into today’s 9 p.m. quarterfinal against defending champion Bowie State at the Spectrum Center. “Our guys got enough sleep and were fully focused, but they may have been a little drained before the game. They had to get out and start doing stuff earlier.”

The Blue Bears shot 56 percent from the field (28-for-50), placed four scorers in double figures, won the rebounding battle and outscored ECSU 38-20 from the free throw line. But it was a seeing-is-believing shot by Livingstone senior Cameron Burhannon that woke everybody up as the first half expired. The 6-3 guard from Indianapolis corralled a defensive rebound, took one dribble and heaved a 55-foot desperation shot that caught nothing-but-net as the buzzer blared. As teammates raised their arms and fans whooped, Livingstone jogged to its dressing room with a 40-39 halftime lead.

“It was an amazing shot,” losing coach John Hill said, after the Vikings (12-14) ended their season on a two-game losing streak. “But after you play a good first half of basketball, when you’re ahead for almost all of it, you hate to be down like that at halftime. Still, I don’t remember any game ever being lost in the first half.”

Burhannon finished with a career-high 33 points. He shot 9-for-15 from the field, buried a pair of 3-pointers and converted all 13 of his free throw attempts.

“Honestly, I’ve been studying Kobe for like three days straight — back when he had the ‘fro,” Burhannon said. “Right now, we’re treating every game like it’s Game 7 of the NBA Finals. There is no tomorrow. But that shot, I spoke it into existence. I convinced myself to take it, even if I did shoot it off the wrong foot.”

Teammate Roger Ray found himself gushing over Burhannon’s prayer of a shot after contributing 21 points and four assists.

Of course, the halftime pep talk soon turned to finding a way to prevail. Stinson lit into the Blue Bears for their lackadaisical defensive play and carelessness with the ball. Ray took his turn and urged the team to tighten up.

Relief arrived quickly in the second half. Livingstone enjoyed a 15-2 run and went ahead, 55-43, when Burhannon sank two foul shots with 13:30 remaining. That flurry included 10 unanswered points, highlighted by Ray’s intentional pass off the backboard that teammate Navar Elmore slammed through the hoop.

The lead bulged to 75-58 when Ramel Belfield hit both ends of a one-and-one with 5:19 to play. But when ECSU junior Shyheid Petteway knocked down his third, fourth and fifth 3-balls within a 45-second span, the Vikings tip-toed within 96-92 with less a minute on the clock. It got as snug as 98-95 when Zaccheus Hobbs canned a 3-pointer from the top of the key with four seconds left.

“Livingstone is a good team with a good coach,” Hill said afterward. “This game is all about making plays and he put his kids in position to make them.”

The victory was Livingstone’s fourth straight and Stinson’s 200th since joining the LC staff in 2004-05. He previously won 272 games in 14 years at Barber-Scotia, which means that Stinson is just 28 short of the 500 career-win club.

“I’m just thankful to Livingstone and Barber-Scotia,” he said. “They gave me this opportunity. We really don’t keep up with a lot of the statistics, but when it comes along, we’ll take it.”

NOTES: Of the 52 fouls called, 32 went against ECSU. Two Vikings fouled out. … Hobbs and Petteway each had 29 points for Elizabeth City State, which shot 50 percent from the floor (31-for-62). … LC freshman Lydell Elmore had 15 points, eight rebounds and two blocked shots in his CIAA Tournament debut. … Livingstone is the No. 3 seed out of the CIAA’s Southern Division. It next faces Bowie State (13-14), the No. 2 seed from the Northern Division. The Blue Bears topped Bowie St., 70-63, at New Trent Gym on Jan. 10.