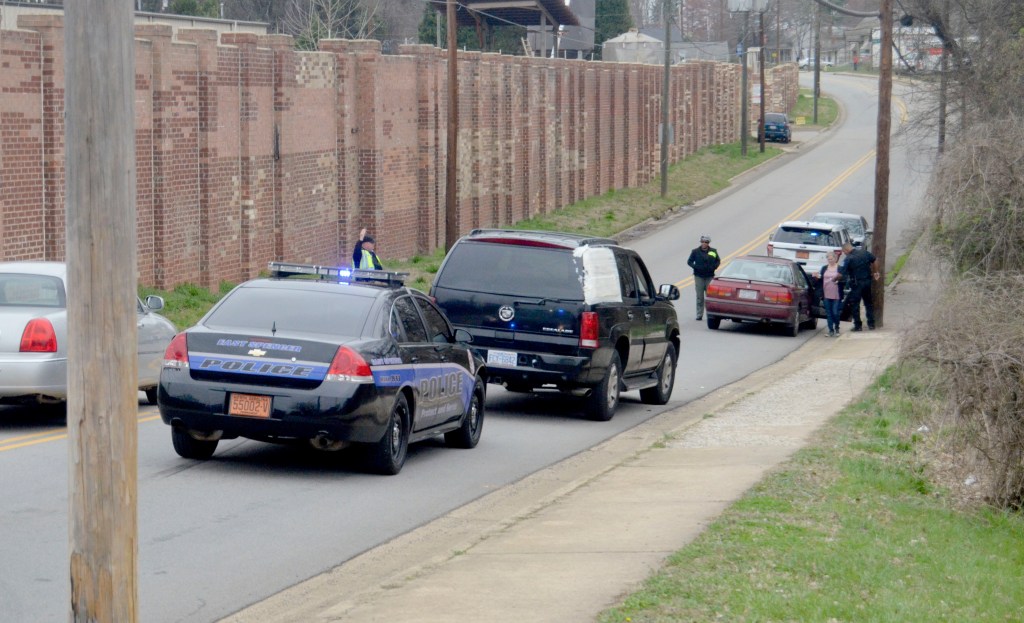 East Spencer fire and police respond to a traffic accident in which a man working on his disabled Cadillac Escalade, center, was trapped underneath after his vehicle was struck from behind. The accident occurred Wednesday at North Long Street, near North Street. The victim, William Wright, 51, was taken to Wake Forest Baptist Medical Center in Winston-Salem. Shavonne Walker/Salisbury Post

EAST SPENCER — Fast thinking by an East Spencer police officer enabled emergency personnel to quickly remove an Albemarle man who was trapped underneath his disabled vehicle after it was struck from behind.

On Wednesday morning, William Emanuel Wright, 51, of the 200 block of North Fifth Street, was underneath his Cadillac Escalade after he had trouble with the vehicle. He had his emergency lights on, but the vehicle was disabled in the middle of North Long Street, near North Street and across from Holmes Iron & Metal.

The East Spencer Police Department said Lindsey Anne Baker, 35, of the 2400 block of Applegate Drive, Concord, was heading north on Long Street when she turned her eyes away from the road to make sure her child was fastened in a seatbelt. When she turned around, she did not have time to stop before she struck Wright’s sport utility vehicle.

When she hit the SUV, the vehicle dropped on top of Wright, pinning him underneath it. The vehicle had been lifted off the roadway with a carjack, said Police Chief Sharon Hovis.

When police Officer W.C. Sanders arrived on the scene, he immediately cranked the carjack and lifted the SUV off Wright. East Spencer firefighters got to the scene shortly after and pulled Wright from underneath the SUV.

Police say Baker called 911. Authorities aren’t sure of the extent of Wright’s injuries, but he was taken to Wake Forest Baptist Medical Center in Winston-Salem.

Baker was cited for failure to reduce speed to avoid a collision.

National Guard honors those who helped with Operation Toy…