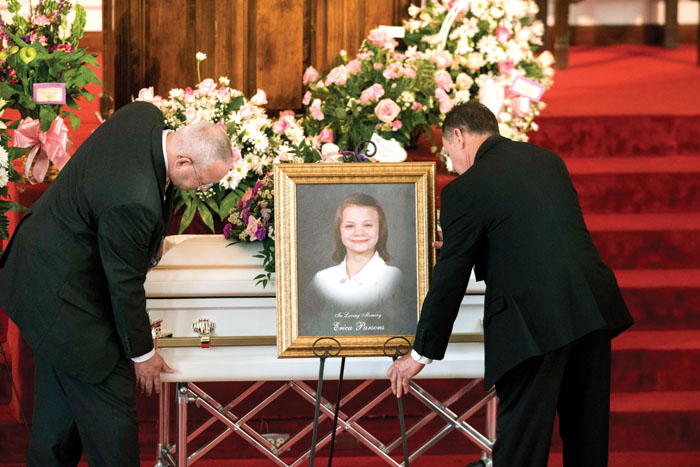 Brent Lyerly and Jeff Moore bring in Erica Parson's casket and set up a portrait before the community funeral for Erica Parsons in 2017. File photo

SALISBURY — Social workers in Rowan County investigated possible abuse of Erica Parsons when the girl was 4 and again when she was 6 and in 2004 placed her in the care of an aunt after substantiating neglect.

After that, according to a Department of Social Services statement released Monday, the agency did not receive another allegation about Erica until she was reported missing in 2013.

By then, Erica would have been 13, but she was dead.

Under North Carolina law, social services agencies can share information about a child the agency has investigated if someone is later charged in the child’s death.

A grand jury indicted Sandy and Casey Parsons on Feb. 20 on charges the couple abused and murdered Erica, their adoptive daughter, then dismembered her body and concealed her death.

Those charges stand in direct contrast to a 2002 conclusion made after a social worker and detective investigated Erica’s possible abuse and decided the report was unsubstantiated.

“Adoptions social worker expressed no concern about Casey and Sandy’s parenting or bonding,” according to the statement.

The first allegations came into Child Protective Services on March 12, 2002, when Erica was 4. Someone reported that her adoptive mother had beaten the girl, leaving marks on her buttocks, a leg and the side of her face.

“Child will not eat for mom and only weighs 23 pounds,” the person alleged, according to DSS. “Mom has her sit at table for two hours to try to get her to eat. Mom reports that child is adopted and mom does not love her.”

After the agency notified the Sheriff’s Office, a detective and a social worker immediately went to the Parsons home and interviewed all the children and both parents.

The parents agreed to a safety plan “to use alternate forms of discipline such as timeout and grounding,” the statement says. “Parents further agreed not to leave any marks or bruises from spanking and to provide safe stable home for children.”

The social worker interviewed Erica, who weighed 41 pounds — not 23, as alleged. She and the other children in the home denied any mistreatment and  had no bruises or marks other than a small scratch on Erica’s face, the statement says.

Casey and Sandy Parsons told the social worker that Erica had always been small and did not eat much, but she was provided Boost weight gain drinks.

Medical records showed she had been born prematurely, weighing 4 pounds, 7 ounces, had tubes in her ears because of ear infections, and experienced conductive hearing loss and developmental delays. She later got hearing aids.

The parents said an aunt wanted Erica, and the statement notes “discord among extended family members was evident.”

The detective closed the report as unfounded, the social worker closed it as unsubstantiated and “risk assessment rating was low.”

The second report came in on June 29, 2004, and concerned the family’s actions on a beach trip. The person making the report said Erica was on punishment, was not allowed to play at the arcade and said that she was going to throw up after eating a sandwich, according to the DSS statement. Her father allegedly yelled at her, and her mother said Erica would not be allowed to get up at night to eat.

“Child is very tiny and frail. Concern over mother not wanting the child and tried to give her away,” the statement says.

When a social worker visited the Parsons home within the required 24 hours, Sandy and Casey denied the allegations. They said relatives were mad that they didn’t allow Erica to stay at the beach with them. They admitted they did “holler” but did not use corporal punishment.

Erica, then 6, was clean and appropriately dressed, according to the statement. She told the social worker that she had timeouts or lost privileges when she got in trouble, but if she did something really bad she might get a whipping. Other children in the family reported the same thing. The social worker “observed Erica to present as well bonded with both parents.”

The others noted no more extreme punishment but “have heard parents telling child she is stupid,” the statement says.

In this instance, the decision was to substantiate neglect because medical and remedial care was not provided. (Erica had missed wellness exams and a follow-up appointment with specialists.)

Erica was placed with a maternal aunt in a neighboring family.

The social worker assessed that home, helped get Erica enrolled in schools and obtained a notarized statement from Casey Parsons allowing the aunt to seek medical care for the child, enroll her in school and receive her adoption assistance checks. “Neighboring county DSS continued working with aunt to obtain power of attorney for child and to pursue guardianship.”

However, according to court testimony, Casey Parsons took Erica back into her home after eight months and continued to receive the adoption assistance checks even after Erica died in December 2011. Casey and Sandy Parsons are in federal prison on fraud charges.

Social Services was required to check on Erica’s status by sending the family a letter each year. Donna Fayko, director of Rowan DSS, said the agency would only see the family face-to-face if the family requested more services or if someone reported the family to Child Protective Services.

“A check on the child’s condition is not required,” Fayko said. “Adoptive parents go through a comprehensive assessment prior to the adoption. They do not have histories of abuse or neglect.”