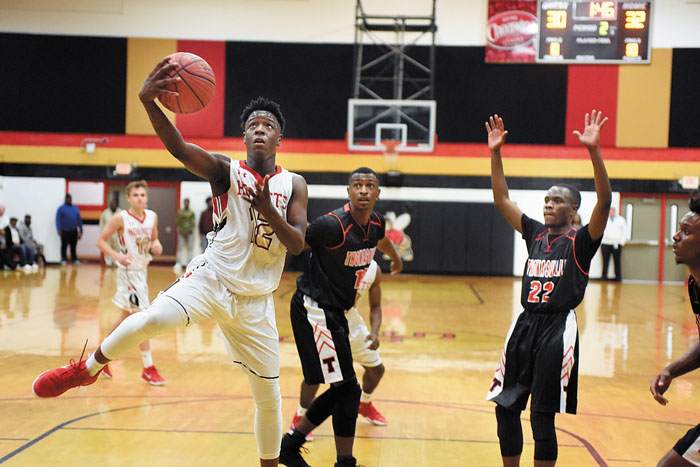 Wayne Hinshaw file photo/for the Salisbury Post ... Salisbury’s Elijah Moss (12), shown during an earlier game against Thomasville, scored 12 points Tuesday night at Mountain Heritage as the Hornets won 70-56, moving into the 2A West final on Saturday.

BURNSVILLE — There were some nerves early, but there was nothing but dominance after that.

Salisbury’s sprint through the 2A boys playoffs continued on Tuesday. The fourth-seeded Hornets (27-3) ended Mountain Heritage’s 22-game winning streak, blasting the top seed in front of a packed house in the Cougar Den, 70-56.

“We just couldn’t make any shots for a while, and our nerves had a lot to do with that,” winning coach Bryan Withers said. “But once we settled down, once we got going, we played really well.”

Withers saw it coming. He really did.

“What the tape of Mountain Heritage showed was that they wanted to play fast, really fast, so this was just a great matchup for us,” Withers said. “A fast pace is what we want, and I knew that if we played like we can defensively, we could  take them.”

Senior guard Trell Baker was the ringleader again for the Hornets, although he did most of his damage this time as a distributor. The cat-quick  buzz saw, who got 28 points on Saturday, logged 10 assists to go with his 12 points.

And on a night when the Hornets’ No. 2 and No. 3 scorers Bill Fisher and Oshaun Robinson combined for just eight points, a lot of the Hornets’ wild cards came through. Elijah Moss (12), Lonnie Rogers (12) and Cameron Gill (10) all exceeded their scoring averages by a lot. The streaky Moss couldn’t find the range in Saturday’s home win against Hendersonville, but he knocked down four game-changing 3-pointers against Mountain Heritage.

Salisbury also got eight points from Xavier Kesler. Ten different Hornets scored, which is not unusual. They’ve scored by committee all season.

Mountain Heritage (23-2) had a size advantage with 6-foot-9 sophomore Justus Shelton, and the Hornets, who had made a long trip west, came out cold and shaky. Mountain Heritage took a 7-0 lead. The home crowd, which had just witnessed a victory by the Mountain Heritage girls over Wilkes Central, was going crazy.

A 3-pointer by Baker took the pressure off and finally got the Hornets untracked.

“Then the game changed when we brought in our second five,” Withers said. “That second group picked us up, got us going, and then our starters came back in fresh and they were ready to really got after them. Everything started to flow. We took control of the game.”

Salisbury came back  to lead 11-10 after a quarter and had stretched that lead to 28-19 by halftime with blistering defensive heat.

“At halftime, I told the guys we were doing everything we wanted to do defensively,” Withers said. “We just had to make a few shots. If we could make shots, the game was ours.”

Moss made some big ones in the third quarter when Mountain Heritage tried to make a move. Then Rogers had a nice fourth quarter.

“I liked the way our big guys (that’s Rogers and Fisher) played tonight,” Withers said. “They were ready to play with great effort. We held their tall kid (Shelton) to six points.”

The officials had a let-them-play mentality and a loosely officiated game benefited the aggressive Hornets.

“Mountain Heritage got a few baskets at the end, but it felt like a 20-point win,” Withers said.

Hayden Branton, Brandon Aumiller and Callin Randolph scored 12 each for the Cougars.

“Our last two games, we’ve played two good teams, and they were both very young teams,” Withers said. “Hendersonville and Mountain Heritage will be tough next year.”

Forest Hills, the No. 2 seed in the bracket, is next for the Hornets. The Yellow Jackets (28-2) knocked out East Lincoln last night. Forest Hills beat Salisbury in an 81-79 thriller in the second round last season.

“It will be an exciting game,” Withers predicted. “Forest Hills is athletic and they can really shoot.”

Salisbury expects to find out today when and where it will take on Forest Hills in Saturday’s regional championship. The game will be played in Greensboro or Winston-Salem.

In the East, Greene Central and Clinton will be battling for the championship.