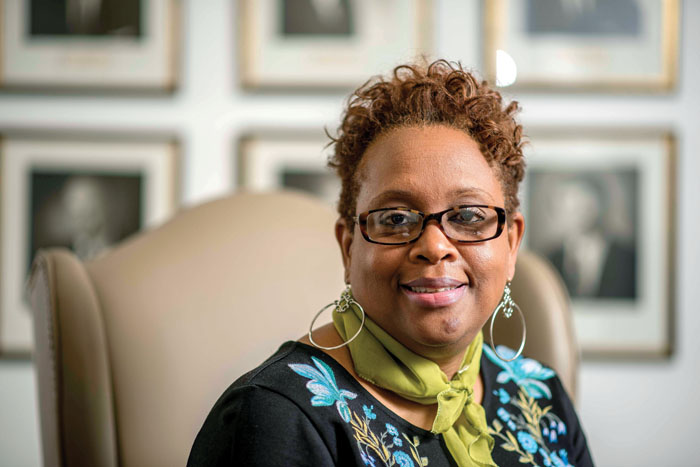 Diane Gilmore was appointed to the position of city clerk for Salisbury. She is become the first African-American in the history of the city to hold the position. Jon C. Lakey/Salisbury Post

SALISBURY — After 20 years in the city’s Finance Department, Diane Gilmore decided it was time for a career change. She primarily handled accounts payable and most recently was a finance specialist, but in September she was appointed city clerk.

“I am completely humbled and honored to be able to hold this position,” Gilmore said.

Gilmore, a native of Rowan County, is the first African-American woman to hold the job of Salisbury city clerk. She is in charge of city records, manages public records requests, and maintains codes and ordinances.

“The transition into this position has been challenging but equally rewarding,” Gilmore said.

She began her career with the city in customer service, where she worked for three years. She then transferred to accounts payable, working in the Finance Department for 13 years.

Two years ago, at the age of 50, Gilmore made the decision to finish something she’d started long ago — earning her bachelor’s degree. She had attended Catawba College but never graduated. Finishing was something that she always wanted to do. She now has a degree in business management and leadership from Pfeiffer University.

“I’m very proud of that accomplishment. I’ve always been a lifelong learner. I was inspired to obtain a college degree,” she said.

Gilmore said she needed a new door to open and is grateful for the opportunity.

Gilmore said she’s inspired by her daughters, Alyssa, 28, and Amber, 25, because they are always willing to serve and care for others. One of Gilmore’s daughters is an educator, and the other is in the social work field. Both daughters founded a mentoring group for young girls.

If she could sit down at dinner with someone central to black history, she’d pick media mogul Oprah Winfrey, whom she admires for opening a leadership academy for girls.

What makes Gilmore happy and motivates her is spending time with her husband, Kenneth, and children. She’s most at ease relaxing at Sunday dinner at home. Gilmore was influenced by her grandmother, Mable Phillips, and mother, Mary Gray, who she said helped shape her into the woman she is today.

“They taught me values, to love and to treat others with kindness,” Gilmore said.

Both women were hard workers, spiritually led and caregivers, which are aspects that shaped Gilmore’s relationship with God and how she parents and overcome challenges.

The values they taught her are the same that Gilmore has passed on to her daughters.

Her faith is the cornerstone of her life and what she owes her success to, Gilmore said.

She is a member of Henderson Grove Missionary Baptist Church and is married to her high school sweetheart.

Her favorite book is one that was read often to her daughters, “Amazing Grace,” about an African-American girl who wants to play Peter Pan in a school play. Her classmates tell her she can’t because she is black and not a boy. The girl’s grandmother reminds her that she can do anything she sets her mind to, Gilmore explained.

Gilmore said she has encouraged her girls that they, too, can be anything.

“Today, this is still one of my favorite books,” she said.