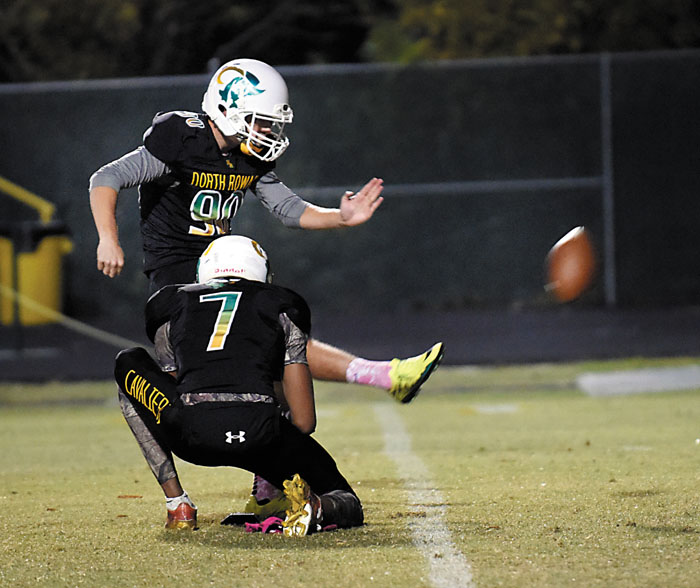 SPENCER — Every kicker has to start somewhere. For Catawba football signee Jacob Young, the first steps came in the seventh grade when the North Rowan Middle Mavericks held an audition.

The Mavericks planned to score plenty of touchdowns, but they were still searching for someone to kick off after those scores.

“When I was in seventh grade, they lined everyone on the team up and had us all try kicking off,” Young said. “That’s when I found out I had a strong leg. I won the job.”

Young had been a defensive end, but from that day forward, his contributions to North Rowan football would come via his right leg. He reached legendary status in Spencer by his junior year. At North’s Eagle Stadium on Friday nights, the P.A. man simply referred to Young by his Twitter handle — “The Kicker.”

When he was in the eighth grade, Young got an encouraging visit from Joe Nixon, who was the head coach at North Rowan High. Nixon told him to keep working, that he could kick, and that he had a bright future.

Ben Hampton, now North’s head football coach as well as AD, recalls Young coming to the school and inquiring about soccer practice prior to his freshman year. That was in the fall of 2014, Nixon’s last season as North head coach before he headed back to West Rowan.

“Well, I had to break the news to Jacob that we weren’t going to be able to field a soccer team,” Hampton said. “But I told him to come on out and help us in football.”

North already had two kicking specialists, seniors Dylan Auten and Brian Reyes, but Young joined them for a booting session on the field.

Young still expected to kick for the jayvees as a freshman. Prior to picture day, Nixon informed the varsity players to report to the field for photos at 10 a.m., with the jayvees scheduled for 11. Young arrived with a smile at 10:30, figuring he was 30 minutes early. Instead, he found out he was 30 minutes late. He’d made varsity.

“Funny story because that’s the day I became No. 90,” Young said. “Coach Nixon wanted to know where the heck I’d been. He threw that No. 90 jersey at me — I guess it was the only one they had left — and told me to get dressed as fast as I could.”

North found roles for all three kickers that season. Reyes kicked off. Auten punted. Young handled a lot of PATs for a powerful team as well as the occasional field goal attempt when someone stopped the Cavaliers. He kicked four PATs opening night against East Rowan. His first career field goal, from 35 yards out, was an important one, boosting a 14-13 third-quarter lead against Thomasville to 17-13.

“Then, from my sophomore year on, I did all of it as far as our kicking,” Young said. “Kickoffs, PATs, field goals and punts. I’ve always considered myself a kicker. Punting is something I had to learn on the job.”

There have been a lot of seasons at North in which kicking an extra point was a major adventure. Young changed that. His kicks became a serious weapon for the Cavaliers. In his career, he would account for 19 field goals and 127 PATs. He’s been the All-Rowan County kicker. He’s also been the all-county punter.

“Those guys don’t show up at North Rowan every day,” Hampton said. “He’s been a game-changer for our program. We’ve tried to make use of his talent by prioritizing our special teams. We’ve worked on those teams every day.”

While he’s been a proficient placekicker for years, Young has made amazing strides as a mostly self-taught punter. He’s watched a lot of film to learn proper techniques. He’s also gotten helpful instruction from former Salisbury High and Wingate University punter Philip Hilliard.

“He’s helped me with my punting more than anyone,” Young said. “And I tried to go to one camp every summer just to make sure I kept my mechanics right. I couldn’t spend thousands on camps, but I’d go to one.”

Young’s senior year was outstanding. It included a 71-yard punt and a 47-yard field goal. He put 40 of 60 kickoffs in the end zone for touchbacks.

While he just had some near misses on long field goals, he  had a phenomenal season punting. He didn’t have any off games. He averaged 48.0 on five punts against West Rowan and 51.0 on five punts vs. Lexington. Young averaged 46.7 yards  on 26 punts and broke the county record for a season set just two years ago by South Rowan’s Marshall Long, who played in the All-American Bowl.

Young was honored as the punter on the Associated Press All-State team, rare recognition for a player at a 1A school.

Recruiting picked up for him a bit after the All-State team was published. Fayetteville State and Chowan got involved at that point, competing with Catawba and Wingate.

It doesn’t make a ton of sense because so many college games come down to a field goal or a field-position changing punt, but colleges are generally reluctant to hand out scholarships to kickers and punters.

The only Division I interest for Young came from the Charlotte 49ers, and Charlotte wanted him as a preferred walk-on, not as a scholarship player.

“The goal was always to get some money for my education through kicking, and I’ll be receiving scholarship money from Catawba earlier than I would have anywhere else,” Young said. “I’ve always liked Catawba. It’s not only close to home, it’s a very good program. Coach (Curtis) Walker has built a strong foundation.”

Catawba’s Lee Brackman was All-South Atlantic Conference as a redshirt sophomore and has been excellent on kickoffs and placements. Punter Caleb Berry has a year of eligibility left and has been solid.

Young doesn’t mind competing, and it should be a win-win for Catawba. Young is good enough that he’ll either claim a job or push the incumbents to be even better.

“I know they have good players, but the door is open,” Young said. “The best guy will kick.”

Prep Basketball: Spree by Baker the difference for Hornets