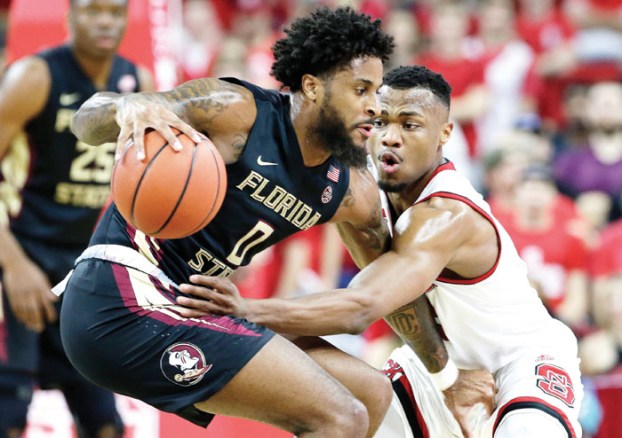 N.C. State shot at least 50 percent from the field for the fifth straight game, winning its fourth consecutive ACC regular season game in the same season for the first time since 2006.

“We’re just sharing the ball, getting to our spots, and everybody is shooting the shots that they’re good at and that they work at,” Dorn said. “Guys are just clicking right now, and it’s great to click at this time of the year.”

Omer Yurtseven scored 13 points and Markell Johnson had 12 for the Wolfpack, who led by as many as 28 points in the second half.

“They were so focused in the moment that I didn’t think they would ever miss,” Florida State coach Leonard Hamilton said. “And, really, some of them almost didn’t miss.”

Braian Angola scored 14 points and Christ Koumadje had 12 for the Seminoles, who were 0 for 15 from 3-point range.

Terance Mann scored all 10 of his points in the second half for Florida State.

“I thought our guys played a really good game from start to finish,” N.C. State coach Kevin Keatts said. “We did a tremendous job, especially in the first half, defensively.”

Florida State: The Seminoles are still on track to achieve a second straight NCAA Tournament berth, but they must play much better than they did against N.C. State. They need to beat either Clemson or Boston College next week to finish at .500 in league play and avoid carrying a losing streak into the ACC Tournament. “I thought today I saw our guys kind of panic a little bit when they got trapped,” Hamilton said. “The size of the moment, I thought, emotionally affected them.”

N.C. State: The Wolfpack took a big step toward solidifying their first NCAA Tournament berth since 2015. One year after slumping to a 15-17 record, they reached 20 wins overall and 10 conference wins in Keatts’ first season. “I couldn’t be more proud as a coach,” Keatts said.

Hunt, a graduate transfer from North Carolina A&T, made all four of his 3-point attempts for the second game in a row. He has shot 14 of 17 from 3-point range during N.C. State’s four-game winning streak, scoring 46 points in 71 minutes off the bench. The home crowd chanted his name during the second half.

“At first, I tried to ignore it, but you can’t,” Hunt said. “It was amazing. I’m dreaming. I’m really on cloud nine right now. It was an amazing feeling.”

The Seminoles were 0 for 7 on 3-pointers in the second half, but they barely missed from 2-point range after halftime. Florida State made 17 of its 20 shots from inside the arc, doing damage on a variety of drives to the basket.

“I think we’re playing better basketball because we’re passing the ball. I think we’re maturing, and I think we’re getting the right guys to take the shots and we’re not forcing shots.” — Keatts

Oodles of oohs and ughs in the Pyeongchang Games