Wardrobe from the movie ‘Titanic’ on display at Biltmore House 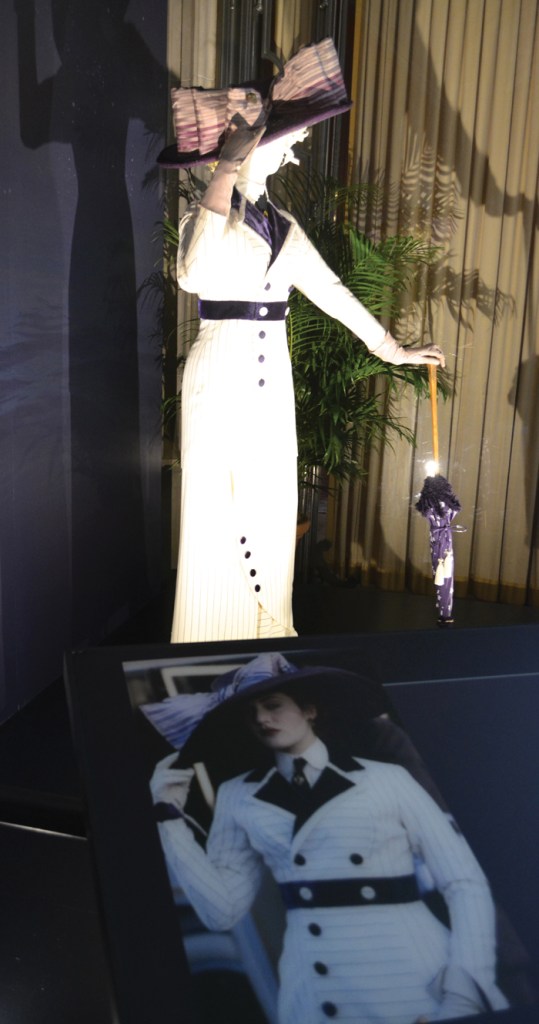 The iconic outfit worn by Kate Winslet in the opening scene of “Titanic” is the first outfit visitors see in the new “Glamour on Board” exhibition at Biltmore House, with more than 50 costumes from the 1997 movie.

“It was called the Ship of Dreams, and it was. It really was.” — Rose Dewitt Bukater

ASHEVILLE — The Ship of Dreams has arrived in Asheville, as fashions from the movie “Titanic” are on display at Biltmore House. The “Glamour on Board: Fashion from Titanic the Movie” exhibition opened Feb. 9 and runs through May 17.

Biltmore was the dream of George Washington Vanderbilt, and the first sight of the 175,000 square foot mansion never fails to impress as tour buses trundle down the driveway after navigating the 3-mile approach road.

In much the same way, the Titanic boasted previously unimagined grandeur before its maiden voyage in 1912. Ironically, George and Edith Vanderbilt and their young daughter and only child, Cornelia, were slated to sail on Titanic, but were homesick after a trip to Europe. At the last minute, they booked passage on the Olympia.

In many ways, the Vanderbilts’ lavish lifestyle mirrored that of the Titanic. Overall, the movie won 11 Academy Awards, a record for the time. That included the award for Best Costume Design, as evidenced in the more than 50 outfits on display for this one-time only tour.

Members of the estate’s museum services team worked with 20th Century Fox to bring the costumes east. And Biltmore House is the only place you can see the exhibit, says Mallory Flynn, Biltmore’s public relations coordinator.

The gorgeous clothing on display is similar to what the Vanderbilts wore. One plaque notes that upper-class couples changed clothes up to six times a day. The home is the perfect backdrop for the iconic outfits from “Titanic.”

The first outfit guests spy is the purple and cream dress topped off by an enormous purple hat worn by Rose as she gazes on Titanic for the very first time.

“Why can’t we wear hats like that?” one woman in the crowd asked.

In the Banquet Hall, custom mannequins depicting Rose and Jack are adorned with the attire they wore to dinner their first night aboard ship. The deep red furnishings of the library make the perfect backdrop for Rose’s red evening gown.

The library, with its deep red furnishings, makes a dazzling location to display the deep red dress Rose wore the night she tried to jump over the ship’s railing. The elaborate beading caused the dress to weigh 10 pounds, Flynn notes.

A mannequin in Mrs. Vanderbilt’s bedroom wears a dressing gown, and a plaque there notes that women of the time spent the mornings in dressing gowns, and the remainder of the day, well, dressing.

The dark blue wallpaper of the Claude Room is the location of Rose’s “flying dress” — the one she wore as she and Jack stood alone at the bow of the great ship. It complements the blue velvet and satin dress wonderfully.

In the Tyrolean Chimney Room — a bedroom so named because of an enormous floral overmantel — the diaphanous  silk dress Rose wore when the ship was sinking is on display. A plaque notes that some 24 versions of the dress were made to withstand the constant water in which the actors found themselves.

The Louis XV Room is one of the most sumptuous rooms in the entire house. It is here that Rose’s gold and black dressing gown — the gown she wore when Jack sketched her portrait — is on display. The gold of the gown matches the gold throughout the bedroom. As an appropriate accent in this over-the-top room, the mannequin also wears the “Heart of the Ocean” necklace — the piece of jewelry crafted for the movie which was modeled on the Hope Diamond. The ornate dressing gown worn by Rose, along with a replica of the “Heart of the Ocean” necklace.

The audio tour notes that this was the room where the Vanderbilts’ daughter, Cornelia, was born. In turn, she gave birth to her two sons in this room.

There are costumes in other parts of the house as well. Servants’ attire is displayed in the kitchen and servants’ quarters, and some of the costumes worn by a core group of 150 extras are on display in the third floor living hall.

The last set of outfits is found in the Billiard Room — a white gown for Rose and a simple shirt and pants for Jack, worn when they reunited at the end of the movie on the grand staircase. Interestingly, this gown is made exactly the same as Rose’s dinner dress, although in all-white. The exhibit’s final costumes feature outfits worn by Rose and Jack when they are reunited at the end of “Titanic.”

The details on all of the gowns, especially, make each display a delight. The actress Frances Fisher, who played Rose’s mother, was quoted on one plaque as saying that Deborah Lynn Scott, costume designer, “has done an incredible job because even the extras in the background are dressed to the nines. Every single woman has a corset on and nothing has been left to chance.”

The men aren’t forgotten, either. The clothes worn by “Titanic’s” male actors are also on display. Jack wears a variety of clothing — he is, after all, a passenger in steerage — but Cal Hockley, Rose’s fiancé, was always dressed to perfection. In one plaque, actor Billy Zane called the character he played not a fashion horse but rather a “fashion Clydesdale.”

Flynn notes that the movie’s 20th anniversary was in 2017, a perfect time to bring its clothing to the estate. For “Titanic” fanatics or lovers of fashion in general, the estate offers a premium guided tour of the exhibit at 10 a.m. and 3:30 p.m. each day. Those who enjoyed the “Downton Abbey” exhibit in Biltmore in 2015 should equally appreciate this exhibit.

In some ways, the design of house is similar to that of the doomed ocean liner. It has its own gymnasium, as did the Titanic, and the Vanderbilts had separate bedrooms connected by a sitting room, just as first-class passengers traveled.

The exhibit is a way to draw guests during the off-season, although opening weekend was pretty crowded.

“We are always looking for ways to further Biltmore’s story,” Flynn says.

But on winter weekdays, she adds, you can have the estate mostly to yourself, especially if you plan our visit later in the day. Allow about an hour and a half to tour the exhibit, although it could easily take twice that on busy days.

It was appropriate to open the exhibit close to Valentine’s Day, Flynn says, because George and Edith Vanderbilt’s relationship blossomed at sea. Six months after sailing on the SS St. Paul, the two were married in Paris, and continued their love of travel throughout their marriage.

The next exhibit begins on May 17, the day this exhibit ends: Chihuly at Biltmore features stunning, large-scale glass sculptures by Dale Chihuly in the estate’s gardens. The exhibit will also be open select evenings, a first for the gardens. The Chihuly exhibition runs through Oct. 7.

You can book your visit to “Glamour on Board” by visiting biltmore.com or calling 800-411-3812. Be aware that some days may require timed entry tickets.