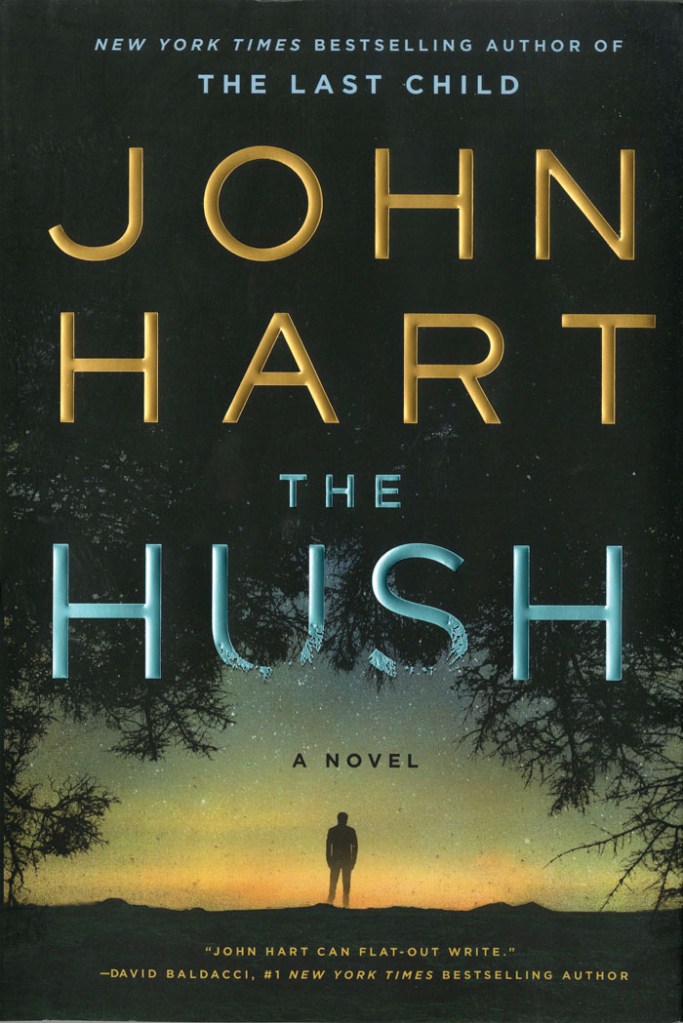 “The Hush” is very John Hart. His writing style is in full play, his ethos is here. Justice will be served, you can be sure of that.

And then, when you think you’re settling in for one of his thrillers, Hart surprises you. “The Hush” is thrilling, packed with action, and he builds tension well, setting up certain expectations.

The book is hard to leave. And it’s hard to stay as the action brings readers to places they haven’t been with Hart before.

Hart admits that’s a good thing and a bad thing. Fiction is about taking risks. “Safe fiction is boring fiction,” he says, and he’s correct.

Some of his loyal readers — one can imagine a tough guy who likes a heart-pounding thriller — will be surprised by this book, and maybe a little put off.

But some of the readers who felt assaulted by the violence of “Iron House” will pick this up and enjoy the ride.

And it is a wild ride, to be sure.

Many readers were excited to see more of Johnny Merrimon, the amazing character from “The Last Child.” Johnny is in his 20s now, and while life is not as frightening for him as it was, it’s not easy. Society is not easy. Johnny is still a loner who doesn’t like a lot of trappings and complications.

But … Johnny is true to himself, and Hart to his creation. Johnny is about honoring the past, his family, the ones who came before. And he’s fiercely protective of the land, his land, and the secrets and wonders it holds.

Hart is fierce about the land, too, and about where he’s from and what will be important in the future.

As Hart said years ago, Johnny Merrimon is the kind of child he would have liked to be.

In “The Hush,” Johnny is willing to fight to keep his 6,000 acres safe from development and hunters, in particular the ultra-rich William Boyd, who owns the adjoining the property. The hunt is what Boyd cherishes the most. It goes back to his grandfather, who took down an enormous buck inside Hush Arbor, which sits on Merrimon land.

It is an impossibly enormous buck, unlike anything any of Boyd’s rich, powerful friends have seen. He likes to lure his friends in by demanding an investment that will “allow” them the chance to hunt, albeit illegally, in the deep forests and swamps of Johnny’s property.

Johnny has already had a confrontation with him that lead to an assault charge — Johnny shot up Boyd’s hunting camp.

To complicate matters, Johnny owes a large tax bill and has no money. Advisers have told him to sell the land Boyd wants in order to pay.

Johnny’s answer is along the lines of “when hell freezes over.”

Along with Boyd’s push, there is a counter claim on the land by the Freemantle family, who argues Hush Arbor belongs to them. That’s the Freemantles as in Levi Freemantle, featured prominently in “the Last Child.”

Johnny’s boyhood friend Jack, is back, too, now a lawyer trying to establish himself. They have ties that will bind them together for life. Johnny needs help and Jack can’t say no, no matter how daunting or dangerous it can be.

And so the mystery deepens and spreads.

Hush Arbor is a village established by freed slaves before the Civil War. Those slaves belonged to Johnny’s ancestor, John. In Hush Arbor, the society is matriarchal, as they were in Africa, before their enslavement. We learn that one slave in particular, Aina, became the leader through methods that hark back to her tribe’s mythology.

Hart introduces new characters — Creola “Cree” Freemantle; an old, darkly powerful woman named Verdine; a wary but supportive bar owner named Leon; the dreadful Boyd and his cronies, and Leslie, a lawyer who will do anything to get what she wants.

It’s complicated, yes, and fantastic, mythological, magical, mystical, and here’s where Hart makes his leap from thriller to, well, even Hart can’t describe it in one word. He likes the term elemental,  going back to the most basic human experiences.

Hart was willing to take a risk to explore the deep magic of the place where Johnny lives, the place he inhabits. Hart inhabits Johnny’s mind. It’s a fascinating symbiosis.

Hart’s strengths as a writer are many, but it’s his passion for the setting of a story that is so appealing. And it’s his ability to not just get into a character’s head, but to let the character take him places Hart was not expecting.

He always describes his writing as hope and grope, and that came into play with this book, as with others. But he let himself go places he knew would be a surprise to his editors and readers. He loved it.

As he was writing the book, he said again and again how much he enjoyed it, and readers who have been following him will enjoy it, too, if they can open their minds to a new experience.

Hart creates a presence, a dark and threatening one, in the swamp that brings heaviness, fear, hopelessness, even death, yet the reader will have no idea what or who it is, or if it really exists for a long while.

The plot is dense, but not hard to follow; the action fits with the mythology of the place.

Read it in the darkness of night to enhance the experience. Stick with it, even if it seems strange, and follow through.

Know that Hart is already working on his next book, and it’s going to be completely different, too.

Wardrobe from the movie ‘Titanic’ on display at Biltmore…