My Turn, Timothy Dryman: Arming teachers not the answer 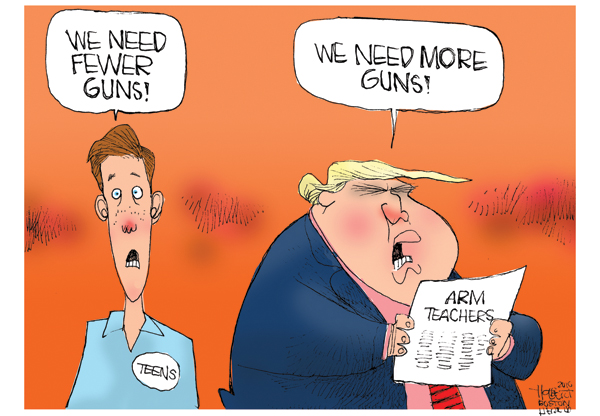 The debate goes on about what to do to prevent school shootings. The one idea that scares me the most is the arming of teachers. I implore legislators, school boards and other district leaders to not even consider this option.

As an educator and former infantryman with 20 years of professional weapons training and extensive training in close-quarter combat (fighting in buildings), I believe this is a really bad idea. Teachers are nurturers and caregivers. They were called to teaching because of the affection they have for children. Arming them would cause more harm than good. It would be counterproductive to what they are there to do. Teach!

I pose some questions as to show why this would be expensive and extremely time-consuming, not to say dangerous.

Many questions? There should be. You’re wanting to arm someone to protect children who has next to no formal tactical weapons training, and possibly lacks the capacity to be armed.

Where would the weapon be kept? On the teacher? In a locked box in the classroom? Teachers are not always in their classrooms or in the building.

How many staff are armed per building? Is it based on student body population? Campus size? Who will pay for the extensive, continuous training these teachers will have to endure? Who will conduct the training? It can only be conducted by someone with extensive close-combat training.

What would be the mission of the armed teachers? Are they to stay in place in their classroom, strategically placed throughout the building? Or are they expected to seek out the shooter and eliminate the threat? If it is the latter, they would need to know every turn, room and hallway in that building, becoming extremely familiar with the “terrain.”

Are they able to work as a team with the school resource officer (if assigned) and clear rooms and hallways? Will names of those who are armed be kept confidential? I’m sure parents will want disclosure on that.

Most importantly, when that teacher is finally face to face with the shooter, will they be able to pull the trigger? You don’t want someone who will hesitate and end up becoming an additional casualty or having the weapon taken from them. What about supplemental pay for “putting their lives on the line”?

What would the training look like to qualify? The Concealed Carry Course is sorely inadequate for a responsibility of this magnitude. We used to train to fight in buildings over and over again until we got it right, and then we still practiced. We conducted “ dry” walkthroughs, then with blank ammunition, then we ran the course with live ammunition, receiving After Action Reviews after every run.

Teachers would have to practice moving tactically throughout the building, encountering different scenarios. When to shoot, when not to shoot. They would have to train with live ammunition at firing ranges and SWAT-type training facilities. Thousands of live rounds.

They would have to experience how loud and chaotic it can be when a semi-automatic weapon is being shot indoors, train in that environment and make decisions in that environment. I can assure you it is deafening and extremely distracting. This training is ongoing.

Teachers already have too much to do and now you want them to learn military tactics and the use of deadly force in their “spare time”? Believe me — that’s what it will take.

Arming teachers is not the answer. Schools are supposed to be places where students can come to learn and grow. Sadly, some want to disrupt that process and cause terror and grief. Place more law enforcement in schools, but don’t arm teachers. Many of those law enforcement officers assigned to schools have developed amazing relationships with the students and staff they protect. Students identify weapons with law enforcement, but not weapons with teachers.

Let’s keep the weapons with the ones who are trained to use them. Teachers don’t need that added responsibility. They have enough as it is. Let teachers teach.

Timothy Dryman works with the North Carolina Department of Public Instruction and resides in China Grove.