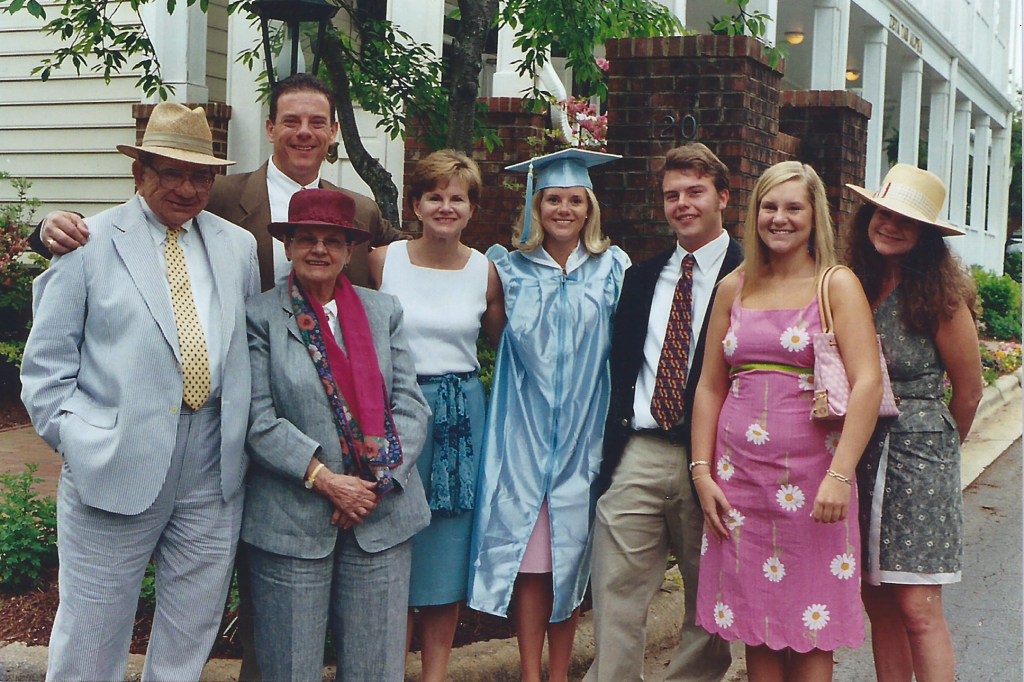 Dad Sonny Graves, far left, poses beside his son, wife and other family members in Chapel Hill in 2004. Photo by Ed Cook

Billy Graham said he was prepared for dying but not for growing old. My dad would have agreed with that.

An outdoorsman who spent as much time hunting and fishing as he could, Dad was caught off guard by the challenges of aging. By 85, breathing problems and an unsteady gait put the duck blind and the boat off limits. His world grew small.

Getting old is not for sissies, he said more than once.

But Dad had another saying that I’ve called up often since his death on Feb. 14. “Nobody has more fun than people.”

If Yogi Berra didn’t say that, he should have. It’s in league with, “When you see a fork in the road, take it.”

Dad’s saying came with a grin and a glint in the eye, often after he told a funny story. A nip of scotch might also be involved.

Thinking of Dad calls up many images. Topsiders and wrinkled shorts in summer. Camouflage and muddy boots during duck season. Tweed jackets for work, and ties with ducks or retrievers in the design — and the occasional food stain. My brother said Dad should put all his ties in a pot of hot water and make soup.

They goaded each other endlessly, as men often do.

I lost a beloved parent when Dad died, but my brother lost his best friend. When Worth was born nine years after me — the first boy after three girls — Dad finally had his boy, his hunting and fishing buddy.

There was a crowd-control element to raising us three girls. Mom and Dad took us on group outings to horse shows, epic trips to the beach. Dress shopping was an ordeal. And it took discipline and finesse to get three differently wired girls on the bus at the same time.

Worth was like a next generation, and his singular position in Mom and Dad’s lives has been very close. I sometimes envy that.

I got more than my share of spoiling, though.

You might say Dad is responsible for making me into a Tar Heel. An eighth-grade guidance counselor suggested I turn my writing skills toward journalism and said the best college for me was the University of North Carolina at Chapel Hill. This was in Virginia, mind you. When I applied to UNC my senior year, it was sight unseen. I landed on the waiting list.

Dad knew my heart was set. “We’ll get you into Chapel Hill,” he said, and got my high school guidance counselor to schedule an on-campus interview, despite her clear doubt about my out-of-state chances.

A solo trip with Dad was a rare treat. He drove me to Chapel Hill in the spring, when azaleas bloom and Frisbees fly. I had no trouble believing the “Southern Part of Heaven” bumper stickers. Seeing the campus’ green lawns and frolicking students made me want to go to UNC all the more.

The fact that we made the trip must have impressed someone. My acceptance letter finally arrived, and I followed my chosen path through J-school. After graduation, I married Ed, a native Tar Heel, and we made our home in Salisbury.

Dad said he wanted his out-of-state tuition back.

We have no regrets about settling in Salisbury, but I often wished we were closer to my family in Virginia. The miles and years put an inevitable distance between us. I cringe when I think of how often Dad answered the phone and I asked to speak to Mom, the better source for advice on being mother to three daughters.

Dad and Mom proved to be the best of grandparents to our girls, who have magical memories of running free on their farm and camping out with cousins in the basement.

Middle daughter Mary, a preschooler then, once led Mom and Dad on a chase after she came down with chicken pox and they tried to put salve on her skin. At least that’s the story they told.

Stories. We sat around Worth’s kitchen table after the funeral, a little too numb to share many of Dad’s stories. Even the wit in the family, daughter Ginny, couldn’t get a rise out of us. Dad had been fading for a long time but, as everyone says, you’re never ready.

We will gradually come out of this fog, I hope.

Where memory fails, photos can fill the gaps.

One photo shows an exuberant Dad with his brother, Lewis, and Worth, smiling with the day’s catch of dolphin and wahoo.

In another picture, a relieved Dad grins in a hammock at the end of my wedding reception, holding a champagne bottle.

A proud Dad shows up in many photos, holding a succession of grandbabies.

There’s Dad back in Chapel Hill 30 years after our first visit, posing with the family at daughter Emily’s graduation.

And, heart of my own heart, there are Mom and Dad smiling together for a long-ago church portrait, forever young with thick, dark hair and unlined faces.

Back then, Dad had a walk that said he was in charge and a snore that rattled boathouses. He was a lifelong Episcopalian but prone to falling asleep in the pew.

And for as long as he could during our visits back home, Dad would grill steaks, take his place at the head of the table and join us in savoring this time with family — time that was precious to him.

Nobody has more fun than people. And nobody makes dearer memories.

Elizabeth G. Cook is editor of the Salisbury Post.

Clyde, Time Was: Be thankful for work and people…