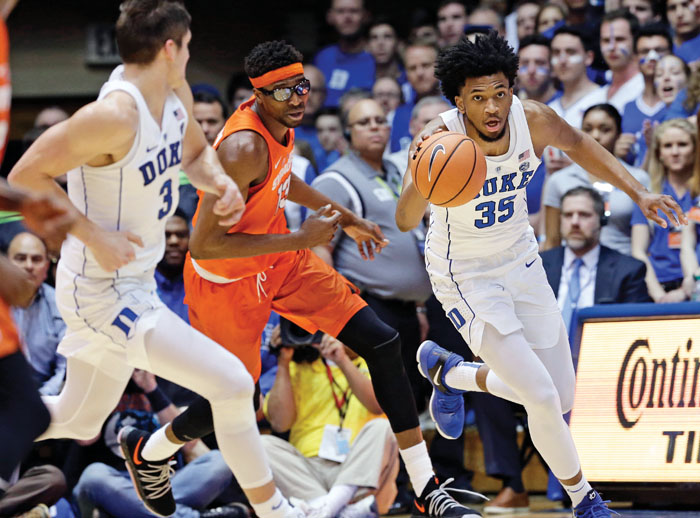 DURHAM (AP) — No. 5 Duke and Syracuse spent much of Saturday night confounding each other’s outside shooters with their zone defenses.

The key difference: The Blue Devils could pound the ball inside to Marvin Bagley III and Wendell Carter Jr.

Bagley had 19 points in his return from a sprained knee, Carter added 16 points and 10 rebounds and Duke beat Syracuse 60-44 for its fifth straight win.

“We just try to play off of each other,” Bagley said. “We’ve got this thing rolling now, and they’ve had it rolling for the last four games. We’re all back, and we’re ready to continue to finish out this season.”

Running a zone defense — a development that in the past might have been anathema to man-to-man disciple Mike Krzyzewski — the Blue Devils (24-5, 12-4 Atlantic Coast Conference) forced 17 turnovers and the Orange matched their season-low scoring total, set Feb. 3 in a loss to No. 1 Virginia.

Duke pulled away down the stretch after leaning hard on the two freshman big men in a game in which the guards on both teams struggled with their shots from the perimeter against their dueling zone defenses. The teams combined to miss their first 23 3-pointers.

“We didn’t let what we couldn’t do on the offensive end affect what we did on the defensive end,” Krzyzewski said.

Bagley, the ACC’s leading scorer (21.2 ppg) and rebounder (11.4 rpg), missed four games after injuring his right knee in a loss at North Carolina on Feb. 8.

Tyus Battle, who ranks third in the league with an average of 20.1 points per game, scored 12 while Frank Howard added 11 and Paschal Chukwu had 12 rebounds. The Orange (18-11, 7-9) lost their third in four games.

Syracuse: The Orange’s best chance to win this one was to gum up the works and hope for an off shooting night by the Blue Devils. For a while, it looked as though it just might work — Syracuse never fell behind by more than a dozen until the final seven minutes. The Orange’s scoring struggles of their own prevented them from earning a resume-building victory and will keep them as the very definition of a bubble team.

Duke: If nothing else, the Blue Devils proved they can scratch out a win. The nation’s third-most productive offense, which entered averaging 87.2 points, was held way below that, and the Blue Devils didn’t make a 3-pointer until Trevon Duval finally connected with about 7½ minutes to play. Of course, it helped to have Bagley back for the first time in two weeks.

The Blue Devils have held four straight opponents under 57 points. This was the second-fewest points allowed this season by Duke, which limited Evansville to 40 in December.

Just how dominant were Duke’s two big men? Bagley and Carter combined to score 14 of the Blue Devils’ 15 points during a 13-minute stretch of the first half. Bagley was the only Duke player to hit a field goal during a span of 9½ minutes. His dunk with about five seconds left in the half put Duke up 27-16 — its largest lead to that point.

Both teams were 0 for 10 from 3-point range at halftime, and Syracuse’s Oshae Brissett snapped the string of 23 straight misses by finally hitting one with about 15:15 to play. Duke missed its first 15 3s and its decades-long streak of consecutive games with a 3 was in jeopardy before Duval made one from above the top of the key. That extended the nation’s fourth-longest streak to 1,013 games.

Duke: Faces a quick turnaround with a trip to Virginia Tech on Monday night.

CLEMSON, S.C. (AP) — Clemson coach Brad Brownell drew up the first play of Saturday’s game to get an open 3-pointer for Gabe DeVoe, partly as a way to thank the senior for four good years.

It also served as a catalyst for the 15th-ranked Tigers as they ended a three-game losing streak.

Shelton Mitchell returned after missing two games for the Tigers, and his presence helped DeVoe get his stroke back. Mitchell added 14 points and took away some of the defensive pressure on DeVoe, who had shot 2 of 14 on 3s in the past two games.

“His speed in transition really opens up the offense a lot — allows me to get easy looks,” DeVoe said.

Georgia Tech missed 11 of its last 12 shots and turned the ball over four times in the final seven minutes to lose their seventh straight game and 11th of 12.

“We don’t have any margin for error to miss the layups we missed,” Georgia Tech coach Josh Pastner said. “It’s a recipe for disaster.”

Clemson led by as much as 10 early in the first half but allowed Georgia Tech to rally. The Yellow Jackets took a 58-47 lead with 10:28 left in the game.

“We were ready to play. We were sharp,” Brownell said. “But we also wanted it to be easy once we had that lead.”

DeVoe’s 25 matched the career high he set on Jan. 28 in a 72-70 win at Georgia Tech. His final basket Saturday came as he dribbled for about 20 seconds at half court as the clock went under a minute and then buried a 25-footer as the shot clock wound down.

Pastner described his team as snake-bitten twice after the game. He was talking about missed shots that rolled out, but also some calls that left three of his starters with four fouls for the final five minutes in a rotation that goes just seven deep because of injuries.

Okogie scored 22 points and hit his first eight shots, but missed his last four field goals in the final 17 minutes of the game as his fouls mounted.

Pastner wanted to look at video of the fouls. He thought the second foul on Okogie could have been a block and the third a jump ball. But the fourth on a DeVoe drive was the killer, the coach said.

“Whether he fouled him or not, he’s got to be smarter. I’d rather just let the guy score at that point. We need you in the game. You can’t even get yourself into a gray area,” Pastner said.

“I’ve got to really evaluate this the next couple of days. We’re not going to win as a tired team. Our guys have really put in a lot of effort,” Brownell said. “We just looked a little spent.”

Clemson: The Tigers are trying to hang onto something rare for them — a bye into the ACC quarterfinals by finishing in the top four in the standings. With the win, Clemson is guaranteed to be at least tied for fourth place with two games to go. In the 12 seasons since the ACC expanded beyond nine teams, Clemson has started the tournament in the quarterfinals just twice, in 2008 and 2011.

Georgia Tech: The Yellow Jackets are locked in to play the first day of the ACC tournament, meaning they will need to win five games in five days. Also, without a miraculous season-ending tournament run, the Yellow Jackets will have their eighth losing record in the past 13 seasons.