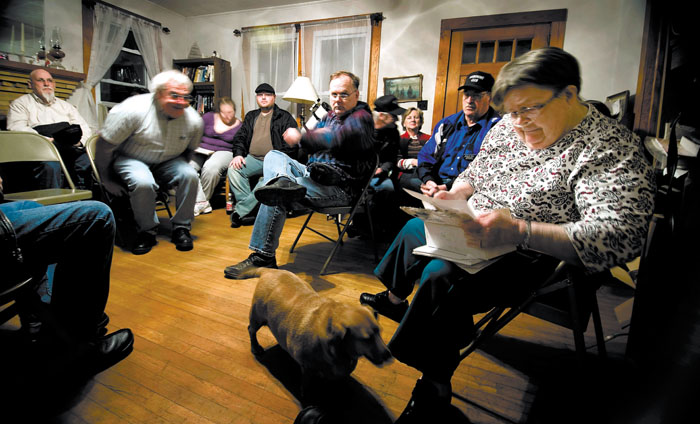 Jon C. Lakey / Salisbury Post file photo Alice Deal, right, runs the business meeting for members of the Astronomical Society of Rowan County that was held after a star party in January 2011. Several members brought their telescopes and powerful binoculars to look at the stars.

SALISBURY — The Astronomical Society of Rowan County marks its years by who the club’s president is at a given time.

Ellen Trexler was president of the club — founded in 1981 — for several years in the early 1990s. She also hosted the club’s star-gazing meetings at her house in Salisbury for more than a decade.

“(Alice) started coming in 1993 because of me,” said Alice’s brother and club Public Relations Officer Ralph Deal. “And then, in 2007, she became our president. We had her for 10 years.”

She served until 2017 — the year that Alice died unexpectedly in the home she shared with Ralph.

“The family wasn’t expecting it. Because she had fell the day before, right here,” Ralph said, gesturing at his living room. “But then the housekeeper got her up and put her in the recliner where Steve’s at and then she went to bed that night. I didn’t hear anything until the next morning.”

Ralph said that, at 4:45 a.m. the next morning, Alice told him she couldn’t breathe.

“And so I got hospice out here and the nurse went to get some extra medicine for her,” Ralph said. “And, before she got back, (Alice) passed away. Because at 6:35 she had gone.”

Ralph said Alice died of congestive heart failure, which he said is common on their mother’s side of the family.

“We all knew she wasn’t in good health, but we didn’t know it was that bad,” Barrier said. “And I don’t think Ralph knew it was.”

Ralph and Barrier were sitting with Romanek and the club’s program coordinator, Roger Overcash, in Ralph’s living room when they were interviewed. It is the room that the club has met in since 2005.

“The last time I saw her was about three weeks before she passed,” Romanek said.

“It was the last time we had a club meeting,” Ralph said.

Barrier and Overcash agreed that was also the last time they’d seen her.

“You know, I’ve known her for a long time,” Romanek said. “And she was sitting right here and when I walked by, you know, I said goodbye to her and she grabbed my hand and squeezed it. And she’d never done that before. I told Ralph about this. That’s why I think she knew she wasn’t going to see me again.”

“I had a feeling myself,” Roger said. “I don’t know if I was picking up on subconscious cues from her or anyone else or just intuition, psychic even, but I had a feeling of that, too, actually. A couple of times, briefly, that night.”

Ralph, who had lived in the house with Alice for 69 years, said he and their dog, Montgomery, still miss her.

Now, as club members continue to recover from losing Alice as a friend and a leader, Romanek remembers what a natural leader she was for the organization.

“Before she took over, I was even kind of in doubt as far as what’s going to happen to the club when Bill (Kiser) passed away,” Romanek said. “She took it and ran and was an absolute natural as president.”

Ralph said that, almost three months after Alice’s death, no one has emerged as the next natural leader of the group.

But Ralph and Overcash said the organization isn’t rushing to fill the position.

“I don’t think we’re in a real big hurry, as far as that. We don’t want to push it on somebody,” Overcash said. “But we do need to get one.”

The organization meets every second Saturday of the month at 7:30 p.m. at Ralph’s house, 1920 Deal Road.

All four members interviewed said the club is important to keep around.

“A lot of future astronomers are today these people who come into clubs like this and gets turned onto it from somebody else,” Overcash said.

“And also it provides a meeting place for all ages to which we can get together, we can explore the stars with our telescopes as well as keep up with what’s happening and the discoveries that are happening today,” Barrier said.