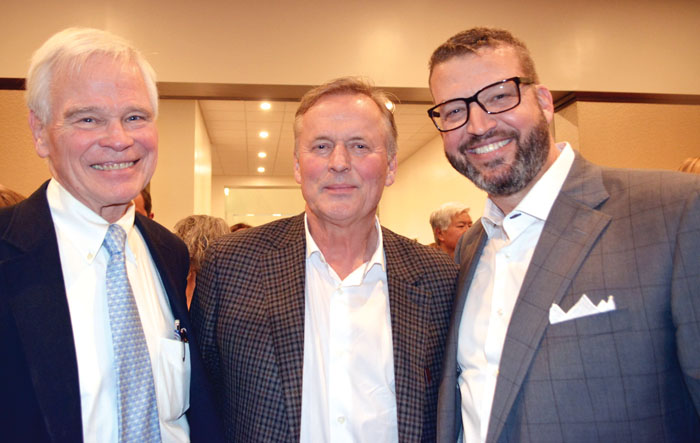 D.G. Martin, left, moderated ‘Thrillers! An Evening with John Grisham and John Hart’ in Raleigh. The event raised money for the N.C. Museum of Sciences and kicked off Hart’s book tour for ‘The Hush.’ Photo by Susan Shinn Turner, for the Salisbury Post.

RALEIGH — John Grisham and John Hart had just one piece of advice for D.G. Martin before their shared appearance: “Don’t get in our way.”

“I’m just gonna sit and watch,” Martin said Friday evening, as he prepared to moderate a conversation between the two friends and best-selling authors at Duke Energy Center’s Meymandi Hall.

“Thrillers! An Evening with John Grisham and John Hart,” had a two-fold purpose. It served as the launch for Hart’s sixth book, “The Hush.” It also served as a fundraiser for the N.C. Museum of Sciences, specifically its dinosaur education and outreach programs. Both authors donated their time for the evening. “Thrillers!” was the kick-off for Hart’s book tour, which runs through mid-April with a stop Thursday, March 1, at South Main Books in Salisbury from 6 to 8 p.m.

Martin, the host of the UNC-TV series “Bookwatch,” has interviewed Hart and Grisham separately.

“I know both of them well enough to know they don’t need a moderator,” Martin said. “I’ve got a lot of topics ready. They’re so good, and so smart, and they like each other. It should be easy.”

And so it was.

After Grisham and Hart, both wearing open-collared shirts, ribbed Martin, who was wearing a tie — “We’re writers,” Grisham said, “we can wear anything” — the three engaged in a wide-ranging conversation about writing.

Hart moved to Charlottesville about six years ago, he said, and sought out Grisham.

“John’s been my hero for a long time,” he said. “I thought, I wanna do what this guy does.”

Eventually, Grisham did suggest that he, Hart and two other local writers get together for lunch once a month to “talk books and drink wine.”

“It’s a lonesome business,” Hart admitted. “It’s just me and the dogs six days a week.”

“And I don’t have your charm,” he said to Grisham.

“No, you really don’t,” his friend replied.

Martin asked the two what they admired about one another.

“John has the greatest work ethic,” Hart said. “He gets up at the crack of dawn and gets his work done. I don’t know what I’m gonna write about.”

“John is an incredible storyteller with a vivid imagination,” Grisham said. “He’s fun to read.”

“I’ll take it,” Grisham said of the compliment.

After all, Hart noted, “Nobody wants to read about people in bucolic settings.”

Grisham said that he always started a new book on Jan. 1, with a goal of finishing by July 1.

“I do a lot of writing this time of year,” Grisham said.

“How many words did you write today?” Martin asked.

“I wrote 2,000 words from 6:30 to 10 this morning,” Grisham said, adding that he was working on a scene with final arguments before a jury. “That’s the stuff I love. Lawyers are appealing to the jury for the last time. The stakes are enormous. It’s crucial. I’m fascinated by the dynamics of how juries work. So it’s been a very productive day for me. I usually write between 1,000 and 1,500 words.”

Grisham and Hart differ vastly in their writing technique. When Martin asked Grisham how much of the book was already in his mind, his answer was, “All of it.”

“My rules are, don’t write the first scene until you write the last scene. If you know the final scene, you won’t get lost in your story. I outline. You don’t want to plot out everything, but you better know where you’re going. I know the final scene, which I’ll get to sometime in June. You build up to that. You hook your reader on the first or second page. The hard part is those 400 pages in the middle.”

Then it was Hart’s turn.

“I can promise you on New Year’s Day I’m not writing anything,” he said, adding that’s probably why Grisham has written 39 books and he hasn’t.

Hart said he concentrates more on his characters, what drives them, what baggage they have. He said that the main character must have a significant growth arc.

“The character has to evolve through their emotional troubles,” he says. “It’s about what drives us to do the things we do.”

Then, he added, “I come from the writing school of grope and hope.”

Grisham noted, “He’s the only member of that group.”

“I know where I want my characters to be but not how they will get there,” Hart said.

Good suspense, Grisham said, involves putting characters in dangerous situations and getting them out. “It’s all driven by story and plot.”

In “The Last Child,” Hart wrote an adult-themed thriller driven by children. In its sequel, Hart revisits the characters he loves so much, 10 years later. Hart warned the audience he likes to push the envelope, and steps over the line in the new book, into the supernatural, or magical realism. It’s also been called an “elemental thriller,” with ties to the land of the main character, John Merrimon, which stretch far into the past.

“Even if you break the rules, there are still rules,” Hart said. “If the logic gels at the end, then it’s OK. We create our own worlds. It would be a shame for me to spend the next 30 years writing and never take a chance. I wanted to try it.”

Hart’s love of the land is evident in this book. Indeed, the reason he moved to Charlottesville was because he wanted to own a farm not far from a city, and he wanted his two daughters to grow up with that same connection to the land.

Many of Hart’s North Carolina friends and family were on hand for the evening. His mother, Nancy, came from Salisbury with her friends, Mary Ellen Turner, Jayne Hubbard, and Kay Wilson, who is Hart’s mother-in-law. Hart’s sister, Mary, came from Asheville, and his stepbrother, John Stanback, came from Chapel Hill. His hunting buddies, Robert Ketner and Bob Brinson, came from Greensboro and High Point, respectively.

He greeted all of them at a sold-out, pre-show reception. Brinson and Ketner both raved about “The Hush.”

Asked whether such events intimidated him, Hart laughed. “I love it! Are you kidding? Now, if this were ‘King of Lies,’ I’d be overwhelmed. But I’ve learned to open myself up to the experience and embrace it. It’s been a pretty good run.”

Grisham also chatted easily with guests. When asked if he could be called a North Carolina writer, Grisham, who has a house in Chapel Hill said, “Well, Arkansas claims me and Mississippi claims me, so yes, sign me up.”

He went on to say that his roots were pretty deep in Raleigh as his wife was from here, and their daughter and her family live here now. His daughter and son-in-law have a 2-year-old son, and another baby is on the way. That means the Grisham grandparents will likely be here, too.