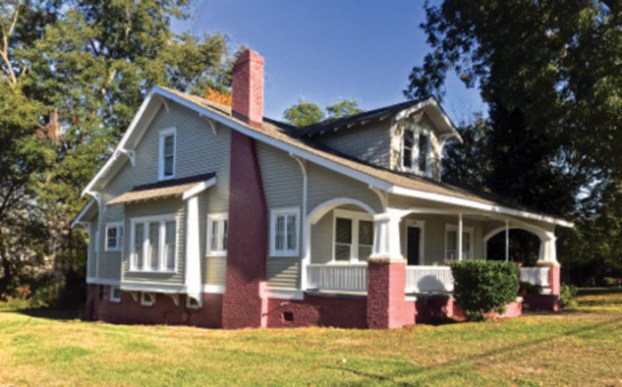 SALISBURY — A modest one-and-a-half-story bungalow, the Wallace-Hall House at 912 W. Monroe St. is the third of six houses covered by a restoration agreement between Livingstone College and Historic Salisbury Foundation.

The foundation repaired and painted the exterior and refurbished the windows after the bungalow’s reroofing. The college is scheduled to restore the interior and is grateful for the foundation’s assistance with other houses on a street once known as College Avenue.

The Wallace-Hall bungalow, a mail-order catalog house, was designed for Salisbury’s middle class during the early to mid-20th century. Its different forms were built across the United States between 1915 and 1920. The plan was purchased through Montgomery Ward Gordon-Van Tine Wardway.

As part of the Livingstone College Historic District, the house faces south toward a big growling Blue Bear in Livingstone’s Friendship Plaza.

The home is on land once owned by William H. Goler, Livingstone’s second president.

Students from Livingstone’s industrial department probably provided the labor to assemble it about 1917. Dr. William Henry Wallace, a local dentist, and his wife, Josephine, were its first occupants.

The structure rests on a subbasement foundation dug into a gentle slope. Front and rear gabled dormers sit atop a low-pitched, side-gabled roof with deep bracketed exposed rafters and a triple-panel dining room bay window.

The Wardway bungalow was probably shipped by rail as a package with pre-cut parts, hardware and assembly instructions. A noted characteristic of transported houses is their cluster within a mile-and-a-half of railroad freight yards.

Research is pending on whether the Wallace-Hall House was assembled from a catalog kit or built from blueprints. However, there are at least two other Salisbury bungalows bearing similar outside elevations. They feature front and rear dormers and an overhanging roof supported by two tapered piers on brick columns that shelter a broad and deep front porch.

One is near the North Main Street Historic District, and the other is across from Chestnut Hill Cemetery on South Main Street.

A pioneer of Salisbury’s African-American public high school education and his first wife were the home’s second occupants. They represented Salisbury’s middle class. Luicio Hamilton Hall, a native of Rowan County, and his wife, Bessie Corpening from Lenoir, purchased the residence in September 1926 from Goler.

Hall was born May 3, 1879. He was a son of Nathanial and Hannah Hall, who had a farm in Scotch-Irish Township, but he spent part of his early childhood in Cabarrus County. He came to Salisbury as a small boy and worked his way through high school and Livingstone College as a bellhop at the Empire Hotel and as a porter on the New York and Washington Pullman trains during his breaks from school.

L.H. Hall became principal of Salisbury Graded and High School, later known as Lincoln Elementary, in the Dixonville section of Salisbury. Bessie Hall was the head dietician and residence hall director at Livingstone College for 15 years.

Monroe Street School was placed on the National Register of Historic Places in 2004 and renamed Samuel Edward Duncan School. Duncan was the fifth president of Livingstone College and the brother of Elizabeth Duncan Koontz, President Richard Nixon’s appointee as director of the U.S. Department of Labor Women’s Bureau.

L.H. Hall served as principal at the second site of Price High School from 1932 until his retirement in 1947. He died in 1964 after the death of his second wife, Emma Beatrice Riggs, in 1957.

Hall and his first wife, Bessie, are buried in Oakdale/Union Hill Cemetery. Emma, who was a teacher and librarian at Price High School, is buried in Bethel Cemetery in Statesboro, Georgia.

Constructed in 1951, the gymnasium and shop building at 1400 W. Bank St. is named in honor of L.H. Hall. It was listed with the 1931 Price High School structure in the National Register of Historic Places in 2010.

The city of Salisbury uses these sites for a Head Start program and recreation.

Livingstone College acquired the Wallace-Hall property along with its household and kitchen furniture through the will of L.H. Hall as a memorial to his first wife.

The house was the home of faculty members from 1966 to 2004, according to the Salisbury City Directory. It was remodeled later and used for student housing until the college built a new dormitory and events center.

Reginald W. Brown is a retired educator and a member of the Historic Salisbury Foundation board of trustees.

For Billy Graham and North Carolina, the affection was mutual

By Jonathan Drew Associated Press MONTREAT — While the Rev. Billy Graham’s travels took him as far away as the... read more