Prep Basketball: Spree by Baker the difference for Hornets 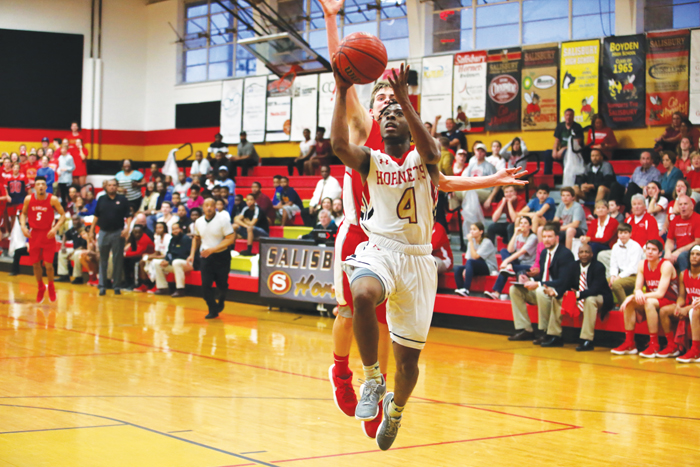 SALISBURY — Everyone knows the Salisbury boys’ basketball team is fast.

Salisbury nearly chased Hendersonville right out of the gym in a third-round 2A state playoff game, but then the Bearcats caught their second wind. Salisbury needed clutch free throws with 17.5 seconds left from Cameron Gill to secure an 85-78 victory.

“Video does not do justice to how fast Salisbury is,” Featherstone said. “They’re a lot faster in person than we expected, and they just got their hands on so many balls.”

The fastest of the SHS Hornets is mercurial senior guard Trell Baker, who entered the game with 977 career points. Baker missed quite a few opportunities around the rim in the first half. Coach Bryan Withers offered words of advice at halftime. Baker had 985 points at that point, and the Hornets were up, 40-31. Baker had ended the first half on a negative note, having the ball stolen for a breakaway two by freshman Carson Redden.

“I told Trell he was pressing, thinking about the 1,000 points,” Withers said. “I told him that the best way to get 1,000 was to win this ballgame. Win and we get to play again, and we knew he’d get there in the next one.”

Baker still needed 15 when he stepped on the floor for the second half. Withers would have been happy if he’d scored 10 in the second half. Instead, Baker turned in an unbelievable, 15-point quarter. He not only got to 1,000, he sharp-shooted the fourth-seeded Hornets (26-3) into a 19-point lead.

“He played angry in the third quarter,” Withers said with a knowing smile. “His intensity was way up, and I liked seeing that.”

Baker finished with 28 points and would’ve gotten 30-plus if he hadn’t missed a bunch of free throws at the end. He is the 12th player at the school to score 1,000 points, and that dates back to 1950s stars Eddie Kesler and Frank McRae. Withers is one of that dozen. He scores 1,210 for the Hornets.

“A guy that tall changes a lot of things,” Baker said. “You have to help defensively all night. You always have to get two people on him any time he catches it.”

Despite a long trip, fifth-seeded Hendersonville (20-7) brought a nice crowd and got off to a solid start. After a trading-baskets first quarter, Salisbury led, 21-20.

“But I liked the pace,” Withers said. “It was very fast, and that played into our hands. A key to the game was going to be making that 6-9 kid run hard all night. The plan was to tire him out.”

Salisbury started to achieve some separation in the second quarter. Gill brought the energy, scoring back-to-back buckets on hard drives as the Hornets pushed ahead by 10. On one of those buckets, he sailed right in over Beeker.

“I don’t think the long trip bothered us that much,” Featherstone said. “When the game started we were ready and we were playing well. But  then we got a little flat in the second quarter.”

Then Baker just went crazy in the third quarter.

Baker had driving buckets for the Hornets’ first three hoops of the second half. Late in the quarter, he rose and drilled a 3-pointer from in front of the Salisbury bench as he was fouled The 3-pointer that pushed him past 1,000 came moments later.

“It was all a blessing,” said Baker, as he clutched the 1,000-point gameball. “I went out there with the idea of letting things come to me — and it just came. I was open, so why not shoot? Shots were feeling good as soon as I let them go, especially the one for 1,000.”

Salisbury led, 67-49, after three quarters, and the Bearcats looked exhausted.

“Baker was phenomenal in that third quarter, and that turned out to be the difference in the game,” Featherstone said. “Every time they needed a play, he made one.”

Give the Bearcats an enormous amount of credit for the game tightening up in the fourth quarter. Salisbury struggled mightily at the foul line, and the Bearcats, especially Ensley, wouldn’t give up. Despite some strong play by Fisher, the Hornets’ huge lead slowly melted from 21 to 17 to 15 to 13 to 11. A 3-pointer by Ensley made it a nine-point game with 54 seconds left.

When Sawyer Moss scored on a reverse layup with 29 seconds left, The Hornets’ lead was down to 82-75, and Withers had to call a timeout to settle things down.

Kesler made a free throw the Hornets really needed, and then Gill made two with 17.5 seconds left to basically seal victory.

Salisbury did a lot of things right, although it didn’t shoot 3-pointers very well and was a dismal 18-for-36 at the foul line. That shaky foul shooting kept the door open a long time.

But the Bearcats also struggled at the foul line. They were only 22-for-41,

“I thought our guys really dug deep to make that last run at them in the fourth quarter,” Featherstone said. “But we had almost 20 turnovers and we missed so many free throws. Against a team as good as Salisbury, that makes it very difficult to win.”

Withers was thrilled for Baker — they’ve come a long way together — and he was also excited about the steady scoring of Kesler. The X-Man never seems to miss in the lane.

“It’s usually a bucket when he gets it,” Withers said. “He’s one of those kids who has a knack for scoring.”

Salisbury moves on to the fourth round on Tuesday. The Hornets will travel to the mountains to take on top-seeded Mountain Heritage.

“Our bigs didn’t play as well as they can and we can shoot free throws better,” Withers said. “But it’s another step for these guys. We’ve already gone two steps past last year.”