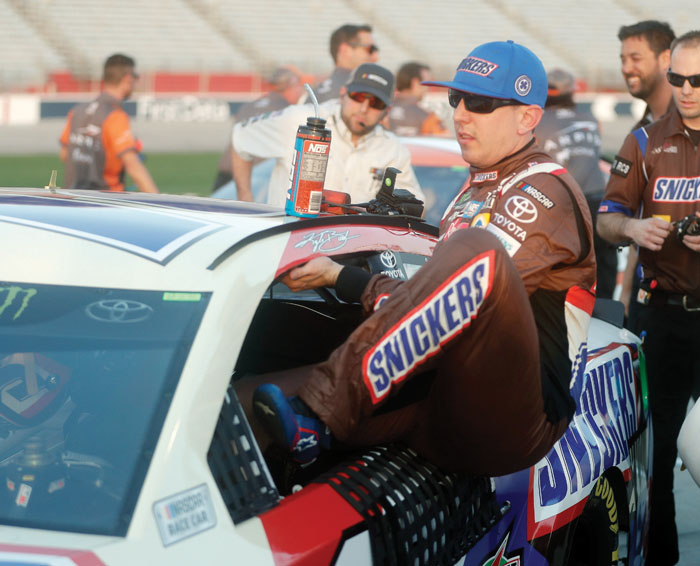 Busch will start in front Sunday in the second race of the NASCAR Monster Energy Cup season after edging Ryan Newman in a close battle.

Busch overcame handling problems in the first two rounds of qualifying to win the pole with a lap of 184.652 mph in the third round. Busch won his 28th career pole, and his first at Atlanta.

Wallace will start 19th, in the middle of the 36-car field. Much of the talk Friday remained on his second-place finish in last week’s Daytona 500 .

Wallace was the first black driver in the Daytona 500 field since 1969 . The second-place finish was the highest for a black driver and any rookie.

On Sunday, he’ll be the first black Cup racer in an Atlanta race since Bill Lester finished 38th in 2006.

Ryan Blaney, who will start 26th, revealed Friday that last week Dale Earnhardt Jr . was so worried about Wallace that he arranged for Blaney to provide counsel for the rookie.

“He was like ‘Hey, I need you to go call Bubba and calm him down because I think he was getting overwhelmed with all the media and the pressure that was kind of being thrown upon him and we haven’t even gotten started yet,’” Ryan Blaney said.

Blaney, who is friends with both Earnhardt and Wallace, said he encouraged Wallace to enjoy the “well-deserved opportunity.”

Defending NASCAR Cup champion Martin Truex will start 35th after his car did not pass inspection. As a penalty, car chief Blake Harris was suspended for the weekend and a 30-minute practice hold will be enforced on Saturday.

“This will be my first time in Atlanta in a Cup car,” he said. “I know how this place is in an Xfinity car and it’s not any fun, well it’s a lot of fun, don’t get me wrong, but hanging onto that thing is a challenge. I’m looking forward to it.”

“No, he don’t feel like he’s a rookie,” Petty said. “… I think he fell in really good with the guys who have been there for a long time because so far he hasn’t done anything really stupid. As long as we keep him straight, he’ll be OK.”

The strong showing at Daytona solidified the status of Wallace, 24, as a rising star in NASCAR.

Blaney and Wallace have been friends since the two 10-year-old boys raced Bandolero cars together.

Blaney said he believes Wallace “can have a huge impact” on the 43 Chevrolet and “grow it to places it hasn’t been in recent years.”

The only distraction for Wallace is a feud with Denny Hamlin. Wallace said Friday he has been excluded from Hamlin’s informal golf league, which includes a few other NASCAR drivers. Wallace added “I removed myself” from Hamlin’s basketball league.

The problems between the two began last week when Wallace objected to what Hamlin said was intended to be a joke when he claimed 70 percent of NASCAR drivers take the prescription drug Adderall to help with concentration.