Going for the gold — USA curlers 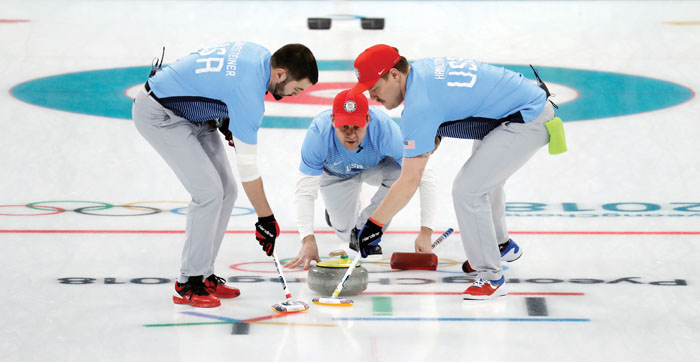 GANGNEUNG, South Korea (AP) — John Shuster was already a three-time Olympian and the most successful American curler in history when he applied for the U.S. high performance program after the Sochi Games.

He didn’t make the cut.

So Shuster approached a couple of the other spurned candidates about putting together a foursome of their own.

“He said, ‘Hey, let’s form our own Team of Rejects and see what we can do,’” U.S. second Matt Hamilton said.

And here is what they did: They won the U.S. championship, beating those selected instead of them, to force their way into the program that directs funding to teams with the best chance of success. They won a bronze medal at the worlds, another national title and then finished first in the U.S. Olympic trials to earn a spot at the Pyeongchang Games.

Now at the Olympics for the fourth time, Shuster clinched no worse than a silver medal with a second straight victory over Canada on Friday. The Americans — Shuster, Hamilton, Tyler George and John Landsteiner — will play Sweden on Saturday in the gold medal match.

“It’s a pretty good story,” Shuster said with a smile after beating the three-time defending champions in the semifinals. “This is just another step.”

A 35-year-old Minnesota native and now a father of two, Shuster was the 23-year-old lead, throwing the first two stones, for Pete Fenson’s team that won the bronze medal in 2006. It was the first — and, before Sunday — the only Olympic medal an American curling team has ever won.

But Shuster left that team to form a new one he would serve as skip, the player who makes the biggest strategic decisions and throws the last and most important stones. They won the gold medal at the World University Games on the same sheet of ice in Pinerolo, Italy, that hosted the Olympic bronze medal match.

Four years later, Shuster went back to the Olympics but played so badly that he had to bench himself.

“I missed four last shots to win three games early and essentially took us out of the competition,” he said.

After a year off from playing skip, Shuster was back calling shots the next year. They won the Olympic trials to earn a spot in Sochi; a second straight 2-7 record in pool play left them ninth in the 10-team field.

Fourteen men tried out for the high performance program designed to reverse the country’s Olympic disappointments. (The U.S. women finished last for the second time in a row). Ten men would be split into two, five-person teams (one alternate) and given money to train and compete in tournaments.

The foursome embraced the “Team of Rejects” label, using it as motivation and also basking in the underdog status that made them a crowd favorite.

After a year, they dropped it.

“They don’t call you ‘rejects’ any more after the three world championship appearances,” George said.

The team qualified for the Olympics — a second for Landsteiner and alternate Joe Polo, and a first for Hamilton and George.

The team lost four of its first six matches in pool play, leaving them one more defeat from elimination. Their next match was against Canada, a curling power that has never finished worse than second — or lost to the United States — in the Olympics.

That day, a story popped up on his Facebook timeline about Dan Jansen, the American speedskater who kept returning to the Olympics until he finally won a gold medal.

“His story is my story,” Shuster said. “I just decided that, 50 years from now, when my kids are showing my grandkids – and maybe I’m dead and gone – video from the Olympics, I didn’t want all my videos to be me failing.

“I’ve been enjoying every minute since then.”

JESSIE DIGGINS PICKED TO CARRY US FLAG AT OLYMPIC CLOSING

Diggins — who thrust herself across the finish line to give the Americans a dazzling gold medal in the cross-country team sprint — has been selected as the U.S. flagbearer for Sunday night’s closing ceremony at the Pyeongchang Games. She’s the first cross-country skier to carry the U.S. flag into an Olympic ceremony since Bill Koch did the honors at Albertville’s opening in 1992.

All U.S. Olympians in Pyeongchang were eligible to vote for the closing flagbearer.

“This is such an incredible honor for me,” Diggins said. “I’m really humbled and moved that the athletes voted for me. It’s so inspiring to feel the support and cheering from everyone. The coolest thing for me about the games has been getting to meet other athletes on Team USA, and getting to cheer them on at their events.”

and learn about what they do. I have so much respect and admiration for everybody here and am beyond honored to be able to lead us out of these games.”

It’s the first time women have been picked as U.S. flagbearers for both the opening and closing of an Olympics since 2004, when basketball’s Dawn Staley led the Americans into the Athens Games and soccer’s Mia Hamm carried the flag out. The last time U.S. women were picked for both roles at a Winter Games was in 1976, when skier Cynthia Nelson and speedskater Sheila Young were the selections.

And it seems fitting that U.S. women were tabbed twice in Pyeongchang.

The U.S. has 21 medals so far in and women have claimed 14 of them — 12 on their own, two others on mixed teams in figure skating. Many of the most spectacular moments by Americans in Pyeongchang came from women’s events, including the hockey team winning a shootout to finally beat Canada for gold and, of course, Diggins’ dive to victory.

“Jessie’s breakthrough performances here in Pyeongchang have been inspirational and historic, and her success is representative of years of teamwork and determination from all our athletes,” U.S. Olympic Committee CEO Scott Blackmun said. “I am proud that she has been recognized.”

Including the mixed wins, U.S. women have gold medals in seven events so far. There’s never been a Winter Games where American women reached the top of the medal podium more often; they got five in 1992, five more in 2002 and were golden in five events again in Sochi four years ago.

“I think everyone in the world knows there’s still room for growth for women in sports and women in business or all walks of life,” U.S. women’s hockey gold medalist Meghan Duggan said after her team topped Canada for the Olympic title. “We’re proud to be women.”