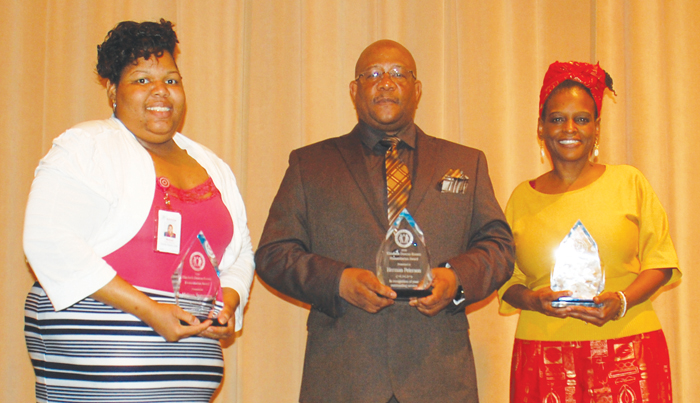 The evening attracted a large crowd, and entertainment was provided by students from Elizabeth Duncan Koontz Elementary School and the gospel choir at Catawba College.

Dora Virginia Wood, who was a godchild of Koontz, who died in 1989, headed the awards presentation part of the program.

Riley Costello, a 15-year-old high school sophomore from Warwick, Rhode Island, also was on hand to share the 10-minute documentary she produced on the life and career of Koontz. The documentary won a National History Day state award in Rhode Island.

Deedee Wright, a member of the awards committee, presented Costello with a special Elizabeth Duncan Koontz Award for Excellence in Educational Research.

Koontz was one of the people who re-established the Human Relations Council in 1985. During her life, she became a national figure in education, civil rights and women’s rights.

In 1968, Koontz served as the first black president of the National Education Association. Less than a year later, President Richard Nixon appointed her director of the U.S. Labor Department’s Women’s Bureau, making her the highest-ranking woman in his administration.

Cross, Peterson and Summers were nominated for the award by others.

Here’s part of what was said in introducing each recipient:

“Cross is active in the arts and community service in Salisbury. She is head of The Vine Event Planning, which she states ‘has consisted of creating spaces that were either nonexistent or marginalized.’

“A pharmacist, Cross was a liaison and coordinator for Living Books Documentary that told the stories of Shuford Memorial School alumni.

“In addition, Cross started the Peace Circle, a monthly community conversation that addresses social issues that affect the local community. ‘Collaborating with other community organizers to create a safe, nonjudgmental environment for people to speak their truth and actively listen to the truth of others has a positive ripple effect,’ said Cross.”

“Peterson currently serves as a senior Army ROTC instructor at West Rowan High School. He also is the owner and director of Kiddie Land Kindergarten, where he has mentored youths of all ages and many adults.

“A native of Spring Lake, Peterson is a graduate of Winston-Salem State University and served more than 20 years in the U.S. Army. He held positions at Fort Bragg, Walter Reed Medical Center and Fort Sam Houston Medical Academy.

“Some of his significant contributions are educating and being a role model for children at the kindergarten.

“As an instructor, he has been directly responsible for numerous cadets receiving scholarships, college admittance, entrance in the military and the workforce. His ROTC program has donated more than 30,000 hours of community service over the last decade.”

“Summers, a 2004 graduate of North Rowan High School, is president of the Thelma Smith Foundation, a nonprofit organization.

“In 2008, Summers’ aunt and her husband incorporated the Thelma Smith Foundation Inc. in Brooklyn, New York, named after Summers’ uncle’s mother, Thelma Greene Smith, who passed away in 2004.

“A year later, Summers’ aunt and uncle named her as the marketing and media executive for the Thelma Smith Foundation South Branch — an umbrella extension under the original (organization).