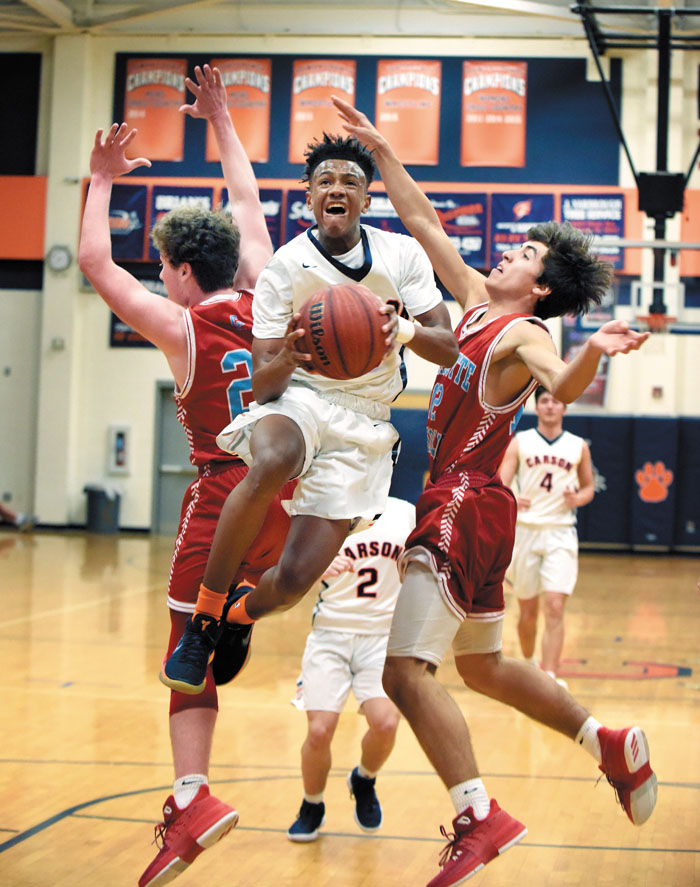 “Yeah, man. You only live once,” senior Jailen Williams crowed, just moments after Carson overcame another dose of 3A state playoff adversity and ended Catholic’s 17-game winning streak. “We keep giving our all every night, trying to survive and advance.”

Williams helped take the fourth-seeded Cougars (26-2) where no Carson team has gone — to the fourth round, where it jumps from one frying pan to another for a match at Cox Mill on Tuesday. He scored a game-high 21 points despite missing five free throws in the decisive fourth quarter. But on a night when 6-4 senior Jamarius Hairston was held to a season-low six points and fouled out with 4:58 remaining, teammate Owen White was as reliable as a Die Hard, netting 17 points and landing five of Carson’s eight 3-pointers.

“That No. 4, he’s got ice in his veins,” losing coach Mike King said after fifth-seeded Catholic (25-4) was beaten for the first time in 2018. “That kid is just calm, confident and expects to win.”

That’s what makes White so dangerous. Carson trailed, 42-41, entering the final period before the senior forward plugged in and hit a pair of 3-balls that turned the game. The first came with 6:16 to play, on a floating bomb that caught nothing-but-nylon and put the hosts up, 44-43. A minute later, White took a kick-out pass from Williams and banked in a 20-footer from the left side that made it 47-44.

“I guess Space Jams was looking out for me,” White said with a sideways glance — and a reference to the 1996 animated movie featuring Michael Jordan. “No, really, me and Jailen have that play down. I was excited when he called my number again. Probably too excited, because I banked it.”

Carson still led when Hairston was called for his fifth personal, dropping a pall of concern over coach Brian Perry on the Carson bench.

“We were concerned,” he said. “But these guys are so gritty. I don’t think any of them ever felt like they were underdogs. Cole Sifford jumped right in there and made what may have been the biggest bucket of the night for us.”

Perry is right. Sifford, an invaluable sixth man off the bench, made Carson’s last field goal of the game with three minutes to play. Cam Prugh advanced the ball along the right side and fed a bounce pass to Sifford near the left block, producing a back-door layup and a 49-46 edge.

“We really held our composure after (Hairston) went out,” White said. “This team, we don’t worry about who’s going to make the next shot or get the next stop on defense. We came together when he fouled out. It actually brought our team even closer together.”

Prugh knows why. “We’re old, but we’re battle-tested,” the steady veteran said. “There’s nothing anybody can throw at us that we haven’t seen. We’ve seen it all.”

They saw Catholic tie the score when Riley Berger got hacked by Cole Perry on the perimeter and converted three free throws with 2:30 left. Williams broke the tie with a pair from the stripe, then added two more to make it 53-49 with 51.6 seconds hanging on the clock. The Cougars sank eight of 10 free throws in the final 1:38.

“Somebody’s got to lose,” King said outside the subdued Catholic locker room. “These are the moments you’re never prepared for. When you win 17 in a row, you expect to win them all. There just isn’t another day — and that’s what hurts.”

There’s at least one more day for Carson.

“I don’t think any of us want it to be done,” Prugh said, as the swollen crowd thinned out. “We’re playing for our basketball lives. It’s such an honor to still be winning.”

NOTES: This was Catholic’s first loss to a public school this winter. … Carson’s history-making season now includes victories in its last 11 games and a 13-0 home record. It tries to slay another giant in Tuesday’s 7 p.m. game at Cox Mill, the state’s top-ranked 3A team. The Chargers (26-3) have won 15 straight, are also 13-0 at home and outscored Mount Tabor, 81-57, in the third round.