Cal Thomas: The Billy Graham I knew, and the grace of humility 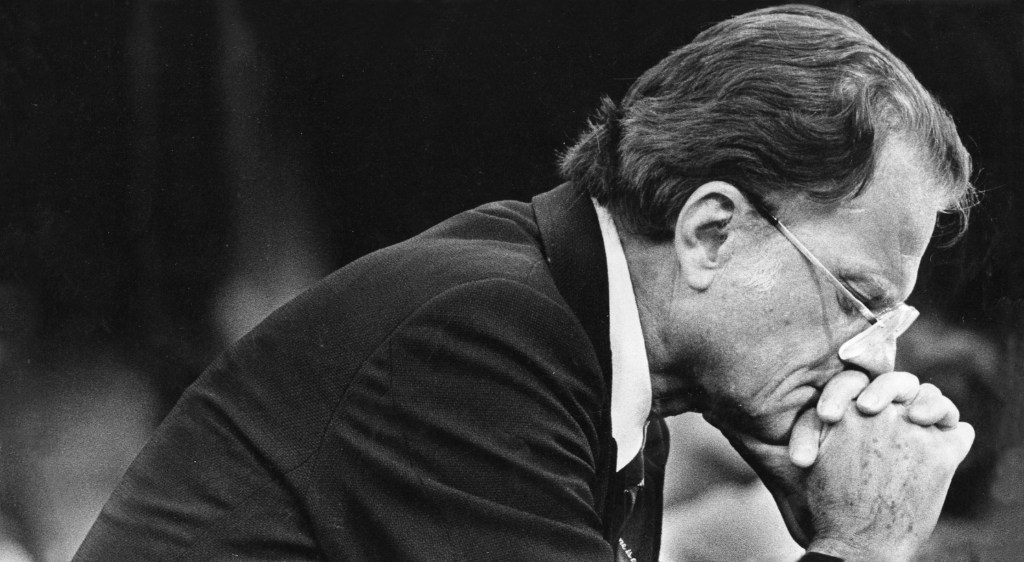 In my long career in journalism, I have met many famous people, but none of them impressed me as much as William Franklin “Billy” Graham. The reason had less to do with his fame and movie star looks; it was his humility that was so attractive, so refreshing, so like the One he faithfully served.

My conversations with him quickly turned to me. He wanted to know about my family, how I was doing. Politicians do this, too, but often it is a manipulative technique. With Graham, it was real. It is why so many loved him, including those who do not share his faith.

At his peak — which lasted longer than most — Graham was offered political power and movies. He turned them all down, believing he had been called to “preach the Gospel — Jesus — and do nothing else.”

He told me, and others, that his greatest regret was a too close association with some presidents — especially Richard Nixon — which dulled his senses to some of their excesses. Indeed, some politicians used Graham for moral cover while not necessarily sharing the depth of his faith.

Graham ended racially segregated seating at his Southern crusades long before it became “fashionable.” In the South especially this was a dangerous thing to do in the ’50s. He once told me of a conversation he had with Dr. Martin Luther King Jr. in which he quoted King as saying to him about desegregation and civil rights, “You take the stadiums and I’ll take the streets.”

In a 1979 interview I conducted with him for a book called “Public Persons and Private Lives: Intimate Interviews,” Graham told me that the accolades he had received shocked him because he did not feel worthy to preach. In others, this might seem like false humility, but not with Graham. I had observed him long enough to know that the light grace of humility rested easily on him.

Graham said he “felt everything (the Apostle) Paul felt” — inadequate, sinful and weak in the flesh. And then he said, “I’ve been asked ‘How do you feel when you stand up to preach?’ Usually I feel totally inadequate and wish that the floor would open up and let me drop through. There are many times when I stand up that I almost feel like running from the stadium. I feel like I have nothing to give these people. … And then I remember that it’s the power of the Word. It’s not me.”

And then the ultimate question, which he answered after turning 60: What does he think about when he thinks of death?

“I’d be delighted to go today,” he told me. “I look forward to death. In a way, I suppose it’s because I’ve studied a great deal in the Scriptures concerning Heaven. I believe it’s going to be something beyond anything that we could imagine. Death is going to be a wonderful experience. I hope they don’t dope me up. I want to experience death, because I think even the suffering is a part of life and that in suffering we gain spiritual strength.”

And, I ask, what will you say to the Christ whom you have served most of your life when you see Him?

“I know I’m going to fall down before him and say, ‘Lord, forgive me,’ I think that’s what I’ll say.”

I suspect Jesus will say two things in response: “I already have” and “Well done, thou good and faithful servant.”