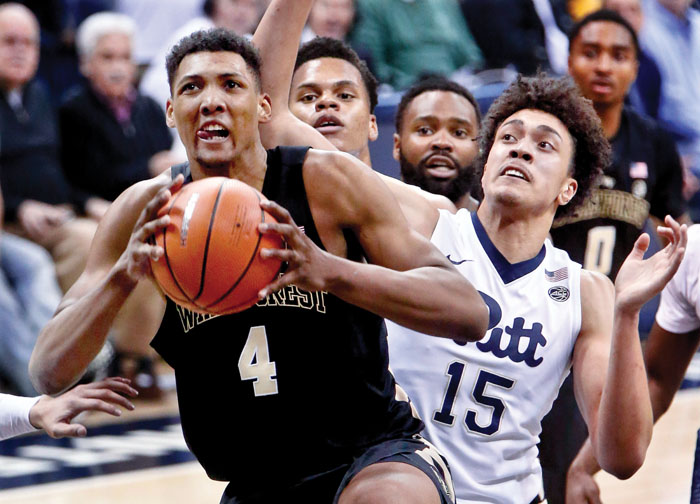 AP Photo/Keith Srakocic ... Wake Forest’s Doral Moore (4) shoots after getting around Pittsburgh’s Kene Chukwuka (15), during the second half of Wednesday night’s game in Pittsburgh. Wake Forest won, 63-57. The Deacs host Notre Dame today at 3:00 and No. 5 Dukes is at home tonight (6:15) against Syracuse.

GAME OF THE WEEKEND: Louisville at Virginia Tech. The Cardinals and Hokies enter the next-to-last weekend of the ACC’s regular season trying to overtake No. 15 Clemson in the standings and earn one of the top-four seeds and two-round byes in the conference tournament. Louisville (18-10, 8-7) — which earlier this week learned it must vacate 123 victories and its 2013 national title after an NCAA appeals panel upheld sanctions from a sex scandal case — is coming off a blowout loss to No. 5 Duke while Virginia Tech (20-8, 9-6) knocked off the Tigers to pull even with them and with N.C. State with three league games remaining.

LOOKING AHEAD: All eyes are on Clemson in that fourth spot in the standings — at least, for now. A three-game losing streak has made the Tigers’ position tenuous, and they face another test from a nationally ranked opponent when they host a rematch with No. 25 Florida State on Wednesday night. Clemson’s current slide started with the Seminoles knocking off the Tigers in overtime on Feb. 14 .

PLAYER TO WATCH: Doral Moore has been a bright spot in a rough year for Wake Forest, which needed him to step up after John Collins left for the NBA following a sophomore season that ended in the NCAA Tournament. Moore entered Wednesday night’s game at Pittsburgh leading the ACC and ranking second nationally with a shooting percentage of .706. He’s on pace to break the league record of .697 set by North Carolina’s Brendan Haywood in 2000.

ON THE WOMEN’S SIDE: With No. 4 Louisville and No. 5 Notre Dame having sewn up the top two seeds in next week’s league tournament, the focus shifts to the race for the other two top-four seeds and the two-round byes that accompany them. No. 9 Florida State and No. 23 N.C. State each brought 10-4 ACC records into Thursday night’s games, with No. 20 Duke and Miami at 10-5 entering their regular-season finales.

Jared Terrell had 17 points to help the Rams (22-5, 15-1) win for the 19th time in 20 games. It was their third straight after their school-record 16-game winning streak was halted by St. Bonaventure last Friday night.

In 1980-81, the Rams tied Duquesne for a share of the conference title, their only other regular-season A-10 championship.

When the game ended, blue and white confetti — the school colors — and streamers fell from the ceiling. Terrell climbed the scorer’s table, waving to the crowd.

Coach Dan Hurley said to the crowd over a microphone: “Let’s bring down this net baby, what do you say?”

In the opening half, the Flyers shot 58.3 percent and led most of the way despite nearly hitting their per-game average with 13 turnovers before URI closed by scoring nine of the final 11 points to take a 36-34 edge into intermission.