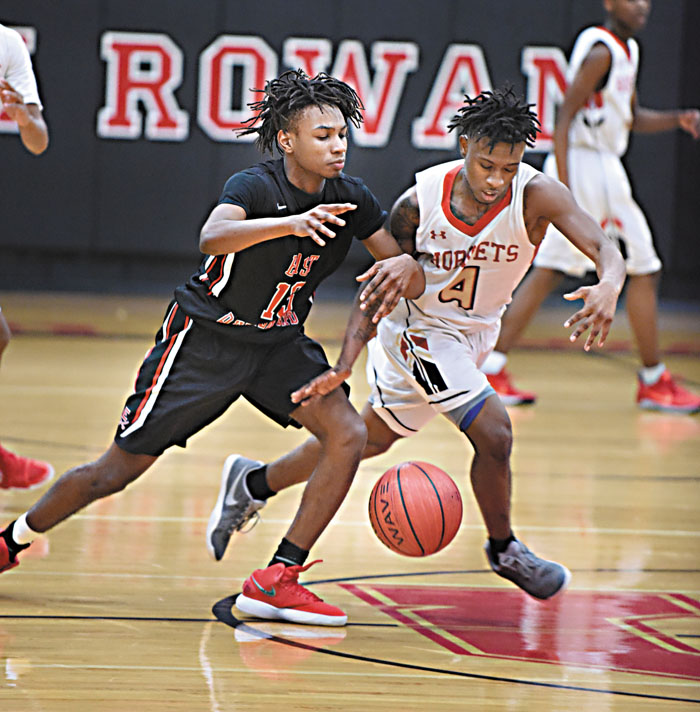 LANDIS — In was an unintended neutral court contest Thursday night in the second round of the boys’ 2A state tournament, but the Salisbury Hornets felt right at home.

The Hornets unleashed their offense in impressive fashion to overwhelm “visiting” East Rutherford, 96-60, placing six players in double figures in the process. The home playoff contest for Salisbury was staged at South Rowan’s gym due to a lockdown issue at its school during the day on Thursday.

It didn’t seem to matter.

“We played some of our best ball of the season tonight,” said Salisbury head coach Bryan Withers. “Our defense is always there, but we are not usually that effective on offense. That was our pace right there. That is the way we like it.”

In a game played at high speed from beginning to end, Salisbury (25-3) racked up 29 points in the second quarter, then closed the contest with a 31-point effort in the fourth period.

“I think we just came out with a whole bunch of energy and we just believed in each other,” stated senior guard Trell Baker, who led the offensive onslaught with 25 points. “The competition is going to get a lot tougher from here on out, but we are preparing every day and we’ll be fine.”

East Rutherford (19-10), out of Forest City and the Southwestern 2A Conference, battled the Hornets toe-to-toe into the second quarter, but then it all fell apart for them. Baker canned three long bombs and scored 14 points in the second quarter to turn a 19-19 tie into a 47-31 halftime lead.

“They were just a step quicker than us in everything we tried to do tonight,” said veteran Cavaliers head Coach Brad “Bull” Levine. “We could never stop them in transition on the other end. So kudos to them is all I can say. I look forward to seeing them down the road for at least a couple of more games. They are that good.”

Salisbury came out in the second half and blitzed to a a 20-point margin before the Cavaliers made a run to trim the margin to 12, late in the third quarter. East Rutherford’s versatile forward Josh Searcy (6-5) led the surge on a night when he scored 28 points, including five 3-pointers, and grabbed 10 rebounds.

But the Hornets responded with 10 straight points, six by Cam Gill, to surge back ahead 71-49 with 5:59 left to play. It was academic from there. Salisbury closed it out on a 16-2 run to flirt with an 100-point night.

“We were in a mindset to be aggressive, execute and get it done,” said junior forward Jahbreel Russell, who finished with 13 points. “We came into this game to do all the little things right and make it all come together.”

Salisbury was equally impressive on the boards, despite playing against a taller East Rutherford front line. The Hornets dominated the rebounds, 43-24, led by Oshaun Robinson with nine and Gill with seven.

“That was one of the best rebounding games we have had all year,” said Baker, who grabbed five of his own. “When we rebound like that, play defense and push it, we will be all right.”

Following Baker and Russell in the balanced scoring were Robinson with 11, and 10 each from Bill Fisher, Xavier Kesler and Gill. Cameron Hampton was the only other Cavalier in double figures with 10 points while Christian Walker chipped in nine.

NOTES — Salisbury, seeded 4th in the West 2A will host No. 5 Hendersonville (20-6) Saturday evening in the third round. … The Bearcats got past Pisgah High Thursday night 59-50. … Salisbury athletic director Dale Snyder said that Saturday’s game will be back at the Hornets’ gym. “And we’d like to send a huge thank you to South Rowan, for helping us out Thursday night,” said Snyder. … East Rutherford coach Levine is familiar with the Hornets, having won against Salisbury in 2011 on his way to winning the state 2A title. He and West Rowan coach Mike Gurley were coaches together for the East-West All-Star game the following year.