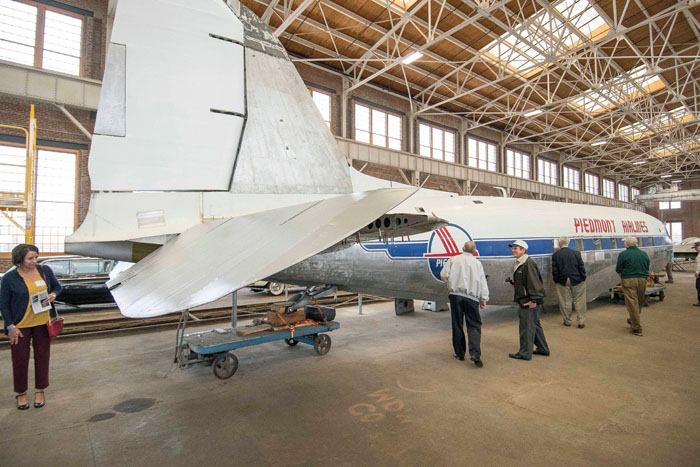 SPENCER — Former employees of Piedmont Airlines gathered Tuesday at the N.C. Transportation Museum to celebrate the 70th anniversary of the airline.

“Piedmont Airlines is a great part of North Carolina history and a story that needs to be told,” said Kelly Alexander, executive director of the museum.

Piedmont was a North Carolina-born airline that was based in Winston-Salem. On Feb. 20, 1948, Piedmont Airlines’ first flight departed from Wilmington, and the company’s journey to be “a model of how good an airline can be” began.

The museum has a Piedmont Airlines exhibit, and a restoration of a Piedmont DC-3 plane is underway. However, the celebration was not about expanding the exhibit or asking for donations for the restoration project.

“When we were planning the event, we didn’t want it to be another fundraiser for the DC-3; rather, this is meant to be a celebration of Piedmont Airlines and its history,” said Roy Johnson, executive vice president of the Transportation Museum Foundation.

The celebration kicked off with a luncheon for former employees and their families. As a surprise, the “Piedmont Punch,” a canned drink offered to passengers on Piedmont flights, was re-created.

During the meal, former employees reminisced about the airline and its management.

“I loved it because if you were ever hired at Piedmont, then you didn’t leave until you retired. It was that kind of company,” said Don Collins, a 35-year employee.

Ed Currie, a former special service agent for the airline, wore his uniform to the celebration. On the left side of his coat, a 10-year pin was proudly displayed.

“If USAir didn’t buy us, I’d still be there without a doubt,” said Currie.

At the end of the meal, the nearly 300 people in attendance raised a glass of Piedmont Punch to toast the legacy of the airline.

In addition to the luncheon, the celebration featured multiple speakers who discussed the history of Piedmont Airlines and the progress of the DC-3 restoration.

Leonard Martin, retired executive vice president of Piedmont Airlines, gave a brief history of the company from its beginnings through the expansion with West Coast flights.

Bob Reed, curator for the Piedmont Aviation Historical Society and former staff vice president of stations for Piedmont, depicted the early days of the DC-3 restoration.

“It was a lot of fun and a lot of people enjoyed it, which shows the kindness and dedication of Piedmont Airline workers,” said Reed.

Bill Wilkerson, a retired captain of Piedmont Airlines and current vice president of aviation for the Transportation Museum Foundation, discussed efforts to restore the DC-3 plane. He emphasized how the project is not only for the museum but for former pilots, as well.

“Every repair is being done as if it was going to fly because we want you pilots to be able to really enjoy the craftsmanship,” said Wilkerson.

The former employees said they enjoyed the lunch and speaker presentations but agreed that the best part of the day was reconnecting with old friends.

“It brought tears to my eyes because I didn’t think I’d ever get to see these people again,” said Currie.