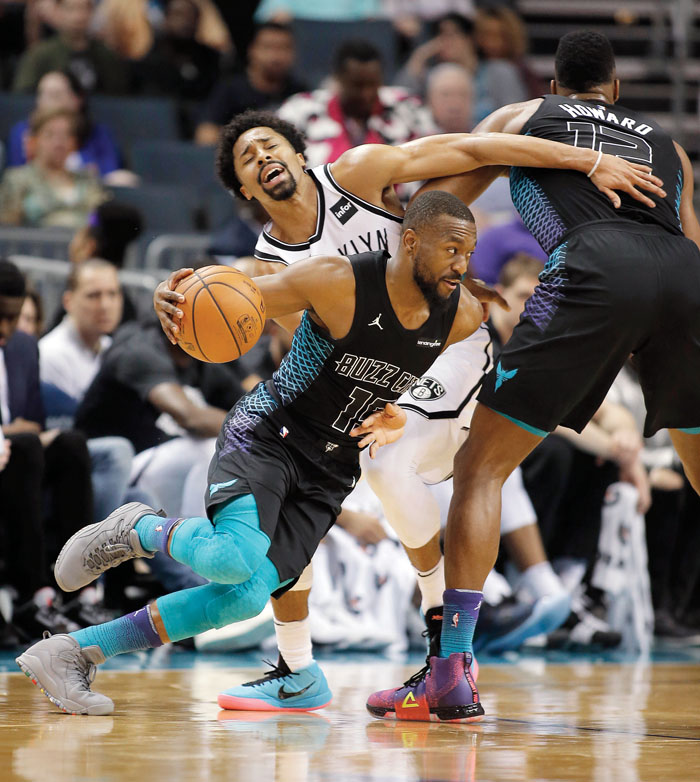 Charlotte Hornets' Kemba Walker (15) gets by a grimacing Brooklyn Nets' Spencer Dinwiddie, who was caught in a screen by Hornets' Dwight Howard (12) during the first half of an NBA basketball game in Charlotte, N.C., Thursday, Feb. 22, 2018. (AP Photo/Bob Leverone)

By JODIE VALADE, Associated Press
CHARLOTTE (AP) — Dwight Howard said he was tired. He called his legs “noodly” and “wobbly.”
“My legs and mind wasn’t on the same page,” the Charlotte center explained. “Next time, I’ve got to make sure they’re on the same page so I can get more rebounds for the team and we can get a good win.”
Even with his exhaustion, Howard dominated the interior Thursday night, grabbing a season-high 24 rebounds while adding 15 points as his Hornets topped the Brooklyn Nets 111-96.
Kemba Walker led Charlotte with 31 points on 12-of-22 shooting as the Hornets improved to 25-33 with their second straight win. All five Charlotte starters scored in double digits and the Hornets hit 52.4 percent from 3-point range.
Dante Cunningham had 22 points and 12 rebounds for the Nets, who lost their eighth straight game and fell to 19-41.
D’Angelo Russell, starting for the first time since November knee surgery, scored 19 points on 7-of-16 shooting.
Howard set the tone from the start, with 10 points and 11 rebounds after just 10 minutes of play in the first quarter in leading the Hornets to a 32-28 edge.
“That first quarter really hurt us,” Nets coach Kenny Atkinson said. “It wasn’t going as well with Dwight Howard in there, but we all have to help him (center Jarrett Allen) and do a better job; that is a load and a half.”
Hornets coach Steve Clifford, who was an assistant in Orlando when Howard began his NBA career there, said he is surprised the 32-year-old who has had both knee and back surgery still is capable of nearing his career high in rebounds (26).
“You’re talking about a guy that’s had major knee surgery and major back surgery,” Clifford said. “You’d never know it.”
It is what his Hornets teammates have come to expect from Howard, who recorded his 37th double-double.
“That’s what he does, man,” Walker said. “That’s what he does. He gets every rebound, he dominates the paint. It showed in his numbers. Twenty-four? That’s unbelievable, man. We’re going to need that from him every night if we want to make a push. We’re going to need that Dwight Howard to be there every night for us.”
Even with Howard’s early dominance, both teams were playing their first game since the All-Star break and had to shake off the accompanying rust that resulted in roller-coaster play. The Hornets held a 55-53 halftime lead after hitting 46 percent behind the arc. Charlotte then had a 13-0 run to start the third quarter, sparked by seven points from Michael Kidd-Gilchrist.
And the Hornets still needed Walker’s big fourth quarter, when he had 14 points on 5-for-6 shooting, to secure the victory.
The Hornets outscored the Nets 31-22 in the fourth, and Howard managed to tack on just two more rebounds to his total in that final quarter.
“I was tired,” Howard said with a sigh afterward. “I was tired. I should’ve got more.”
TIP-INS
Nets: Have yet to win in February. Their last win came Jan. 31 against Philadelphia. … Russell started for the first time since Nov. 11. The guard had arthroscopic surgery to “remove loose bodies” in his knee. Russell returned to the lineup Jan. 19, but has been playing in a reserve role. … Allen Crabbe’s second 3-pointer was his 140th of the season, moving him into sole possession of seventh place in Nets’ single-season history.
Hornets: Howard had his fifth game of 20 or more rebounds this season, one shy of the most by a player in Charlotte franchise history. … Charlotte has just 10 home games remaining this season. … This marked the first game the Hornets played since general manager Rich Cho was fired last week. Assistant general manager Buzz Peterson has assumed the position in an interim role.
STATUS: HOPEFUL
Atkinson said he’s “hopeful” that both Rondae Hollis-Jefferson and Caris LeVert will be able to return to the lineup for Monday’s game against Chicago. Hollis-Jefferson has missed the last 10 games with a right groin strain, and LeVert has missed the last four games — the first for a concussion, the last three for a right knee sprain.
“I know that’s not an NBA official term — hopeful — but I’m going to stay with hopeful,” Atkinson said. “They both worked out pretty hard again (Thursday) morning, but we’ll see how they look (Friday).”
FINDING RHYTHM
The All-Star break has both positives and negatives, according to Clifford.
“When guys get into a rhythm of playing 3-4 times a week, even though they’re fatigued, they’re in a rhythm,” Clifford said. “The break is great for everybody, it’s a reset. You get refreshed. And then the first game or two, it’s a little bit more like early in the season where they’ve got to get back into rhythm, feel comfortable again.”
UP NEXT
Nets: Host Chicago on Monday.
Hornets: Visit Washington on Friday.