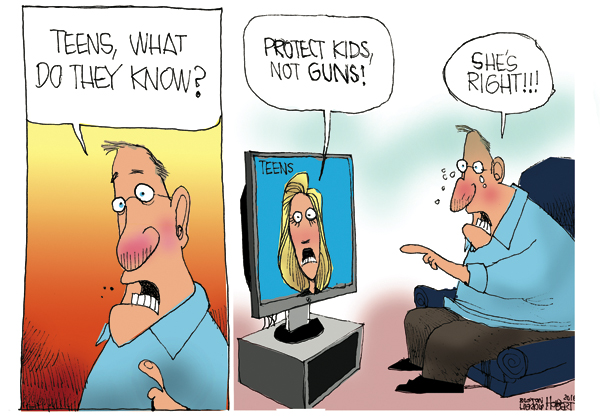 If you are looking for ways to help, you can start by supporting the schools that are trying to meet the needs of the students.

I would go further to say that training could be provided for the community to help achieve better awareness in the community. That will need community support, organization and, again, funding.

I feel for these children, and hate how they’ve been hurt in life. I also feel for my granddaughter, who has been their punching bag. The things that have been said to her have almost broken her spirit. She hasn’t had the easiest life, either, but she’s kind to others. These kids need help and counseling, too.

… Craig Pierce: ‘I don’t have confidence with the current board today …’

Pierce has the potential to unseat an incumbent. If he wins, he would resign his 2016 seat and the board would appoint a Republican replacement. Then the board could reappoint whoever lost. Would that not just be a kick in the pants?

Rowan County is smarter than that and will not allow Craig back in. If Craig was a  real man, he would give his seat up now and then run.

… Letter: Getting a grip on reality

I am happy that we have a good economy at this time, but I don’t believe it’s due to Trump’s efforts, nor that it’s sustainable or advantageous to all Americans with the current folks in power.

Trump and Republicans are no longer deficit hawks. The tax cuts they are giving to the wealthiest Americans will create insurmountable debt in the near future and will negatively affect middle class Americans in a myriad of ways.

… My Turn, Bruce LaRue: On diversity

Great analogies — different does not necessarily mean harmony. There is no inherent advantage to an emphasis on diversity without the same on a unity of purpose.

Only from a perspective of privilege can a person refuse to see the thoughts, feelings and cultures of others. Bruce LaRue, you are not the standard default model human being by which all others are to be judged and measured.

Conversations around the pros and cons of a college education often pit college against trade schools.

In the past, and I think now as well, a class distinction has been imposed on these two models of advanced education. It’s unfortunate that thinking of the two in such a limited way has been perpetuated.

When I was coming up, the pressure for young men was to become a doctor or a lawyer — never a carpenter or even an accountant or shop owner. Then we moved into the tech era and everyone was pressured into IT. Great money, endless potential. But alas, as we all know, even computer geniuses need a plumber when they need a plumber.

Now, we find ourselves with an entire generation that barely knows how to change a lightbulb and industries desperate to fill stable, well-paying jobs.

So, I want to give the trades a positive nod, and encouragement to any student who wishes to follow that path but may be reacting to the old, outdated view of skills training for future careers. The skills you will learn while studying for a trade certification are yours for life.

… Letter: NRA and our senators

Prayers for the families so soon robbed of their precious young people.

Schools are gun-free zones. Somebody forgot to tell the law-breaker. Just one armed resource (police) officer in each school would make potential shooters think twice before breaking the law. Murder, by the way is still illegal.

Nobody can predict when or where a suicidal individual is going to go off. So many suicidal people are going to do what they want. All the armies and laws will not stop someone willing to kill themselves just to harm others.

Who has deeper pockets? The NRA funded by strong, patriotic member donations or the pharma companies feeding on the week and innocent? The NRA funding argument is a joke in comparison. We are two wings of the same bird, and as long as we wish to destroy the other, this bird will come crashing down.

We do not have the right to bear arms so that we can go hunting for whatever game we wish to hunt. Our forefathers put the Second Amendment in the Bill of Rights in case a tyrant decided to try and destroy our Constitution and way of life.

In case you are wondering what tyranny looks like, look no further than Washington, D.C., and our corrupt politicians. Trump needs to drain the swamp.

President Trump undid a regulation last year that prevented people with mental illness from purchasing and owning a gun. I am sure this assailant’s diagnosis of autism would have prevented him from buying a gun.

What good will it do to make more laws when they didn’t enforce the laws already on the books that would have stopped this animal from getting a gun?

Who are the NRA, exactly? Well, they have a membership of five million plus. At $40 per year, that’s $200 million in simple membership dues alone.

The NRA isn’t just a small group of people sitting in a darkened room. Its a whole lot of people.

… Success can be measured by bail bondsmen applying for unemployment benefits.

Focus less on changing perception and combating narratives and more on getting results. Results will prove the naysayers wrong.

Many of us see the positive aspects of living and working in Rowan County.

We are fortunate to have a regional medical center, major employers such as Food Lion and Freightliner, a full legal community, a downtown restaurant/entertainment district, and yet we are blessed to live in small towns away from the congestion of the big city. …

I applaud our local leaders for the work they continue to put into our town and its future. Don’t focus on the naysayers. We must keep moving forward.

I love Cheerwine and bring it back to New York with me when I drive to Salisbury to visit my family. I have friends who attended Livingstone College who also ask me to bring them some.

Always stock up on Cheerwine when I’m in Rowan County and bring enough back to Ohio to last me until I visit again. It’s unfortunate it isn’t for sale north of Virginia.

This festival will be on the day of my wedding, literally right in front of my venue at the Rowan Museum. I’m so excited. If you see a bride holding a glass of Cheerwine, that would be me.

Fibrant has been in my home since 2011 and I am pleased with its high symmetric broadband speeds. It’s reliable, well worth the price and will not be traded for anything else.

One of the major issues overlooked in the Fibrant debate is its intention to be a public municipal utility, not a business. The primary objective of a business is to make profits for a closed group of shareholders. The main purpose of a public utility is to provide a non-profit service for a community controlled by its voting citizens.

We’ve had Fibrant since the beginning, and couldn’t be happier. The few issues that arise have been handled cheerfully, quickly and locally.

Ensuring all our students have access to internet will not only help in the short run, but throughout their lives, as they’ll be prepared for the wired and connected world they’ll inherit.

I have enjoyed good, competitive internet service from Fibrant at the office for over three years. Any occasional problems have been resolved by a really responsive customer service department, as well as field technicians.

Fibrant is boxed into a technology dead end. Like most of the projects the city undertakes, it was done in a half-baked manner without enough industry expertise to help make the go/no-go investment decision, and it needs to be axed. Smallsbury can’t compete in the communications/technology marketplace against billion dollar companies who will always offer cheaper, faster, better services for much less.

Charles Showfety, Fibrant was designed like a normal GPON system with a later upgrade to NG-PON2 with Calix gear. All of the core routers are upgrade Cisco units and do their job well. …

When I was there the network admins always had their finger on the pulse of utilization and we always upgraded bandwidth based upon a monthly trending graph. There no other smoking guns to report, but if it was marketed better and ran without interference like other large providers do it would be out of the red and paying back loans by now.

Fibrant is engineered to provide up to 10 gig to businesses and anyone else in the city. It has top-notch Cisco equipment that any provider would envy.

It is using a mere 7 percent of its capability in its core router. I have engineered fiber networks worldwide and ensured that Fibrant was also engineered in the highest level possible.