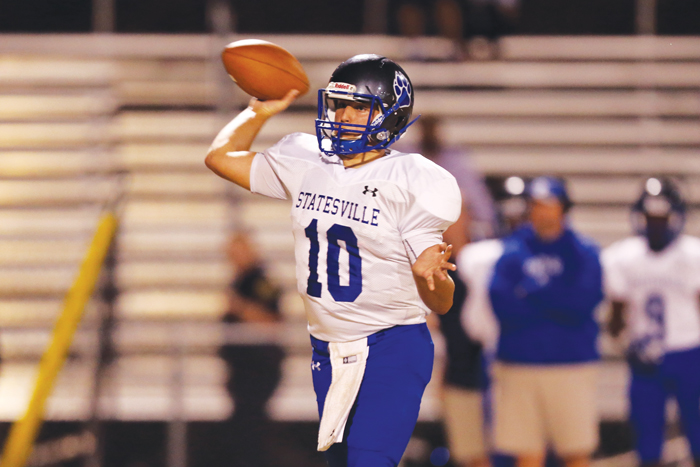 James Sipes file photo/for the Salisbury Post ... Bryant Young, of Statesville, is shown during a game against West Rowan last Nov. 3. The son of the late Scott Young, West’s former coach, Bryant has decided to continue his education and football career at Wingate University.

Getting to a signing day has been Young’s No.1 goal for a long time. He achieved that.

“It was emotional, just thinking about this day, thinking about signing in this room where I watched so many great West Rowan players sign when  I was growing up,” Young said.

Young, the ultimate West Rowan kid, actually ended up playing for the Statesville Greyhounds, wearing a darker hue of blue against West Rowan as a senior, but everyone understands the difficult circumstances that were at work there. Young, his mother (Dianne), his sister (Ally) and his little brother (Brody) have never stopped being part of the West community.

Bryant’s late father, Scott, head-coached the Falcons for 17 seasons (1998-2014), guided them to 172 wins, nine conference championships and three state titles. Bryant grew up on the West sideline, in the West film room and in the West locker room. When he was a third-grader, West won the first of three straight 3A championships. With all that happening, it was hard not to fall in love with football. Bryant plunged into the sport, head over heels.

West head coach Joe Nixon was a West assistant most of Bryant’s childhood. Nixon left to take the North Rowan head-coaching job and was at North from 2012-14. He came back to West as head coach in 2015, after heart issues that first surfaced in 2011 finally led  to Scott Young’s resignation.

As a sophomore in 2015, Bryant Young was the backup varsity QB for the Falcons. He threw four touchdown passes, but playing time was sporadic. Bryant was backing up Kacey Otto, a talented senior and the Rowan County Offensive Player of the Year.

“I remember watching Bryant playing in YFL, then he was a ball boy for us, and then he was playing for us at West when I came back,” Nixon said. “Bryant is a West Rowan guy and always will be.”

Scott Young made it a priority prior to Bryant’s junior season to find a place where his son could learn and grow as a starting quarterback. When Scott was hired as the head coach at Charlotte’s Independence High in 2016, that search appeared to be over. Father and son looked forward to being a mentor/quarterback team, but then Scott abruptly was fired in mid-August with a new season only a week away.

The displaced Youngs landed on their feet at Statesville High, where coach Randall Gusler graciously offered a fresh start to a long-time friend and his son. Gusler found a place on the coaching staff for Scott and he found quarterback reps for Bryant, even though he already had a pretty good quarterback. On opening night against Hickory, Bryant got some playing time and completed seven passes. That was a vital first step.

“I’ll always be thankful to Coach Gusler for giving us a home,” Bryant said. “But it was a pretty hard season, getting to Statesville as the season was starting and not really knowing anyone.”

It  was almost six weeks before Young threw his first TD pass for the Greyhounds against Lake Norman. By October, he was starting. On Oct.28, he completed 21 of 26 passes and threw for three touchdowns in a win against Alexander Central. Bryant still had things to learn, as he was hurried into eight interceptions against strong South Iredell and Weddington teams, but he finished that season with 10 touchdown passes and more than 1,000 passing yards.

The summer between Bryant’s junior and senior years was filled with football camps. Scott made a determined push for Bryant to improve and to get his name out there. Father and son bonded more deeply than ever through countless miles on the road, traveling to all those camps.

The camps served their purpose. Bryant’s senior year was outstanding. He led Statesville to a 9-3 record and threw for 2,126 yards and 19 touchdowns. He was extremely accurate, completing 143 of 215 passes. That’s a 66.5-percent completion rate. He was All-North Piedmont Conference.

“Things were a lot different my senior season, due to being at Statesville for all the preseason reps,” Bryant said. “I developed strong communication with really good receivers. We had our timing down, and when we needed to play well, we usually played well.”

Three of Bryant’s finest games came in NPC contests against Rowan schools late in the regular season, even as his father’s health was rapidly deteriorating.

Playing against East Rowan, his father’s alma mater, at Greyhound Hollow, Bryant was 18-for-23 for 254 yards and three touchdowns.

And finally, to close the regular season, Statesville made the trip to Mount Ulla to play the Falcons in a scenario right out of  a Hollywood movie.

“When we pulled up on the bus, the emotions just about overwhelmed me,” Bryant said. “Running down the hill into the stadium felt the same as it always had, but then after the captains met, I’m going to the visitors sideline, not the home sideline.”

Even the folks who doubted Bryant tipped their helmets when that one was over. Bryant had played his best for his father. In Statesville’s 34-24 victory, in a battle for second place, Bryant was 21-for-31 for a career-best 318 yards and four touchdowns.

“To play well at West Rowan, with my dad watching, with so many friends that I’d grown up with watching, that game meant everything,” Bryant said.

In three games against Rowan opponents, Bryant threw 11 touchdown passes, ran for a touchdown, and didn’t throw an interception.

“Bryant just lit us up,” Nixon said. “He’s been learning to be a quarterback since he could walk, and he did a great job this year for Statesville. He earned all-conference with a very solid year and he could get into that quarterback mix at Wingate.”

Twelve days after Bryant’s memorable performance at West Rowan, five days after he’d ended his high school career with a playoff loss to Southwest Guilford, his father passed away at 45 years old. Scott had hung on as long as he could.

Bryant looked at a lot of colleges, but Wingate offered the most promising future destination. He’ll be going off to school, which is something he wanted, but he’ll only be 60 miles from home. Bryant was impressed with Wingate head coach Joe Reich, and no doubt, Reich was impressed with him.

“I love the staff at Wingate and I love what they’re about,” Bryant said. “They want you to succeed in life long after your football eligibility is done.”

And so Bryant (6-0, 195) put a pen to paper last week and joined Wingate’s program. He signed while seated next to Devin Turner, West’s stout defensive lineman, who is headed to St. Andrews. They have been like brothers for many years.

“Seeing Bryant and Devin sign together here, that’s just a good day for all of us,” Nixon said.

Gusler couldn’t be at the signing in Mount Ulla in person because he had a Greyhound signing at Statesville at the same time, but he was there in spirit.

And so was Scott Young.

Bryant is a 4.0 student, so he could do anything he wanted with his life, but his future ambition won’t surprise anyone. His father was the biggest influence on him, so Bryant has his heart set on being a P.E. teacher and football coach.

“I love football too much not to want to coach it,” Bryant said. “I want football to always be a big part of my life.”