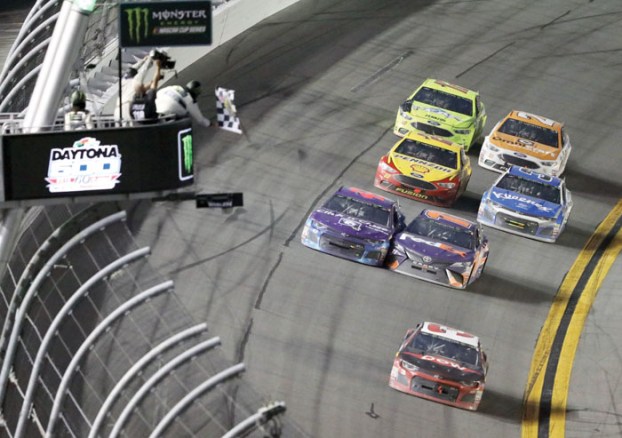 NASCAR heads to Atlanta with a Daytona 500 hangover

Denny Hamlin? Well, he’s in the middle of another feud, and it’s only the second week of the season.

NASCAR moves from the Daytona 500 this weekend to Atlanta Motor Speedway with a bit of a hangover from the biggest party of its season.

Hamlin earned a call to the NASCAR hauler for a comment he made last week on the “Barstool Sports” podcast in which he claimed 70 percent of NASCAR drivers take the prescription drug Adderall to help with concentration.

Adderall is on NASCAR’s banned substance list without a doctor prescription.

Hamlin claimed it was a joke made on an irreverent podcast, but Wallace didn’t let it go after nudging Hamlin for second place in the Daytona 500. The two raced door-to-door to the finish, and Hamlin has repeatedly said the contact cut his tire.

But after his historic second-place finish — Wallace was the first black driver in the Daytona 500 field since 1969 — he took a shot at Hamlin for the final lap racing that in Hamlin’s mind went too far.

“He might need to take some Adderall for that one,” Wallace said on the Fox broadcast after he climbed from his car.

Told of the crack in his post-race news conference, Hamlin again maintained Wallace’s contact had cut his tire. He didn’t respond to the Adderall mention and exited the room.

Once outside the media center, he bumped into Wallace, and the two had a brief but heated exchange.

Public sentiment is on Wallace’s side — few fans have forgiven Hamlin since he wrecked Chase Elliott at Martinsville last fall — and Hamlin angrily took to Twitter to tell his side of the story.

Hamlin late Tuesday night called his Twitter critics “idiots,” and explained he had no beef about the ending of the race. His problem was the final question of his news conference, when he was asked for a response to Wallace’s remark.

“I had no issue until not only did he place blame on me but then went on to make personal comments about myself. I left the media center and saw Bubba 30 secs later,” Hamlin posted in a series of tweets.

“Anyone who wouldn’t take offense to the stupid things that was said has absolutely no backbone. I have one,” he concluded.

Wallace was dubious of Hamlin’s take on the last-lap racing on Sunday night, but believed the two would move on to Atlanta and be fine. He did, however, wonder if he was going to be kicked out of the Hamlin-led recreational basketball and golf leagues.

Turns out, though, that it wasn’t just NASCAR that was annoyed with Hamlin’s Adderall assessment.

“Those 70 percent of drivers he referred to are mad,” Harvick said. “Whether he thinks it was an off-the-cuff comment and something he meant to say or not to say, it still offended most everybody in the garage. If you’re going to play around, joking and think it’s not something that everybody is going to take offense to. I think he’s probably seeing that nobody really appreciated it and it put everybody in a bad spot.”

Angry drivers are just one of many things to keep an eye on at Atlanta.

NASCAR had allowed a maximum 43 cars starting in 1998, and hit that number until only 42 cars showed up at a 2014 race in Kentucky. Under the charter system, with only 36 cars guaranteed spots in the field, NASCAR cut the field to a maximum of 40 each week.

But the bulk of the purse goes to the chartered teams, and it’s a financial burden for “open” cars to show up every week and fight for the remaining four slots in the field.

The new charter system meant that only 40 cars tried to make the Daytona 500, which made the qualifying races pointless because no driver was battling for a spot in the field. Asked about the small car counts at Daytona, NASCAR executive Steve O’Donnell said the series prefers a strong entry list over backmarkers and field fillers.

“I think it is one of the best fields we’ve had, it’s deep,” O’Donnell said. “In the future, would we like to see more? We probably would. But when you look across all of sports now, the idea of sending someone home with a major sponsor, it just doesn’t happen in sports today. It’s not just a reality for NASCAR, it’s all motorsports, and sports in general.”

“What we need is the continuity with all the same drivers and cars running across the whole season,” he said. “I think this is really a sign of the times, and that’s the way it’s going to be.”

And, keep an eye on the Toyota teams, especially Martin Truex Jr.

The most dominating manufacturer of 2017 came up empty at Daytona, and Truex, the defending series champion, led just four laps in three races. Toyota drivers did not win a single Cup event at Daytona.

But Atlanta at 1.54-miles is in Truex’s wheelhouse, and he won seven races on intermediate tracks last year. Truex’s average finish last year in 11 races at 1.5-mile tracks was second.

“While Daytona is the biggest and most prestigious race to win, the season actually starts at a downforce track,” Truex said. “Atlanta should give us a good indication how we fare against the competition.”

So, yeah, NASCAR rolls its show into Atlanta with everyone mad at Hamlin, Wallace out to prove he’s the real deal and Truex and the Toyota camp trying to reclaim their footing.

Buckle up, it’s going to be a long season.

From staff reports Six Rowan County basketball teams advanced to tonight’s second round of the state playoffs. Only the Carson... read more