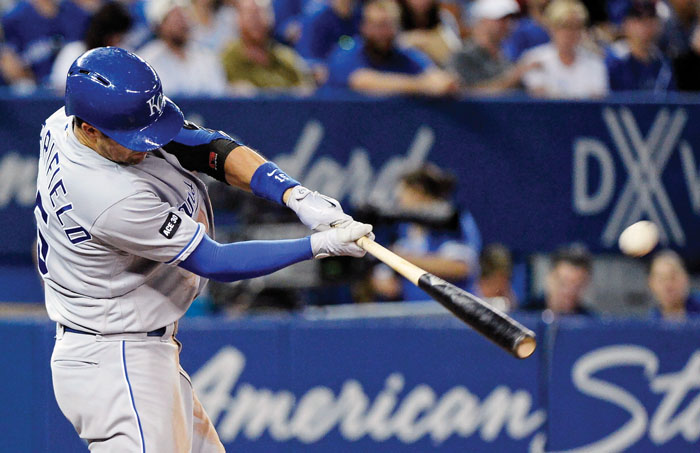 Nathan Denette/The Canadian Press via AP, File ... In this photo from last Sept. 20, Kansas City Royals’ Whit Merrifield hits a solo home run against the Toronto Blue Jays during a game, in Toronto. Merrifield, from Davie County, fought every spring to make the Royals roster, usually to no avail. Once he broke through, he made sure he would never give his spot away.

SURPRISE, Ariz. (AP) — Nobody saw this coming, not even the Kansas City Royals.

Whit Merrifield has gone from an afterthought to the American League stolen base champion. He has gone from more than 2,500 at-bats in the minors to the Kansas City starting second baseman.

He began last year with Triple-A Omaha, his eighth straight season to open in the minors. He finished it hitting .288 with 19 home runs, 32 doubles, 78 RBIs and a league-leading 34 stolen bases.

“The most impressive thing to me about Whit Merrifield is his work ethic and how he has gone from just being an organizational player to a very, very solid major league player,” Royals manager Ned Yost said Wednesday. “I don’t think anybody three years ago would have projected Whit to be the player he is today.

The 29-year-old Merrifield was a 2010 ninth-round pick after helping lead South Carolina to the College World Series title.  He was never considered a prospect.

“My path to where I am, I think it gives some guys a little bit of hope that don’t have the prospect’s headlines or people really haven’t taken notice to what they can do,” Merrifield said. “You get your shot, take advantage of it; you can play at this level.”

“It’s pretty cool,” Merrifield said. “I didn’t really know that it was close. I wanted to get to 30 and someone told me, how does it feel to be tied for the lead in the American League? I had no idea. So I tried to revamp it a little bit and be a little more aggressive on the basepaths. I ran a little more than I should have. I ran in situations I probably shouldn’t have. I wanted to win that title and it worked out.”

While Alcides Escobar is back at shortstop, Merrifield will have to adjust to new corner infielders. He said chemistry needs to develop between the first baseman and second baseman, as they learn each other’s range.

“I’ve played with the guys that are competing at first, so I have a little chemistry with them,” Merrifield said. “Other than that, it’s just about catching a ground ball and throwing it to first. So I think I’ll be fine.”

Maybe not that simple. Eric Hosmer is a four-time first base Gold Glove winner, but he left to sign with the San Diego Padres. Throws to first base will have to be more precise this season as Hosmer has saved his infielders a plethora of throwing errors over the years with his ability to scoop the low throws and use his 6-foot-4 height to reach the high tosses.

“Hos is one of the best first basemen in all of baseball,” Merrifield said. “There’s a lot of room to miss with him. It’s a luxury not everybody has. I think we kind of got a little spoiled with it. Whoever is going to play first base for us, we have some good first basemen with some good talent, but there is only one Eric Hosmer over there playing first, so we might not have as much room to miss as before.”